Keep moving. Keep learning. Share your hobby with others. 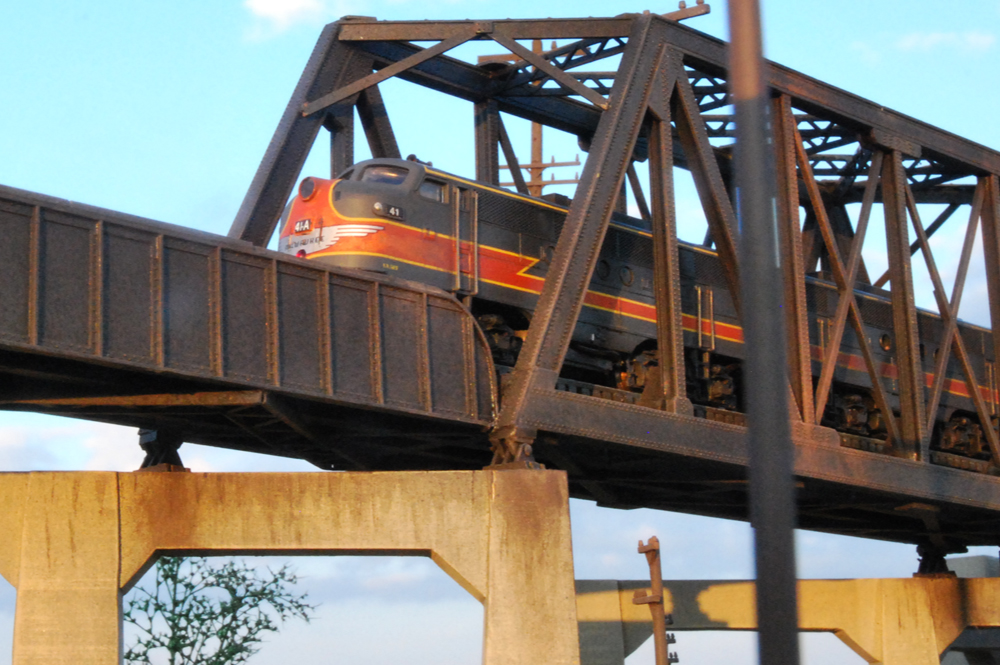 In the second grade, I started reading Model Railroader in the school library. After a year of heavy lobbying, I got my first Tyco HO train set for Christmas in 1973. It had a powered Santa Fe F7A locomotive with a “dummy” F7B unit painted in the red-and-silver warbonnet passenger scheme. It came with a Baby Ruth reefer, a Santa Fe piggyback flat, a Great Northern flat with semi tractors, a Shell tank car, a Santa Fe caboose, and a big circle of Snap-Track. It was quite the unlikely start for a future prototype modeler, but I thought it was the greatest thing ever.

I can still feel the excitement of watching the headlight go around the darkened basement and remember the smell of the warm electric motor. Within a week, I wore down every eraser in the house trying to keep the brass track and wheels clean.

I built my first layout using a track plan called “The Yardmaster” found in the Atlas Blueprints book. The layout was made from anything I could scrounge: little bits of wood, Matchbox cars, leftover plaster, house paint, sand, rocks, sawdust, and little tree-like weeds that I used to build a forest. (The weeds turned out to be ragweed, and I had to pull them out because I couldn’t stop sneezing.)

I wanted my layout to look “real.” I was so inspired by an MR article called,  “Develop a Freight Car Fleet,” that I bought an airbrush and started painting and decaling my own CNW equipment using Gordon Odegard’s “Paint Shop” column in MR as my guide. Articles like “Milwaukee’s Stowell Yard” in the January 1972 issue of MR inspired me to build from prototype photos, maps, and on-the-ground research.

I combined crosstown bus trips to the railroad yard with visits to Gary’s Uptown Hobby Shop. I used most of my paper route money to buy model train supplies and film for railfan research. I started buying cars and buildings to match local industries and scratchbuilt a cardboard version of the Morton Salt plant in Chicago. I studied every aspect of the Chicago & North Western and the Milwaukee Road. I learned about local abandoned interurban lines at the public library and along the bicycle paths.

I built an even larger Atlas Snap-Track layout, the Rancocas Harbor Belt. It was lots of fun, with bridges, a harbor, and a switch yard. It turned out to be too much of a spaghetti bowl. I couldn’t run prototype-looking trains on 18” radius curves.

Then I saw the CNW Historical Society display and MR’s Clinchfield layout one year at Trainfest. The Reid brothers’ layout had just appeared in MR’s January 1989 issue. Something clicked in my mind. I could switch to N scale and build large prototype-based scenes of my local area. I sold everything and never looked back.

Follow your own rules, then break them. Do what makes you happy.

There are so many choices in this hobby: prototype, freelance, toy trains, and collecting. Only you know what sparks joy — and remember that it can change over time.

If I take a moment to think about it, I’m reminded of what the 20th-century sculptor Alberto Giacometti told his biographer James Lord, “The more you struggle to make it life-like, the less like-life it becomes. But since a work of art is an illusion anyway, if you heighten the illusory quality, then you come closer to the effect of life.”

That’s what I’m after, the joy of creating a momentary flash of a particular place and time, an interpretation of something that once was that now only exists in archives, railroad museums, and memories. The illusion of something ordinary can become something eternal, the forever day— the song of a lifetime.

I see my biggest modeling success in each new day that I’m happily building something. I love researching and building prototype scenes, then photographing them outdoors to capture an eternal moment. It all started with the NMRA National meet in Madison, where I learned about prototype modeling and started attending their conventions.

I started photographing models to illustrate the magazine articles I was writing. Seeing close-up images of my models made me improve my modeling. Creating a beautiful image of a model became a newly discovered part of the hobby for me. Writing books, articles, and taking photos is a way to share my models. Otherwise, they would just sit in darkened drawers and cabinets, and no one would be able to enjoy them.

I’ve been scratchbuilding various depots that are incorporated into modules on the Modutrak layout. I’m more of a builder than an operator, so to see all the models in motion on the scenic Modutrak layout with all its technical wizardry is absolutely magical. Being a part of an extended modeling community provides the assistance I need to bring my creative ideas into being. I never could have accomplished any of this on my own. The Modutrak layout is usually displayed at train shows in the upper Midwest. Our next NMRA show is in Indianapolis at IndyJunction. Our website is: www.modutrak.com.

My biggest mistakes are all the models I never attempted because I spent too much time thinking and waiting until everything was perfectly figured out. This never happened, and in the end, the momentum was lost, and they never got built.

All of my modeling mistakes have been great learning opportunities. After a misstep, I end up scrambling to save the project and often end up with a better project. This is especially the case with weathering and scenery.

I just finished a new book titled “Model Realistic Freight Car Loads.” It will be available in Fall 2022 from Kalmbach Media. I took all the prototype freight car research that I’ve done over the years and combined it with beautiful images from the David Ingles collection. There are more than 200 photos that are useful to modelers of any scale who want to build realistic open loads of any kind.

Recently I built lots of open vehicle loads on flatcars using prototype photos and the AAR open load diagrams as a guide. I’m doing an open loads modeling workshop at IndyJunction in May 2022.

My never-ending modeling project is the Chicago & North Western’s lakefront depot in Milwaukee, Wis. It is built without selective compression from company plans from the CNWHS Archives and is almost entirely scratchbuilt. I’ve been working on it for 30 years, and it is around 90 percent complete. It will be part of the Modutrak layout at IndyJunction in May.

Try things that look interesting to you. Get help from other modelers online and in person. NMRA meets and prototype modeler conferences are great places to find people who can answer your questions and solve problems.

Don’t be afraid to break things; it’s how you learn to fix things.

Don’t be so serious. They’re toys.

Find a few things in the hobby that you enjoy and get good at them. Then you have something to share with others. You don’t need to be an expert in all things.

Go to train shows, swap meets, hobby shops, railway museums, and prototype modeler conferences. Join the historical society of your favorite railroad. Read back issues of MR. There’s a wealth of information there.

Practical advice on layouts: Start with Kato Unitrack or a similar product. The learning curve is too steep to attempt benchwork, track laying, ballasting, and wiring right at the beginning. Use Unitrack to play around and learn what kind of track plans you like. Yards and switching? Straight mainline runs? Curving tracks that go up and over? You can try it all. The track stays connected but is not nailed down and it is easy to rearrange. You don’t have to commit to a track plan. You can experiment and learn. It allows you to run your cool trains right away without having to spend years building a layout.

Don’t try to build a big layout right away. Start with a small module or diorama scene that you can later incorporate into a larger layout, put on a shelf or toss in a dumpster to start again. It’s fun to have something completed that is portable, something that you can show to others.

If you don’t have much space for a layout, try a T-track module or a streetcar layout. A small start allows you to try all aspects of the hobby: track, scenery, structures, wiring, operations, and building rolling stock. It’s hard to get to scenery and operations if it takes a few years to work through the benchwork, track and wiring phases.

Pick out some track, cars, buildings, vehicles, and detail parts. Start arranging them. Watch some scenery videos and give it a try. Find what feels good. Have fun!

Don’t get stuck. Keep moving. Keep learning. Share your hobby with others.