Home / How To / Prototype Railroads / What’s in a photograph?: Cotton Belt on the MoPac at Gorham, Ill.

A fast freight rides a two-railroad speedway in May 1971 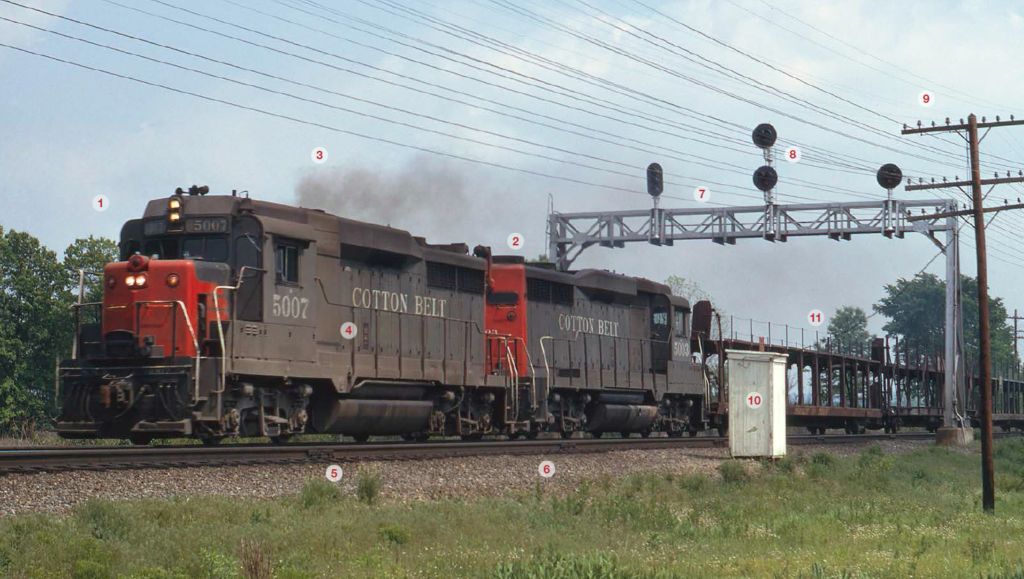 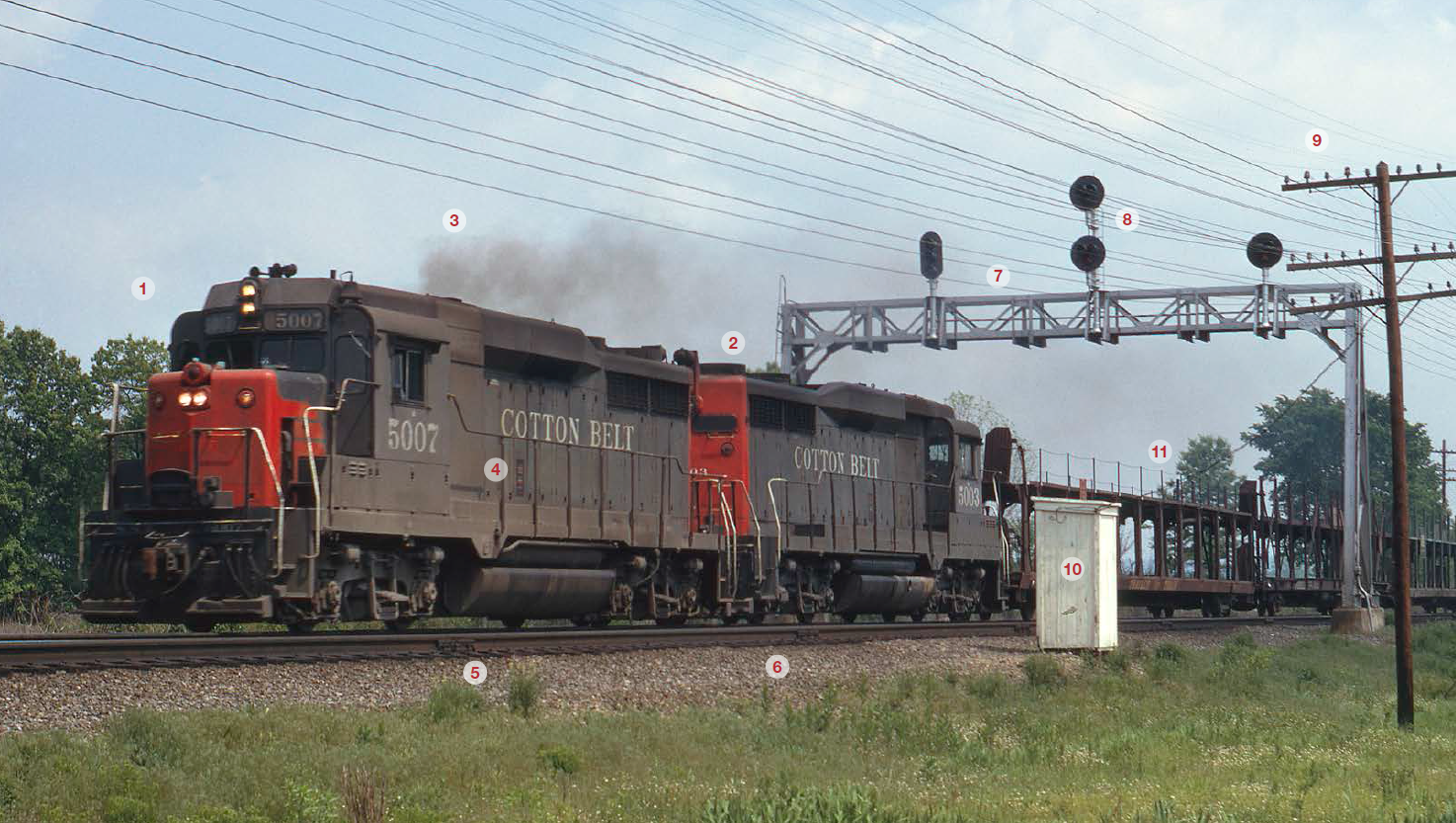 A fast freight rides a two-railroad speedway in May 1971.

Jerry A. Pinkepank
1 Cotton Belt freight. A St. Louis Southwestern Railway (SSW, common nickname Cotton Belt) freight rolls north on Missouri Pacific tracks May 8, 1971, at Gorham, Ill., on the 123.7 miles of MoPac trackage rights Cotton Belt used to reach the Illinois side of the St. Louis terminal complex at Valley Junction, Ill. The line was built in 1905, when George Gould owned both roads, and included a spectacular Mississippi River bridge linking Thebes, Ill., and Illmo, Mo., where the two railroads met. After both MP and SSW went into bankruptcy, Southern Pacific in 1932 acquired the Cotton Belt, providing SP with entry to both the St. Louis terminal and Memphis. Although the roads had become bitter rivals by this time, MP still had to host SSW because, under Federal regulations, trackage rights once granted are a Certificate of Public Convenience and Necessity and cannot be revoked; the Interstate Commerce Commission required reasonable contract terms and equal treatment of operations. (Today, this is no longer relevant on this line since both MP and SP have been merged into Union Pacific.)

2 GP30s. The GP30 was General Motors’ hasty response to General Electric’s 2,500 h.p. U25B, but 2,250 h.p. was all GM’s Electro- Motive Division felt comfortable in forcing into its relatively small traction motors at the time. GM automotive stylists were asked to devise a novel appearance for the GP30, resulting in the distinctive rooftop profile. A total of 948 were built during 1961–63 (Cotton Belt got 10) before the model was succeeded by the GP35, which had a more angular roofline. By 1971 it was rare to see GP30s in top-line service like this.

3 Injector trouble. EMD used a gearing arrangement at lower rpm’s on its turbocharged locomotives like the GP30, so unlike the turbocharged units of other builders, EMDs did not normally emit much if any black or brown smoke. This exhaust suggests sticky injectors.

4 ACI label. Automatic Car Identification was a color barcode system designed to be read by wayside scanners, and the labels were required on all interchanged rolling stock by vote of the carriers through the Association of American Railroads. Because locomotives often ran through to connecting roads, and because railroads wanted to track their own power, most line-haul locomotives got labels as well. The requirement for interchange equipment to carry ACI labels lasted from 1967 to 1978, when it was terminated by another AAR vote due to disagreements about keeping the labels clean or replacing them. More than a decade later, a radiobased system, Automatic Electronic Identification (AEI), not dependent on clean labels, was adopted in place of ACI.

5 Jointed rail. MP owned, maintained, and dispatched this line. The track consists of 132-lb. (per yard) rail joined with 36-inch-long, six-bolt joint bars, with the nuts placed on alternating sides to help counter the tendency of bolts to work loose. MP was slow to adopt continuous welded rail but had begun to install it by 1971. Before that, it had tried using the proprietary Huck bolt, normally used in freight-car construction, in place of conventional bolts, intending to make the joint as firm as a weld. The perfect surface condition under load evident in the picture shows that MP knew how to keep jointed track in top shape. Normally, track would be visibly depressed at the joints under the weight of the locomotives, but not here. MP normally preferred an unusual 119-lb. rail section, but it was a common phenomenon in trackage-rights maintenance that, because expenses were shared, the maintaining road would apply higher standards to the joint line, and in this case the high gross ton-miles of this busy railroad warranted the greater beam strength of the heavier rail.

6 Deep ballast, no shoulder. It was once common not to fill the crib (the space between the ties) full of ballast, even on heavyduty lines, and the ends of the ties were generally left exposed too. By the 1960s it was the practice to fully fill the crib, but only with welded rail did it become a requirement to provide a big shoulder of ballast, typically 12 inches out from the tie end, to contain the powerful lateral forces set up by summer temperatures in continuous welded rail, even with the increased number of rail anchors normally applied to keep the rail from “running” (sliding longitudinally over the ties from thermal expansion or the pressure of heavy braking). This ballast illustrates good practice for jointed rail. Note the lack of mud splashes on the rail, otherwise common at joints.

7 Signal gantry. When MP acquired the west half of the Chicago & Eastern Illinois in 1968, MP’s branch from Gorham to Benton, Ill., became the route to connect MP to Chicago via the C&EI. The branch had a wye connection and a crossover that needed signaling under Federal rules specifying that signals must be placed to the right of the track governed (rules that had just been relaxed in 1971 but applied when these signals were installed.) To accomplish this, a signal bridge or gantry was required.

8 Color-light signals. MoPac did not like searchlight signals, which most roads would have used in a Centralized Traffic Control (CTC) installation like this. In fact, MP so disliked them that when it took full control of longtime subsidiary Texas & Pacific, it replaced T&P’s searchlight signals with color-light types. Although almost universally accepted by railroads generally, the moving part that provided the color changes in a searchlight signal was a maintenance issue and a potential source of false proceed indications, so MP eschewed the design.

9 Pole line. In the classic era, you could always tell a main line by the multi-crossarm pole line marching alongside it. By 1971 poleline- based communication systems were being replaced by microwave or phone company leased lines and now have largely vanished.

10 Telephone booth. Wherever there was a CTC control point in the classic era, there would also be a railroad telephone, because, before universal use of radio on locomotives, if a train came to a red home signal, the crew was required by rule to go immediately to the nearest phone and contact the dispatcher. A small phone box on a pole was more common, but MP liked full-fledged phone booths.

11 Bi-level auto-rack car. From their introduction in the 1950s into the 1980s, auto-racks were open; shippers eventually insisted on adding sides and roofs to reduce damage. The rack structure is separate, attached to an 89-foot TOFC-style flatcar. Bi-levels were used for trucks and vans, tri-levels for automobiles.

This article was originally published in the Fall 2014 issue of Classic Trains magazine.

One thought on “What’s in a photograph?: Cotton Belt on the MoPac at Gorham, Ill.”