A collision couldn’t keep Canadian National C40-8W no. 2191 down 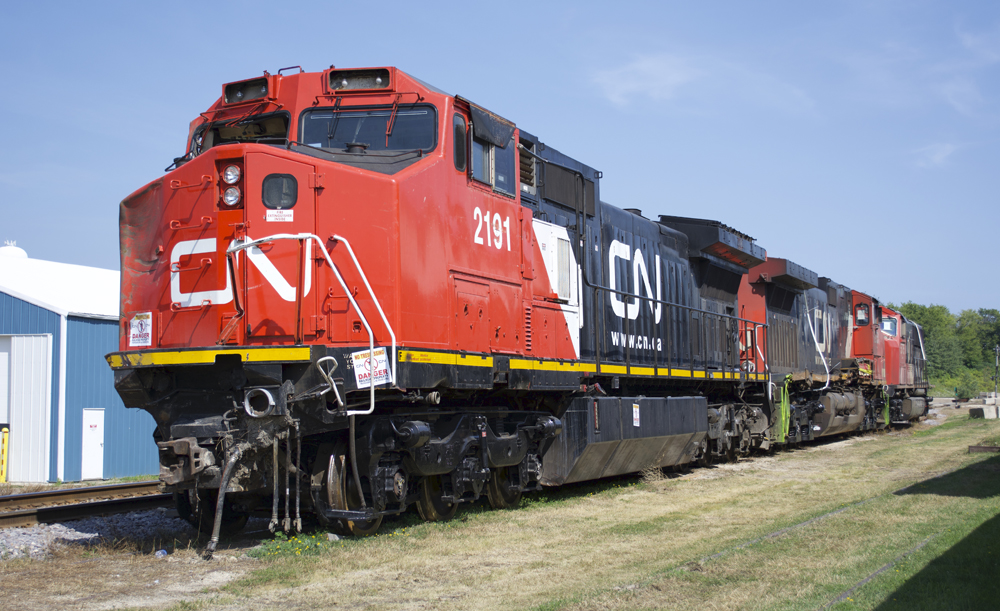 Transporting a damaged locomotive: Morning came early on Monday, July 21, 2014. The evening before I’d returned from Cleveland, Ohio, after attending the National Model Railroad Association National Convention and National Train Show. Naturally, I was pretty tired from the busy week. When the alarm went off, I flipped on the radio to listen to the morning news. The lead story was about a collision between Canadian National and Wisconsin & Southern trains in Slinger, Wis.

By the time I visited the derailment site in the late afternoon, traffic was flowing through the village with limited detours. A friend who worked at a business close to the derailment was able to get me a bit closer so I could take photos. That’s when I first noticed Canadian National General Electric C40-8W no. 2191 laying on its side.

As the derailment cleanup progressed, the 2191 was set upright and a new front truck was placed under the unit. The locomotive, along with CN General Electric C44-9W no. 2651 and Electro-Motive Division SD75I no. 5775, were then carefully moved to a siding on the WSOR west of the derailment site. To discourage people from getting too close to the wreck-damaged diesels, no trespassing stickers were applied to the sides and end of the 2191. The 2651 and 5775 were moved from the siding a few days later and sent off for evaluation and rebuilding. The 2191, the more severely damaged of the trio, remained in Slinger.

When I was driving through Slinger a few weeks later, I noticed the 2191 had moved. It was now on top of a QTTX heavy-duty four-truck flatcar. I later learned the unit was being prepared for transport to National Railway Equipment in Silvis, Ill. Since this interesting load could easily be photographed from public property, I took some time to document how the locomotive was loaded onto the flatcar.

Section 3, Part 2 of the AAR Open Top Loading Rules Manual (Association of American Railroads, 2017) has illustrated and written instructions covering how to secure a locomotive to a flatcar. Under the front and rear bolster is a cribbing made of 6 x 8 hardwood assembled with ¾”-diameter rods with threaded ends. Washers and nuts are placed at each end of the rod. The outer rods pass through the car floor and a ½” x 4” x 18” steel plate underneath deck. The outer rods are secured with nuts.

The diagram I have, dated 9/92, calls for 4 x 8 hardwood blocking and 3 x 6 x 48” lumber cleats to prevent the cribbing from shifting. Since these documents are regularly updated, it appears steel angle brackets are now used instead of wood for the blocking and cleats. The tie-down rods between the locomotive and flatcar deck are 1”-diameter with threaded ends. Though not visible in this photo, there are ½” x 3” x 6” steel plates with washers and nuts where the rods are attached to the locomotive. The ½” x 4” x 10” steel plates with washers and nuts can be seen where the rods pass through the edge of the flatcar deck.

The diagram shows end-frame blocking made of 6 x 8 hardwood and 4 x 6 lumber placed between the cribbing and locomotive. However, steel was used instead of wood here as well. The end-frame blocking can be seen just of the left of the front coupler, next to where the steps would normally be located.

To model this load, you’ll need a damaged locomotive (No, I don’t recommend dropping your prized diesel on the floor. Perhaps a nice, but used, locomotive found at a model railroad swap or online auction website would be a better choice.) Walthers offered an HO scale QTTX four-truck heavy-duty flatcar several years ago. Though no longer in stock from the manufacturer, the flatcar still shows up regularly in the secondary market.

Naturally, I was curious what became of CN 2191. Thanks to various railfan photo sites, I was able to find out. About a year after I photographed the locomotive sitting on a flatcar in Slinger, I was surprised to come across an image showing the rebuilt unit in primer at National Railway Equipment. By mid-December 2015 the locomotive had been repainted and put back in service on the CN. Pretty amazing!