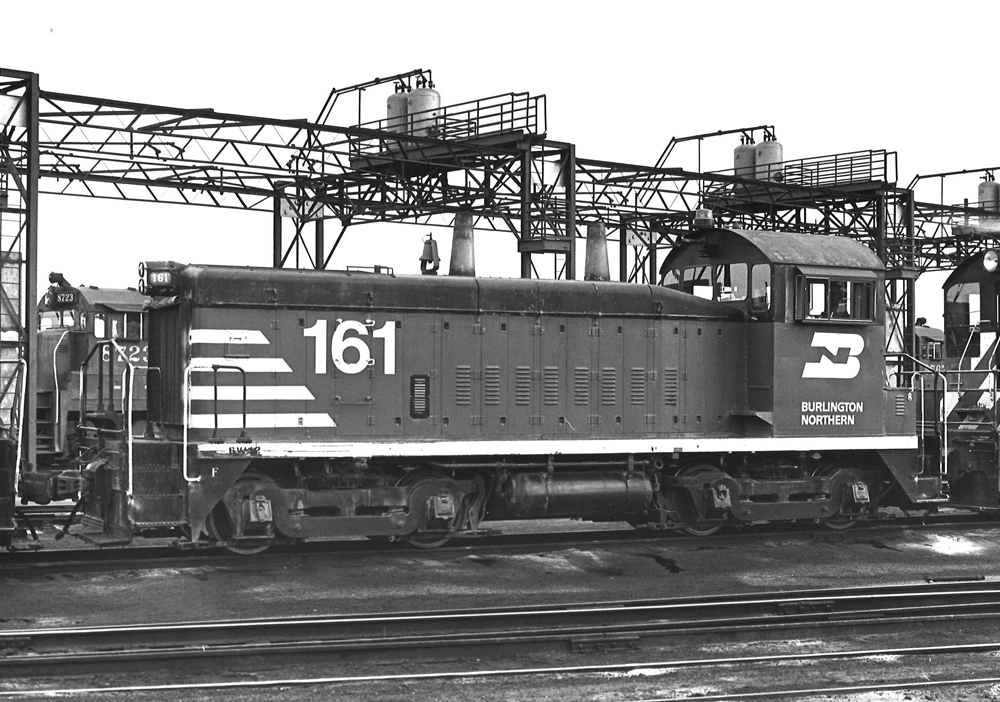 Burlington Northern locomotive one-offs. Burlington Northern (BN) had more than 2,000 diesel locomotives on its roster. With a fleet of that size, it shouldn’t come as a surprise that there were more than a few Burlington Northern locomotive one-offs. Paint scheme variations, wreck rebuilds, and test subjects were among the examples I found when searching through the photo files in the David P. Morgan Memorial Library here at Kalmbach Media. You can find other examples in books on BN diesel locomotives and when searching through images on railfan photo websites, such as LocoPhotos, Railpictures.net, and Fallen Flag Railroad Photos.

The five Burlington Northern locomotive one-offs here are all Electro-Motive Division (EMD) products, ranging from yard switchers to road units. Some of the one-offs would be fairly simple to re-create, such as SW9 No. 161. Paint the sills white, add some Chicago, Burlington & Quincy (CB&Q) switcher stripes to the hood, and you’re there. Others, like GP9 No. 1965, GP30 No. 2211, and SD24 No. 6253 will require various levels of kitbashing. If you’re up for more of a challenge, you can give SDP45 No. 6599 a try. Shortening the fuel tank would be easy; modeling the articulated High Traction BB truck will probably put your modeling skills to the test.

If you’re looking to add a modeling project to your to-do list, consider one of these Burlington Northern locomotive one-offs.

Burlington Northern was formed on March 2, 1970 when the Chicago, Burlington & Quincy; Great Northern (GN); Northern Pacific (NP); and Spokane, Portland & Seattle (SP&S) merged. Cascade Green and black was selected as the new paint scheme for the railroad’s locomotive fleet. With a large fleet to repaint at various locations, there were bound to be some paint scheme variations. One example is Electro-Motive Division SW9 No. 161.

The end-cab locomotive was built in September 1951. For a brief time, the unit was used as EMD demonstrator No. 9270. It retained that road number after it was acquired by the CB&Q. When the switcher traded in its black-and-gray paint for BN colors, the shop forces painted the sills white and added CB&Q-style stripes to the sides of the hood. Eventually the SW9 would be repainted in the standard BN switcher scheme with green sills and no hood stripes.

The 161 was retired in November 1984. It was acquired by Ladish Malting, renumbered LM-2, and assigned to the company’s Spiritwood, N.D., facility.

Burlington Northern GP9 no. 1965 was picked as a test bed for the railroad’s natural-gas fuel experiment, as noted on page 47 the November 1983 issue of Trains magazine. The four-axle road unit didn’t have sufficient room for extra employees that would be riding along during testing. To make room for them, a “parlor” was added to the high short hood. Windows were added to the sides and front, and a personnel door was installed on the engineer’s side of the hood, just in front of the cab.

Later, sister GP9 No. 1961 was selected for the natural-gas fuel program, and the 1965 was put back into regular service. The 1965 survived into the BNSF era, slated to be renumbered 1632. The GP9 was retired in November 1996, prior to renumbering. But the retirement was short lived. The unit, complete with its modified high short hood, went to California to become Coast Rail Service No. 1965.

Burlington Northern GP30 No. 2211 started life as Great Northern No. 3011. The four-axle road locomotive was built by Electro-Motive Division in May 1963. The unit was renumbered 2211 when it became part of the BN fleet.

In 1978, the GP30 collided with another freight train on the Oregon Trunk. The collision crushed the short hood and cab. Forces at BN’s West Burlington, Iowa, shops rebuilt the locomotive with a new nose and Spartan cab. The air intake portion of the long hood was also modified. The road locomotive was put back into service on December 22, 1978.

The rounded windows on the cab sides were covered at some point after the rebuild. The 2211 was retired in May 1985.

The 6253 was involved in a grade crossing accident in August 1975 at Henderson, Ill. Similar to the 2211, the 6253 was shipped to West Burlington, Iowa, for rebuilding. When it emerged from the shops two months after the accident, it had a low short hood and rebuilt cab.

Burlington Northern 6253 was retired in June 1982. The locomotive was traded to General Electric for credit on the railroad’s order of B30-7A booster units.

In 1984, the 6599 was selected as a test bed for EMD’s four-axle High Traction BB, or HTBB, truck. The rear truck was described in the Burlington Northern 1980-1991 Annual by Robert C. Del Grosso (Hyrail Production, 1991) as “self-steering, self-guiding, four axle, high-adhesion, and articulated. As a single four-axle truck presents excessive wear problems, the sideframes are two-piece, rotating about a central pedestal.” The front truck had three axles.

The front and rear trucks were painted silver on the modified locomotive. The 6599 demonstrated on Stampede Pass in Washington from September 9-22, 1984. The rear truck was to be replaced after the test period. However, the locomotive kept the HTBB truck through March 1987, when it was replaced with a standard three-axle truck. The locomotive was retired later that month.