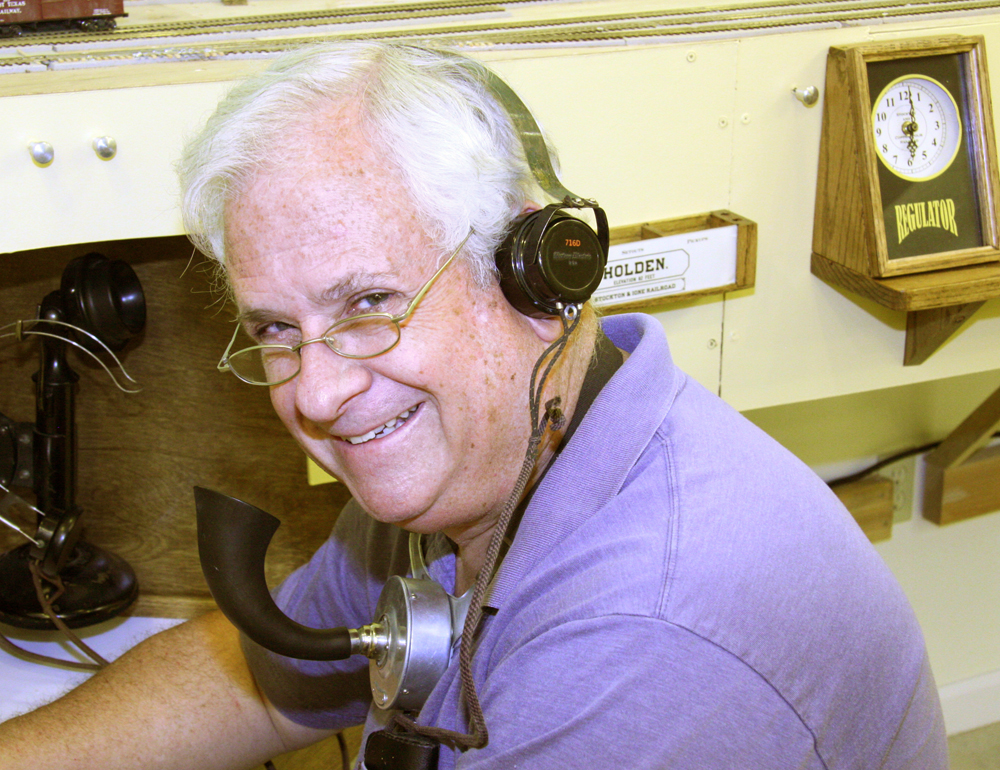 The Stanislaus River bridge was a signature scene on Don Ball’s HO scale Stockton & Copperopolis layout. He scratchbuilt the structure following prototype photos and plans. The project was covered in the August 2016 MR article “Scratchbuild a wood trestle and truss bridge.”

Don wrote “Building a model railroad telephone system” in the November 2015 issue of MR. In the story, Don explained how he combined vintage equipment and modern components to get a working system. Don, using a breastplate transmitter and headset, is shown copying orders at the operator’s desk at Holden, Calif., on his HO scale Stockton & Copperopolis.

Horse-drawn wagons were the order of the day in 1895. Don’s highly detailed models were the subject of the July 2015 MR story “Model horses and wagons for a steam-era layout.” Here we see an example of a dray wagon, designed to load heavy objects.

Don added interest to operating sessions for passenger crews by installing working signals for flag stops. After engaging the flag signal on the platform, a woman gathers her bags in preparation for boarding the train. Don shared how he scratchbuilt the detail in the January 2018 MR article “A signal for flag stops.”

Don’s layout may have been set in 1895, but he added a modern twist with Camera Car B. He made the car by modifying a Mantua four-wheel bobber caboose so it could carry a video camera. You can read about the project in “A camera car for the railroad” in the February 2019 MR.

In addition to writing about his own modeling efforts, Don also penned features on other modelers. In his June 2019 article “Modern Minnesota short line,” Don shared the story Alan Saatkamp’s 11’-6” x 21’-0” HO scale Twin Cities & Western. In this scene, diesels from the Twin Cities & Western and sister railroad Red River Valley & Western are gathered in front of the enginehouse in Glencoe, Minn.

Though Don’s HO scale Stockton & Copperopolis was large, he drew visitors into the layout with scenes like this one of a cycling club. Check out “Add interest with mini-scenes” in the March 2020 issue of Model Railroader for more information.

Don Ball model railroad images: Don Ball, a contributor to Model Railroader and Model Railroad Planning magazines, died on January 21, 2022 at his home in Blue Springs, Mo. He was 73 years old. Through the pages of our magazines, Don shared his passion for modeling the 1890s. He wrote about his 11-1/2 x 12-foot Moraga Springs Northern in the 1995 and 2000 editions of Model Railroad Planning. The HO scale layout was inspired by the Sacramento Valley RR in California’s Sierra foothills.

In Model Railroad Planning 2011, Don introduced his 37’0” x 40’-3” HO scale Stockton & Copperopolis. In the years following, Don penned more than a dozen articles for Model Railroader on both his modeling efforts and those of others.

In this photo gallery, we’ll take a look at some of the images Don took for stories that appeared in MR and MRP, as well as the track plan for his Stockton & Copperopolis layout.