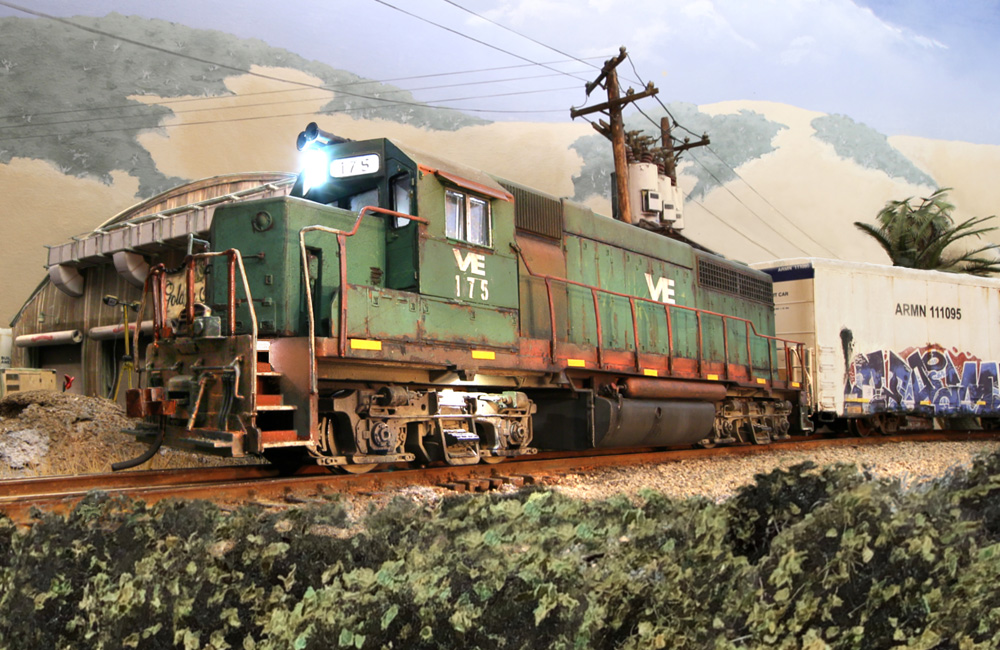 The young railfan on his bicycle will long remember this lucky encounter with the B&O local as it rumbles through Franklin, W.Va., behind Electro-Motive Division GP7 no. 722. The scene takes place on the HO scale B&O Ridgley Division, built by Dale Ridgeway of Bishopville, Md. The locomotive is a Walthers Proto2000 model weathered with chalks; the structures are scratchbuilt. Dale shot the photo.

It’s harvest time on the Visalia Electric, so aging Electro-Motive Division GP40 no. 175 has been pressed into service to handle the early morning reefer run. Rick Sutton of Atascadero, Calif., grew up near Visalia, Calif., and still railfans the VE’s successor, the San Joaquin Valley RR. Rick weathered the Atlas GP40 with chalks and photographed the scene on his HO scale layout. The reefer is a BLMA model with a decal Rick made from a photograph of graffiti on a prototype car.

Brakeman Colpitts waits to align the switch in Callow Yard to clear the way for the departure of Train 154, a loaded coal train headed up by USRA 2-6-6-2 no. 1524, as soon as no. 1305 clears the way with Second 181, which is pulling empties bound for the mines this sunny morning. John Brown of Waubaushene, Ont., photographed the action on his N scale C&O layout. No. 1524 is a Rivarossi model; its fellow Mallet is a United Brass import. The town buildings are from Woodland Scenics.

Steam power is rare on the Northern Highland these days, but two – including no. 6, still lettered for a previous owner – handle switching the car floats and rail ferries that bring in much of the line’s revenues. Here, the tug Celtic moves in toward the car float in anticipation of another trip across the harbor. Rene Mack of Wyckoff, N.J., photographed the scene on his HO scale model railroad. The saddle-tank locomotive is a Bachmann model; the tug is from Model Shipways.

Kanawha no. 2705, a 2-8-4 Berkshire, clears the signals at Sewell, W.Va., as it slowly builds up speed with a northbound coal drag in March 1952. The action takes place on Thomas Maule’s HO scale New River Subdivision layout. The locomotive is a DCC-sound-equipped Bachmann Spectrum model; the coal hoppers are from Atlas’ Trainman line. Thomas scratchbuilt all the structures, including the Royalty Smokeless Coal Co. tipple in the background. He also shot the photo.

Florida East Coast no. 668, an Electro-Motive Division GP9, leads a northbound mixed freight past Gawthrop Lumber, where an FEC boxcar waits for its cargo of lumber to be unloaded onto the lumber yard’s truck. Larry Burk shot the photo on his HO scale FREMO modules, which were scenicked by Marshall Stull. The Geeps are Walthers models decorated by Kevin Baker. The boxcar is from Athearn.