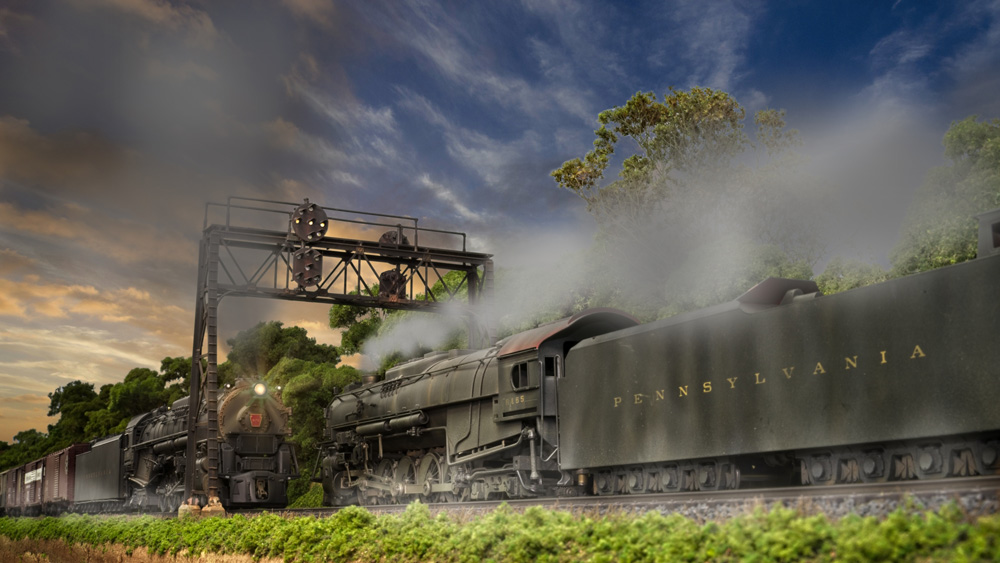 Two Pennsylvania RR class J1’s pass in the early evening, one laboring upgrade with a manifest freight and the other drifting with a train of empty hoppers. The action takes place on Lee Gasparik’s O scale PRR/New York Central layout, which was featured in Great Model Railroads 2020. The layout runs on battery power and radio control. Paul Kahne photo

Mr. and Mrs. Thaddeus J. Ott (of the Philadelphia Otts) wait for the company photographer to emerge with his equipment and shoot their portrait as they “rough it” on their Western excursion. Ron Foreman of Glendale, Calif., took the picture on his HOn3 Devil’s Gulch & Helengon RR. Ron modified the former Denver & Rio Grande locomotive and scratchbuilt the shorty tender to fit on the railroad’s 51-foot turntable. He also kitbashed the Model Die Casting combine.

Bluefield & Allegheny Central Extra 777 South, a 2-8-4 Berkshire, moves a block of reefers through William’s Ridge while a 2-8-2 Mikado passes behind the depot in May 1949. Nathaniel Emerson of Atlanta photographed the fast freight on his freelanced HO scale layout. The Berkshire is a Bachmann model; the Mikado is from Broadway Limited Imports. Nathaniel kitbashed the depot from a Tyco kit.

The eastbound San Diegan rolls through a grade crossing in San Juan Capistrano, Calif., on its two-hour journey from Los Angeles Union Station to San Diego. Alain Kap’s HO scale layout depicts the Atchison, Topeka & Santa Fe’s 4th District, also known as the Surf Line, in the 1940s. The Electro-Motive Division E1 is a Broadway Limited model, and the passenger cars are from Wm. K. Walthers. Alain shot the photo.

Canadian Pacific Electro-Motive Division SW9 no. 7400 is reflected in a pond as it pulls a pair of empties on its way to the Bluebell silver mine to switch them out for loaded ones. Scott Cornelsen of Mendon, Utah, photographed the scene on his N scale CP Kootenay Lake Branch, which is set in 1970. Scott scratchbuilt the conifers using the bottle-brush technique.

Proudly wearing the “Spirit of the Union Pacific” paint scheme commemorating the United States armed forces, UP no. 1943, an Electro-Motive Division SD70ACe, leads its freight train past downtown Truckee, Calif. Andre Peraroyan of Richmond, Calif., built and photographed the scene. The lead locomotive is an Athearn model; most of the structures are from Woodland Scenics.

Now that the mine’s winch cable has been disconnected from the loaded coal hoppers, Rocky Canyon Ry. no 2390 moves in to pick them up and tack them onto the rest of the freight local waiting on the main. Dick Piehl of Whitewater, Wis., photographed the scene on his HO scale model railroad, set in Montana in 1952. The locomotive, a Fairbanks-Morse H15-44, is an Atlas model.

It’s the mid-1950s, and the Pennsylvania RR is as busy as ever, as evidenced by class H10s 2-8-0 Consolidation no. 9422, captured by the camera’s flash as it rushes through the night near Norristown, Pa. Mike Nanton of Camillus, N.Y., photographed the scene on his HO scale 4 x 8-foot Pennsy layout. He anchored the Broadway Limited engine’s coal train with three stationary locomotives and used a 15-second exposure to capture the motion blur of the wheels.