Home / How To / Model Train Layouts / A freight train at night, a diesel at the turntable, a steamer in the shop, and other model railroad photos 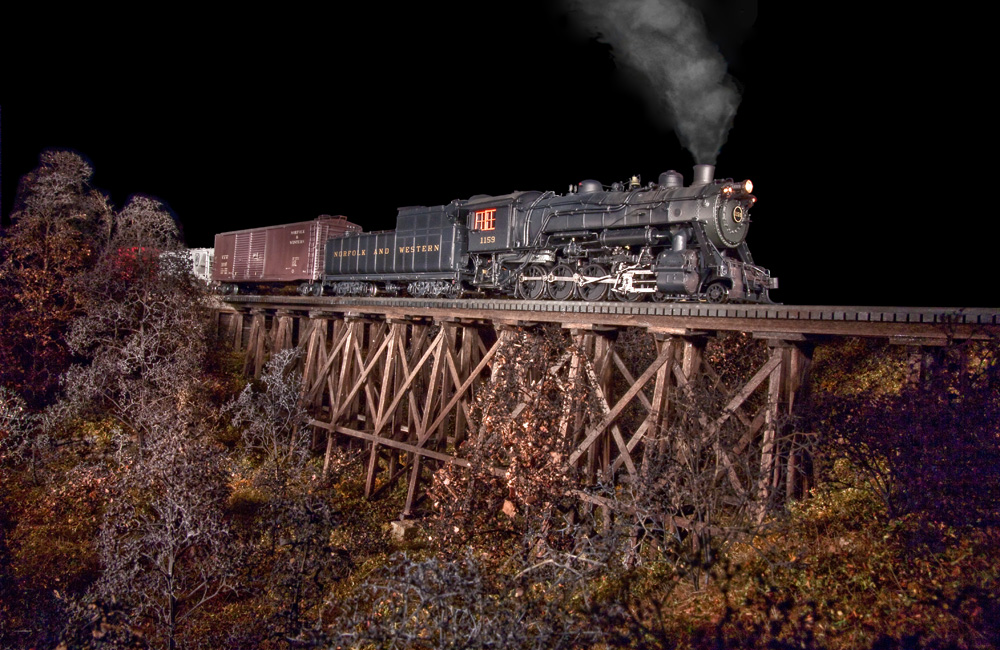 In a shot inspired by the nighttime photography of O. Winston Link, a Norfolk & Western class M2C locomotive is seen pulling a short local through the darkened Virginia countryside on an autumn night. Gary Hoover of Florissant, Mo., captured the image by using a one-minute exposure time and “painting” the scene with a small, mobile light source. The engine is a Precision Scale brass import Gary weathered and equipped with DCC.

New York Central no. 6228, a Baldwin RS-12, eases onto the turntable so it can enter the Clinton Street roundhouse for some much-needed maintenance. Russ Weis of Louisville, Ky., photographed the locomotive on his HO scale NYC-themed railroad. The engine is a Bowser chassis equipped with a Stewart Hobbies shell that was upgraded by Russ’ friend Steve Lasher, a retired Rock Island engineer.

A Denver & Rio Grande Western K-59 Mikado approaches the trestle over Santa Cruz Gulch with a mixed freight while a passenger train tops off its tender at the water tank below. Tim Schreiner of Roland, Okla., shot the photo on the Faith Canyon Route, his HO/HOn3 D&RGW layout.

A pair of Alco RSD-4s leading a long westbound coal drag emerge from a tunnel and pass under a signal bridge indicating a clear signal for the eastbound main. Vincent Lee shot the action on the HO scale layout belonging to the West Island Model RR Club of Hicksville, N.Y. Vincent detailed the Atlas locomotives and equipped them with DCC and sound. Club member Vic Grappone built the layout’s signal system and John Regler did the scenery.

The workers at Pioneer Paving are busy loading a dump truck right now, so the gravel hopper spotted on the unloading trestle will have to wait. Jann Mayer of San Diego, Calif., staged and shot the photo on his HO scale shelf layout, which was inspired by the Northwestern Pacific RR in northern California. The trestle is scratchbuilt; the hopper is a Con-Cor model.

4-6-0 Baldwin steam locomotive no. 377 pulls The Cannonball into Hooterville on the early evening run from Pixley. Burt Zastera’s freelanced HO scale layout, the Nowhere Particular RR, is a tribute to the classic TV sitcoms The Beverly Hillbillies, Petticoat Junction, and Green Acres. The Ten-Wheeler and combine are both Bachmann models.

Canadian National no. 35, a General Electric 70-ton switcher, backs in to pick up a boxcar from the fertilizer plant. James Hilton of Corwen, Wales, U.K., photographed the action on Kinross, his cameo-style HO scale layout, inspired by Kinross on the CN’s Prince Edward Island network. The entire model railroad is just 10” x 40”. The locomotive is a heavily modified Bachmann model and the trees are hand-twisted wire with poly fiber foliage.

With the help of the shop crew, this aging 4-4-0 American steam locomotive will see a few more productive years on the railroad. Joel Moore of Narvon, Pa., scratchbuilt the engine shop from stripwood and detailed the AHM Rivarossi steamer with Cal-Scale parts. He also shot the photo on his HO scale layout using natural light.