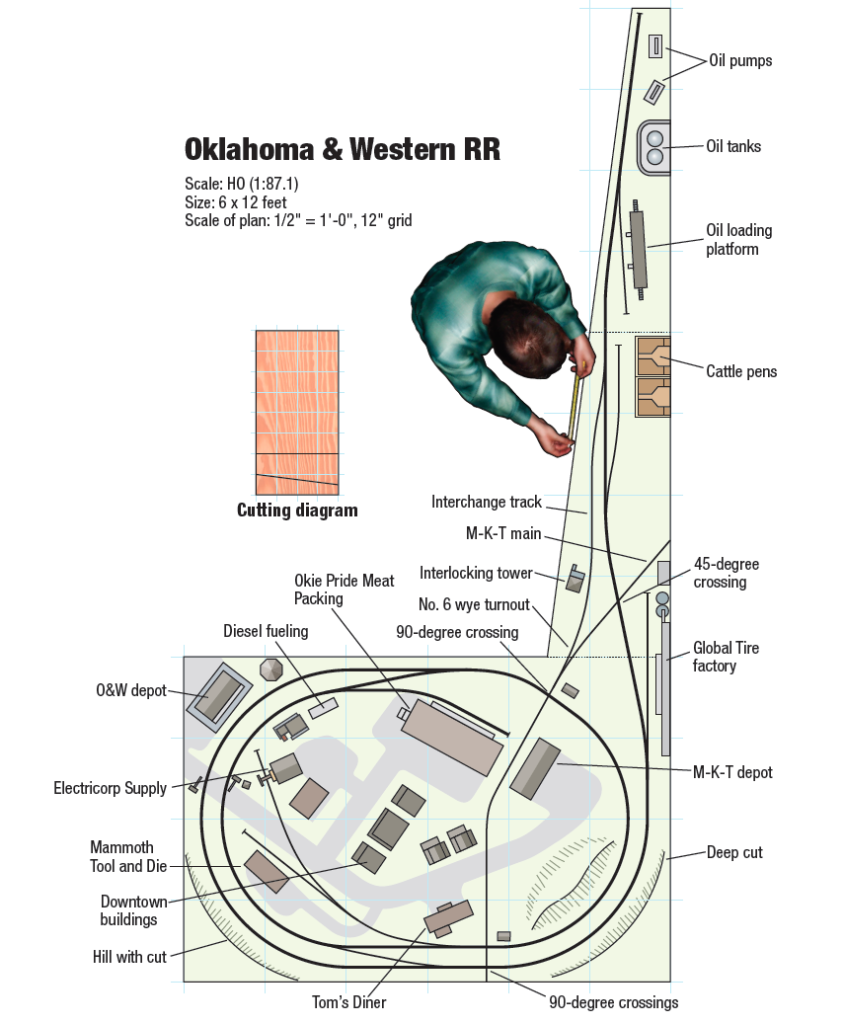 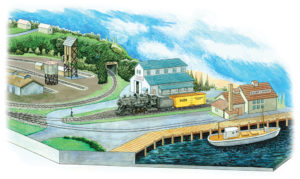 HO scale model railroads are often small layouts based on 4 x 8-foot sheets of plywood, for obvious reasons. A flat tabletop is a lot easier to build than L-girder benchwork, and almost any home has room for a 4 x 8 table at one side of a bedroom or basement.

Great things have been done on a single sheet of plywood. However, that shape does impose certain limitations. In HO scale, a plywood sheet restricts you to a few variations on an oval or figure eight. And being able to see your entire layout from a single vantage point limits the realism.

But what happens if we cut that plywood into three pieces and reassemble them in a different shape? This track plan uses a few cuts of a saber saw to open up the possibilities locked in a 4 x 8, while keeping the benefits of compact size. Supporting and splicing together the odd shapes resulting from our jigsaw-puzzle technique will require a bit more involved benchwork than a 4 x 8 table does, but it pays off in much greater visual and operating interest.

The Oklahoma & Western Railroad
This track plan uses one straight and one diagonal cut to add a branch line and an interchange track to an HO scale oval. The double-ended track allows for runaround operations needed to switch the three industrial sidings inside the loop, but it’s the eight-foot-long, tapered peninsula that breaks this layout out of the box. 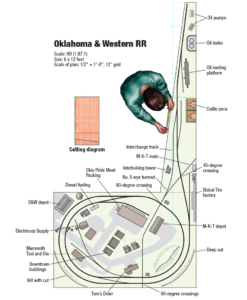 Wrapping the lead for the branch line around the outside of the loop maximizes its length, while a variety of facing-point and trailing-point turnouts makes switching challenging. Note that the second track in front of the O&W depot can’t be used as a passing track for the loop without a backing maneuver.

The track that crosses the main and the branch represents the Missouri-Kansas-Texas Railway, a real railroad with which the fictional O&W interchanges. This doesn’t just add visual interest, but also allows the O&W to ship any kind of car on and off the layout via the interchange track. Cars due for delivery to the O&W can be staged in front of the M-K-T depot before the operating session and shifted to the interchange for pickup by a road switcher. Likewise, cars from online industries slated for destinations off the layout can be dropped off on the interchange track to be picked up by the Katy.

The locale is the foothills of western Oklahoma, represented on the model railroad by hills on two corners of the layout. The deep cut on the larger hill also serves to visually break up the main line, disguising the oval.

The major industries and resources of the region – cattle, meatpacking, tire manufacturing, and oil – are represented, helping to reinforce the layout’s sense of place. A couple smaller industrial spurs branching off the main loop add options.

Setting the railroad in the transition era of steam to diesel-electric power means that either early diesels or oil-fired steam locomotives would be at home on this layout. A Vanderbilt-tender 2-8-2 Mikado or an F unit could handle motive power duties on the O&W. For the M-K-T, an Alco RS-3 would be a good choice.

If you wanted to expand this layout later, the line at the end of the peninsula could be connected to a staging yard, or maybe a city such as Tulsa, Okla. You could also extend the Katy track into a new area.