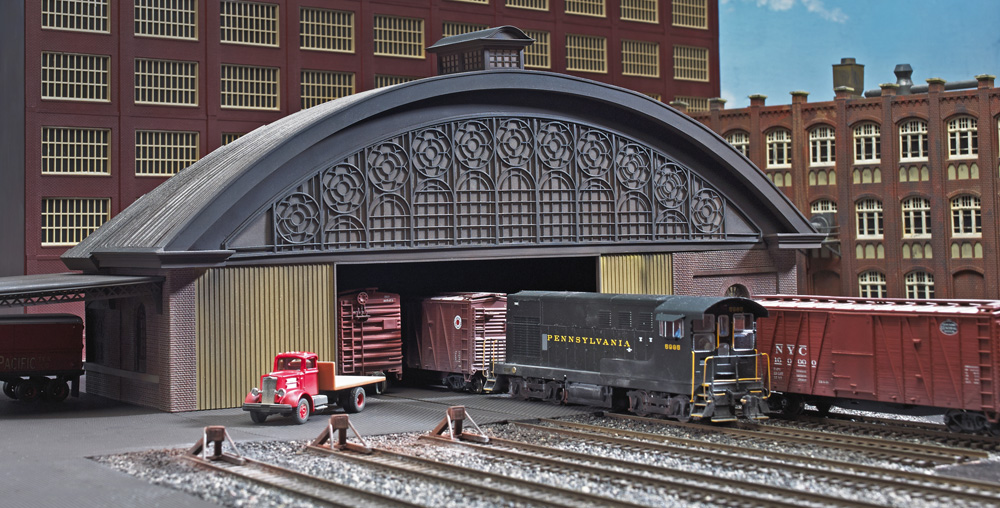 When I first moved to Wisconsin to start working for Model Railroader, my family and I were in a two-bedroom apartment. I had built a freelanced Pennsylvania RR layout in my apartment back in Pennsylvania that filled a 7 x 11-foot section of our long apartment living room. It was basically a donut, with a section built as a shadow box facing the rest of the room.

When we moved out here, the entertainment center had to go up against the wall, but I still had an 8-foot-long by 16-inch deep area I could build something in. While looking around Facebook, I came across a group called Old Images of Philadelphia. Some of the images showed railroad scenes, so I joined the group. Some of the railroad scenes were photos shared from PhillyHistory.org, so I went there and started looking around, and that’s where I discovered Washington Avenue.

Washington Avenue was notorious for its rough surface, even by decaying Northeastern big city standards. Even into the 1980s, there were four tracks down the middle of it, and the roadway on either side of those tracks seemed to be an afterthought. Tracks branched off into buildings left and right along the road, and into the 1970s, streetcar tracks crossed at semiregular intervals.

Photos taken by the Philadelphia Water Department make up the bulk of PhillyHistory.org’s photo collection. The photos were taken to document the condition of sewers and the roadways that drained into them, as well as the buildings that were served by the water department. It’s a goldmine of urban landscapes. Most of the photos were taken in the 1910s to 1920s, but there are photos into the early 1960s to document changes made to the roads and the infrastructure buried beneath them.

One of the most striking photos I found was the trainshed of the Philadelphia, Wilmington & Baltimore Railroad on the corner of South Broad Street and Washington Avenue. The PW&B eventually became a part of the Pennsy, and its South Broad station was the city’s gateway to the south until PRR built its Broad Street Station at the end of the 19th century. When Broad Street opened, the station on South Broad became a freight house. There must have been lots of freight traffic because the PW&B already had a freight house next to its passenger station.

The huge arched window at the end of the trainshed inspired me to model it (see the September 2015 issue of Model Railroader). I knew I couldn’t model the whole building, so I aimed for a flat that could go against an opening in the entertainment center, which would allow me to spot cars inside the trainshed. Because there was only a hole in the left end of the entertainment center at the time, I built a mirror image of the trainshed, and subsequently, the whole layout is a mirror image of the prototype.

In addition to the photos on PhillyHistory.org, I found a cache of Sanborn Fire Insurance maps at Penn State University Libraries’ digital collection at libraries.psu.edu/about/collections/digital-map-drawer. There are maps from around the state. If you’ve never looked at a Sanborn map, they give an accurate representation of the location of railroad tracks and the buildings along them. This helped me fill in the rest of the layout with plausible industries. Of course, I didn’t have room for all of the businesses along the branch, so I chose industries that would create interesting scenes and allow for a good variety of freight cars.

In addition to the freight house, I have planned a warehouse that bordered one edge of the freight house yard. I also have a two-track team track and a furniture factory complex. These industries are along the back of the layout, behind the two-track main line, which was what I had room for with my 16-inch depth. The main line angles from in front of the edge of the entertainment center at the freight house end, to centered in a hole I cut in the center of the opposite end after we moved out of our apartment. The only industry to the front of the layout is a coal and oil dealer.

Other than the freight house, none of the models is an exact replica of the prototype. The differences in space available, as well as the lack of detailed information, made this the path of less (if not least) resistance.

Off of each end is a 4-foot-long staging cassette. On the freight house end, the cassette bolts to the layout, but on the opposite end, the cassette is hinged so it can drop down. Three drawers are built into the grid benchwork that sits on the surface of the entertainment center. The layout surface is two layers of 2-inch extruded-foam insulation board. This brings the surface of the layout up to the bottom of the holes in the ends of the entertainment center.

The track is all laid, and an NCE PowerCab system supplies the power. At present, this system is temporarily attached so I can swap in a DC power pack for at-home product testing during the pandemic. The track is Atlas code 83 I salvaged from my former layout, and the turnout frogs are powered by Tam Valley Depot Hex Frog Juicers. I have a switch to isolate them when the layout is DC powered.

The next big project is creating a coved backdrop. I’m halfway through creating the backdrop form .020-inch styrene. When it’s finished, I plan to use black-and-white photos from PhillyHistory.org to finish the street scenes where the cross streets recede into the backdrop. The skies will be gray. No matter what you might have heard, it’s not always sunny in Philadelphia!