Home / How To / Build a Model Railroad / Tracklaying: adhesives, nails, or spikes?

Track and roadbed can be fastened to foam insulation board with construction adhesives made for use with the foamboard. Apply a ¼” bead along the center line, use a putty knife to spread it in a thin layer, and press the roadbed down into place. Add weights to hold it while the adhesive sets. Then the next day, the same procedure can be used to secure the track to the roadbed.
Good tracklaying has a direct bearing on your railroad’s performance, so take the time to do a good job and it’ll pay off in a smooth-operating layout.

Roadbed is used under model track to simulate the layer of crushed rock that supports prototype track. Shaped cork or flexible plastic foam roadbed bends easily so it works well under curves.

A track center line is needed to install the roadbed. Cork roadbed comes in two pieces so the tapered edges go to the outside. Apply a bead of construction adhesive along the center line, spread it evenly with a putty knife, and then press each half of the cork roadbed into the adhesive as you follow the center line.

If the layout is made of foam insulation board, we use Locktite’s PL300 Foam Board Construction Adhesive (www.loctiteproducts.com), or Liquid Nails Project & Foamboard Adhesive no. LN-604 (www.liquidnails.com). This method requires weighting or pinning the roadbed down overnight to allow the adhesive to set.

Woodland Scenics makes Track-Bed, a foam plastic roadbed for N, HO, and O scales, and Foam Tack Glue and Foam Nails for use in installing the Track-Bed.

On a wood surface, flexible roadbed can be nailed down with ½” flat head wire nails instead of using adhesive.
After the cork roadbed is secure, I use a Stanley Surform block plane to smooth and level the top surface and gently round off the top corners for ballasting. 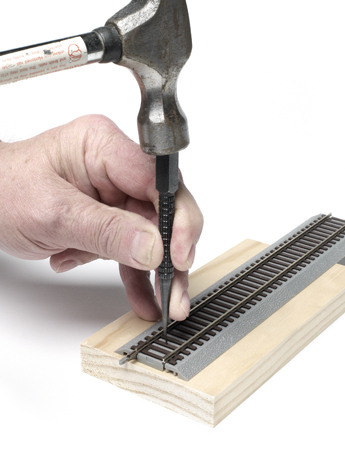 A nailset allows you to drive thin nails through the holes in the hard plastic roadbed without damaging the rails.
Laying the track is mostly a matter of starting at one point and then carefully fitting the rail joints into the joiners as you work your way around the track plan. I usually start at a complicated junction so I can carefully align all of its components. Then I sight along the rails to make sure everything is straight.

Some brands of sectional track have rigid, molded plastic sectional roadbed with a rock ballast texture. Most of these sectional pieces include small mounting holes so the roadbed can be nailed to the benchtop. Others have drill starting points underneath so you can drill the holes as needed.

Atlas sells no. 2540 thin black track nails, and Peco offers no. SL-14 pins that are perfect for this job. Slip the rail joiners together, and drive the nails just tight enough to secure the rigid, plastic roadbed without distorting its shape. A nail set is handy for this job so you don’t hit and damage the rails or roadbed.

The cast sectional roadbed can also be secured with construction adhesive. Just spread the adhesive a little wider so the plastic edges are secured. Then add a few nails to hold the roadbed sections down while the adhesive sets.

Construction adhesive can also be used to secure the track. I dry-fit the track components before removing them while I apply a thin layer of adhesive on top of the roadbed. I’m careful to avoid applying adhesive under the switch rod or the points to keep the adhesive from oozing up between the ties where it may produce potential problems with the free motion of the switch points.

Track can also be spiked or nailed down using the small holes molded into the ties for this purpose. Nail holes run along the track center line and may need to be opened up with a small drill. I drive the nails about 4″ to 5″ apart so they’re snug without distorting the ties.

Spike holes are molded close to the rails on both sides. Use a pair of long-nose pliers, or Micro-Mark’s no. 82839 spiking pliers, to insert and drive the spikes. Grip the top half of the spike in the pliers so its offset head faces the rail with the main body of the spike sticking out below. Insert the spike in the hole at a slight angle and press it down until the pliers reach the tie. Release the spike, close the pliers, and use the flat end of the tip to gently press the spike home. 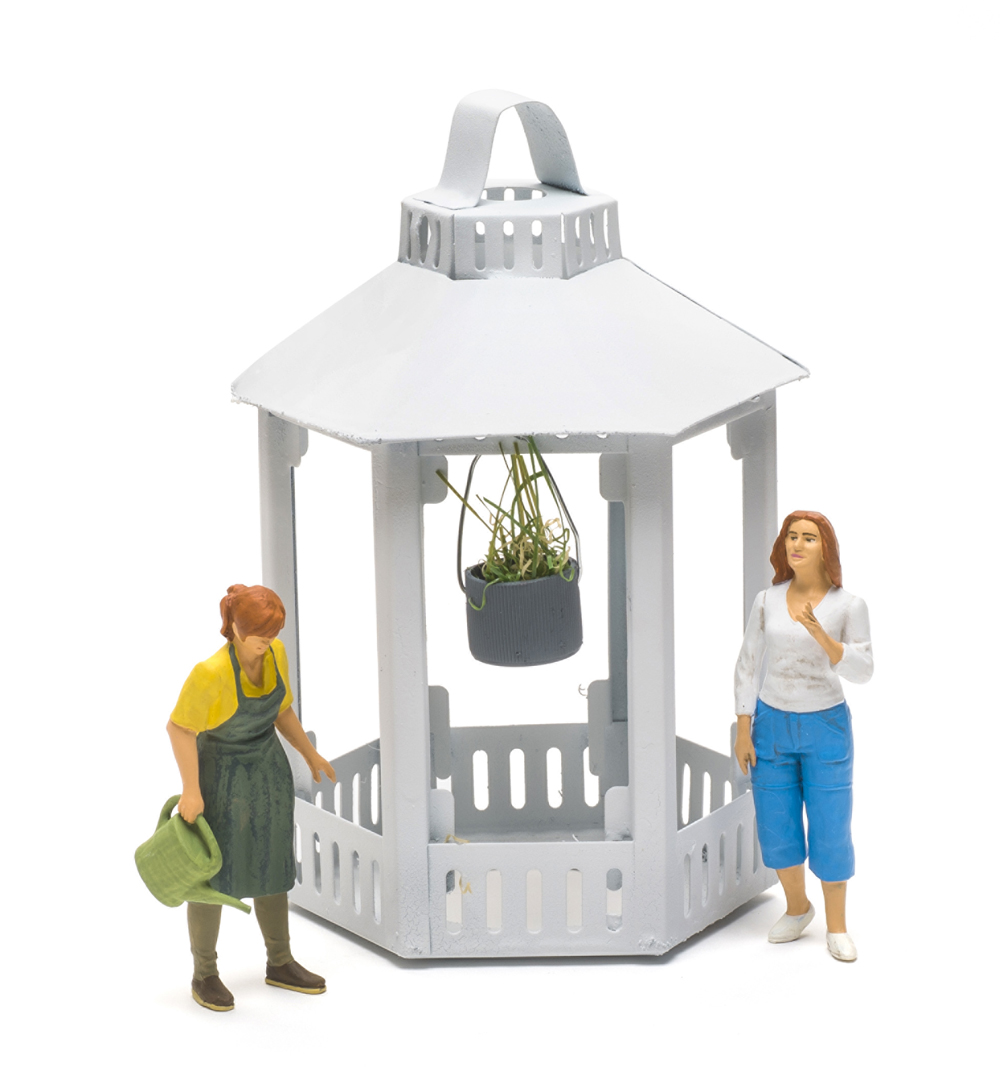