Home / How To / Build a Model Railroad / Sketching with Steve: Big industries for small spaces 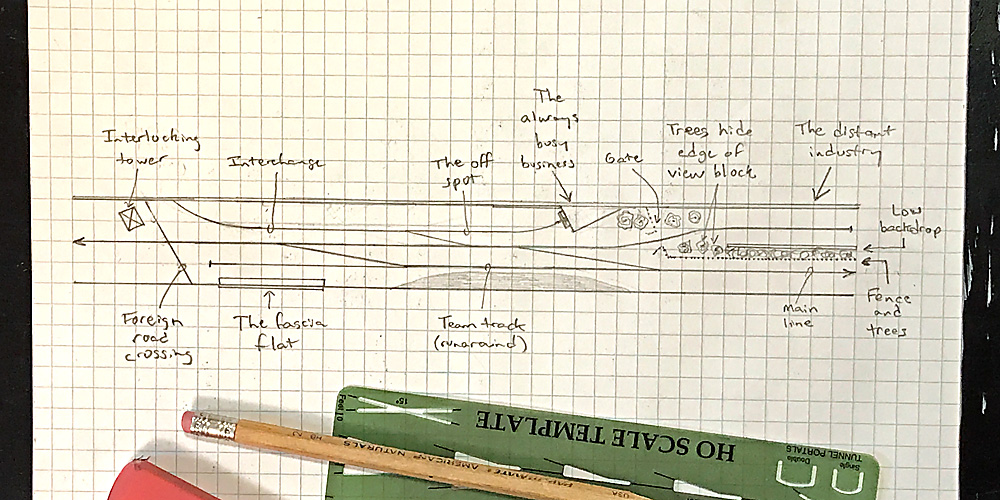 Model railroaders who want to maximize their mainline runs often resort to narrow shelves that hug the walls and zigzag through the middle of the room on long peninsulas. The tradeoff with this kind of design is that the more shelves have to fit into a room, the narrower they have to be. This limits the size of the industries you can fit on the layout, which in turn limits their operational capacity. It’s hard to justify posting a boxcar a day to Mammoth Manufacturing if the factory itself isn’t much bigger than a boxcar.

But there are ways to represent large, busy industries in small, narrow spaces. And I’m not just talking about a backdrop flat.

Consider that structure’s literal opposite, the fascia flat. Instead of placing a structure flat along the backdrop, put it and its spur on the fascia side of the shelf. The unmodeled rest of the building is imagined to exist in the aisle. Extend the fascia upward to protect the back of the flat, or if the space is wide enough, consider building the structure as a cutaway with a partial interior. Another benefit of this technique is it allows photo angles down the track to realistically depict an urban “brick canyon,” with buildings on both sides.

If you don’t want to obstruct view or reach-in lines, a fasica industry need not always include a structure. An industry can be represented by a loading dock, a tank car unloading platform, the fence and ramp of a livestock pen, a between-the-rails hopper unloading grate, or even just a paved car unloading area.

An option that ought to be at every town on your railroad is the team track. Team tracks are where cars are spotted for industries that don’t have their own rail spurs. They’re named for the horse teams that pulled the wagons that used to load and unload the freight cars. All you need is a quiet stretch of track and a paved area alongside for the truck or wagons; a loading ramp is optional. The best thing about a team track is that it’s a “universal industry” – since any non-rail-served industry conceivable can receive or ship from a team track, any kind of freight car can be switched there.

Another universal industry is the interchange. This is where cars are handed off from one railroad to another. No structure is necessary, though an interlocking tower may be called for if the foreign road crosses yours. The sketch shows how an interchange need not actually connect to the foreign road; lead it off into the backdrop toward the crossing track, and the connection is implied. Use trees, a road overpass, or the interlocking tower to conceal where the track meets the backdrop. The other railroad won’t be able to actually pick up or drop off cars, so you’ll have to fiddle cars on and off the layout by hand. Depending on how busy you decide the interchange is, you can do this between operating sessions or during a session.

If you have room for a track but not enough room for a car spot, consider what I call the always busy business. On my sketch above this is represented by a track leading into a building that’s already occupied by a boxcar sticking partway out the door. Since there’s not enough room to spot a car inside the building, posing the end of a car as if it were occupying the unloading bay gives us a justification. Cars consigned to this industry would instead be spotted at an “off spot,” an available location on a nearby spur, team track, or passing track.

This last trick is a great way for a small layout to represent a large industry like a stone quarry, chemical plant, oil refinery, or steel mill without having to devote much real estate at all. The spur goes through a chain-link gate, then enters trees that conceal its unmodeled destination. The industry could be represented with a photo on the backdrop or simply identified with a sign on the fence. A low view block covered with clump foliage representing a tree line hides the end of the spur from view. Simply shove the cars into the hidden track, wait a while to represent in-plant switching time, then back out. If you have room for two hidden tracks, you can double operational interest by using one for loads and another for empties. 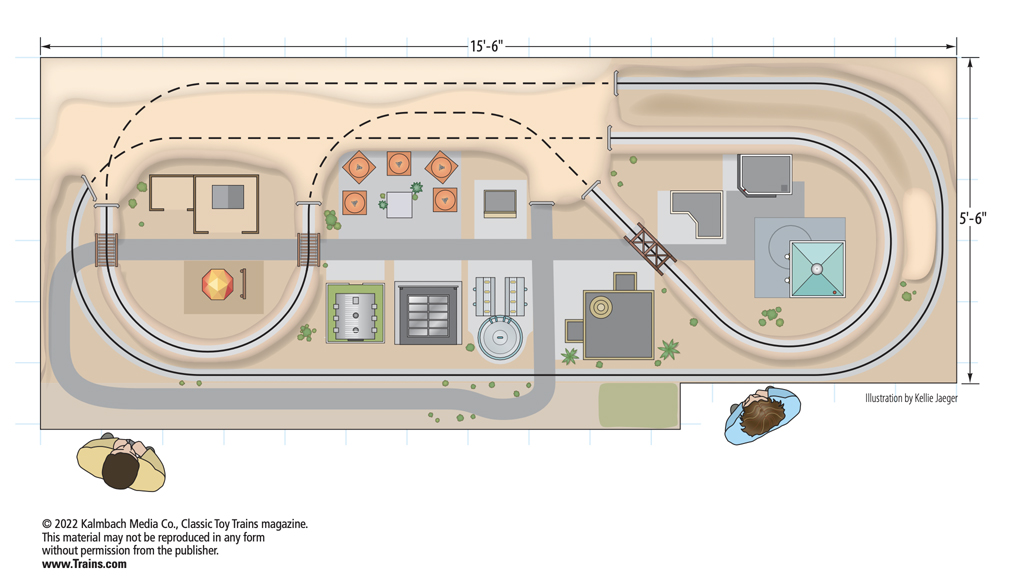