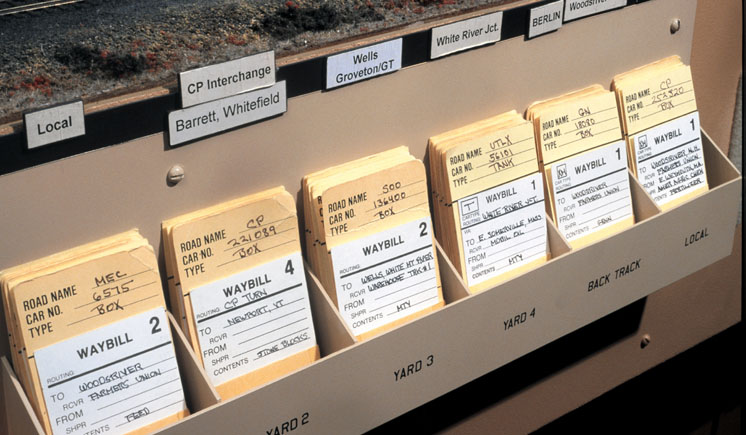 To apply the car-card-and-waybill freight-car routing system I described in part 1 takes more than just the two basic forms. The first form is the car card identifying each freight car with a pocket to hold the other form, a 4-step waybill. The pocket and waybill are sized so that only one of the waybill’s steps is visible at a time, and that step shows the car’s current destination.

To organize these card-and-waybill combinations, you’ll need file boxes conveniently located at stations and yards around your layout.

File boxes. The basic file box for an intermediate station typically has three pockets labeled Set out, Hold, and Pick up. A train crew arriving at the station with a local freight picks up cars identified by car cards in the Pick up box and adds those cards to the pack they carry with their train. They set out cars from their train with waybills for industries and other car spots at this station, and leave the cards for those cars in the Set out box. If there are any cards in the Hold box, they either leave those cars where they stand or replace them if they have to be moved to allow access to other cars – the cards stay in place, too.

Between operating sessions, you, the layout owner, walk around the layout and advance cards and waybills left in the station files. Pull the cards from the Hold box, turn their waybills so the next step (destination) is showing, and place them in the Pick up box. These will be the cars that the local freights pick up in the next session. Then pull the cards from the Set out box and place them in the Hold box. These cars won’t move in the next session, a delay that simulates the time allowed for loading and unloading the cars. You also have the option to advance cards directly from Set out to Pick up to represent expedited handling.

Yard files. In yards, the simple ­3-pocket file box is inadequate. To keep card files organized, you’ll need a file pocket for each track. I recommend that these include the main track and any passing siding where cars or trains may be left, and also one for the drill track or switch lead so the yard engineer doesn’t have to work with a handful of cards.

The pockets are identified by track number or name, as shown in the photo above from Paul Dolkos’ old Boston & Maine layout. They can also be labeled by the “block” or destination group held on that track. The photo shows how Paul did that, using magnetic labels above the pockets so the labels could be moved to reflect changing situations in the yard. Another way is with a taller label card that can be put in the back of the pocket.

As cars arriving in the yard are classified – switched into destination blocks – the car cards are added to the front of the pocket for the appropriate track. When a train is ready to depart, the blocks for that train are assembled on one track, and the cards are stacked together and given to the outbound train crew.

The layout owner doesn’t have to ­update any card files or waybills for a terminal freight yard unless there are ­associated industry, freight house, or ­engine terminal supply tracks, just like industries at intermediate stations. It’s the yardmaster’s job to keep the files current during the operating session.

Staging yards. Staging yards are ­another matter. These also need a file box for each track. Trains waiting to ­depart are indicated by card packs in the file boxes facing out.

When a train ends its run in staging, the usual convention is to place the card pack in the file box facing in, showing that the track is occupied but that the train won’t run again in the current session. Between sessions, the layout owner pulls the card pack for each train and advances all waybills to the next step.

The train consists may be left as they stand, but that can make extra and not necessarily realistic work for yards handling incoming trains. Most layout owners prefer to re-block the trains to reflect the new destinations shown on the waybills. If you want to add or remove cars from the staged trains, or make changes in car cycles, this is the opportunity to replace some portion of the waybills.

Train makeup. The destinations indicated on the waybills establish a reason for organizing cars into trains. That’s one of the main reasons for using any car-routing system in the first place, but there are so many possibilities to consider­ that I’ll have to take up that topic in part 3.

Andy Sperandeo (1945-2015) was a long-time staff member and editor of Model Railroader.