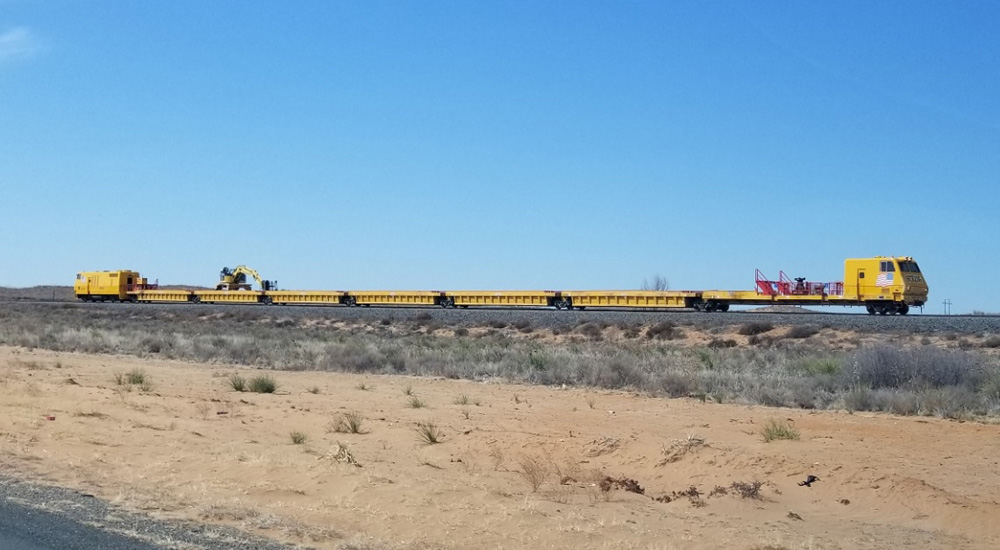 Q: I saw some kind work train on my local BNSF line today that I’ve never seen before and I was curious as to what it was. The thing that surprised me the most is it looks like double stack well cars were converted to MOW duty.  Is that the case? – James Cox, Portales, N.M.

A: That’s a Herzog Multi-Purpose Machine, or MPM. You can read about it on Herzog’s website: herzog.com/innovation/on-track-maintenance-material-distribution-and-pick-up-machine/ It’s not made of repurposed intermodal well cars, but rather is purpose-built. The walls of the gondolas that make up the center section of the machine are reinforced so the crane seen near the back can move between cars, picking materials out of the gons and placing them along the track. Among its many uses are distributing new ties for a tie-refurbishment project, picking up old ties afterward, or picking up brush and debris cleared from the track after a storm. It’s a cool-looking machine that would make an interesting maintenance-of-way movement on a model railroad. We’ve seen a custom-made N scale version for sale on Etsy, but as far as we could find no hobby manufacturer offers them. Perhaps there’s a niche there.

Q: Does running trains on a model railroad have the same polishing effect on the rails as full-size trains? Given that our model trains have metal wheels like the prototype, I was wondering if this would be a more enjoyable way of keeping the mainline tracks clean. – David Bellamy, Caledon, Ont.

A: Not really. While it may have a nominal effect of picking up dust and grime from the rails, it does so at the expense of accumulating that gunk on the wheels themselves. I’m afraid there’s no way to entirely avoid having to clean both rails and wheels regularly, other than switching over to “dead rail” – battery power with radio control.

Q: I want to convert my existing direct-current layout to Digital Command Control (DCC). I also need to convert my DC locomotives (virtually all of them 15-20 years old, and two of them even older) to work on the DCC layout. I need very basic beginner instructions. Suggestions? – Robert Bowman, Lebanon, Pa.

A: Digital Command Control has been around for more than 25 years, so comparatively speaking, your locomotives aren’t all that old. There’s a chance that at least some of them might be DCC-ready, with sockets a DCC decoder can be plugged into. Other locomotives might have printed-circuit lighting boards that can be lifted out and replaced with decoders designed for that purpose; check the websites of various decoder manufacturers to see if they make such a drop-in (also called “board-replacement”) decoder solution. If you strike out on both those solutions, don’t fret – if you’re confident in your soldering skills, the hardest part of hardwiring a decoder harness into an old locomotive is finding a place under the shell to put the decoder.

We’ve published a number of articles over the years in our “DCC Corner” column detailing a variety of decoder installations, and there are plenty of installation how-to’s online, as well. You might even luck out and find one specific to your model of locomotive. If you aren’t confident in your electronics skills, there are entrepreneurs who will perform decoder installations for a modest fee. Ask at your local hobby store or train club.

I saw David Bellamy’s question about how to measure the main line of his model railroad in the November 2020 “Ask MR.” Measuring with a tape measure can be hard, especially with curves, tunnels, and bridges to deal with. What I’ve done is take a mix of cars and put them together in different arrangements until they come out to a “train” exactly 36″ long (or some similar round number). Then start at a given spot, like a station or crossing, and go around the main line pushing the train ahead one length each time, counting how many lengths it takes to get to the end of the line (or back where you started, if it’s a continuous run). Multiply the number of “lengths” by 36″, and you know how long it is. – Bill Stixrud, Cottage Grove, Minn.

Do you have a question about model railroading you’d like to see answered in Ask MR? Send it to associate editor Steven Otte at AskMR@MRmag.com 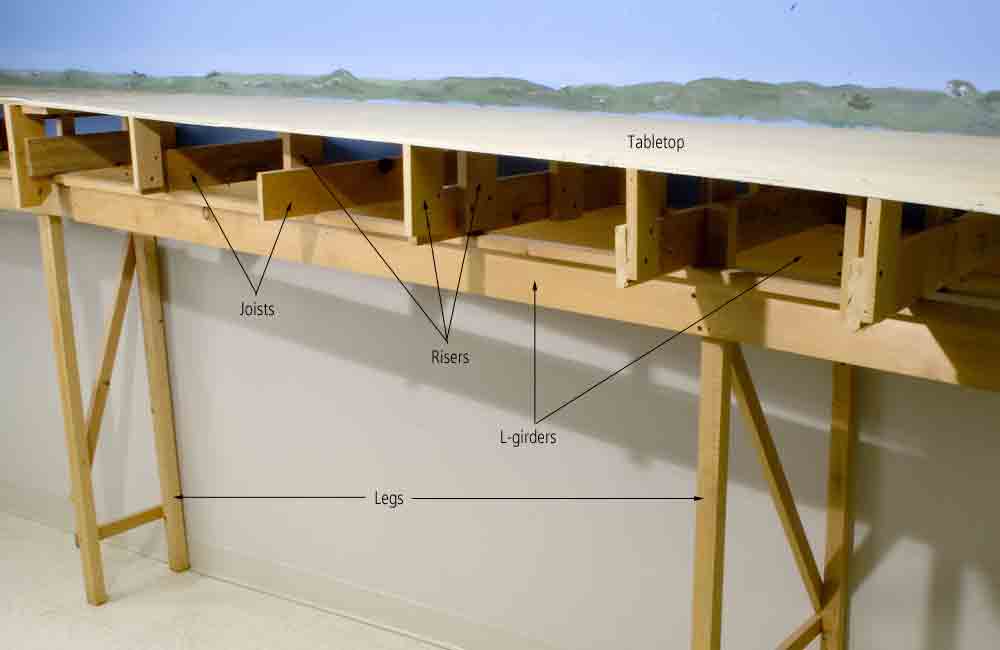 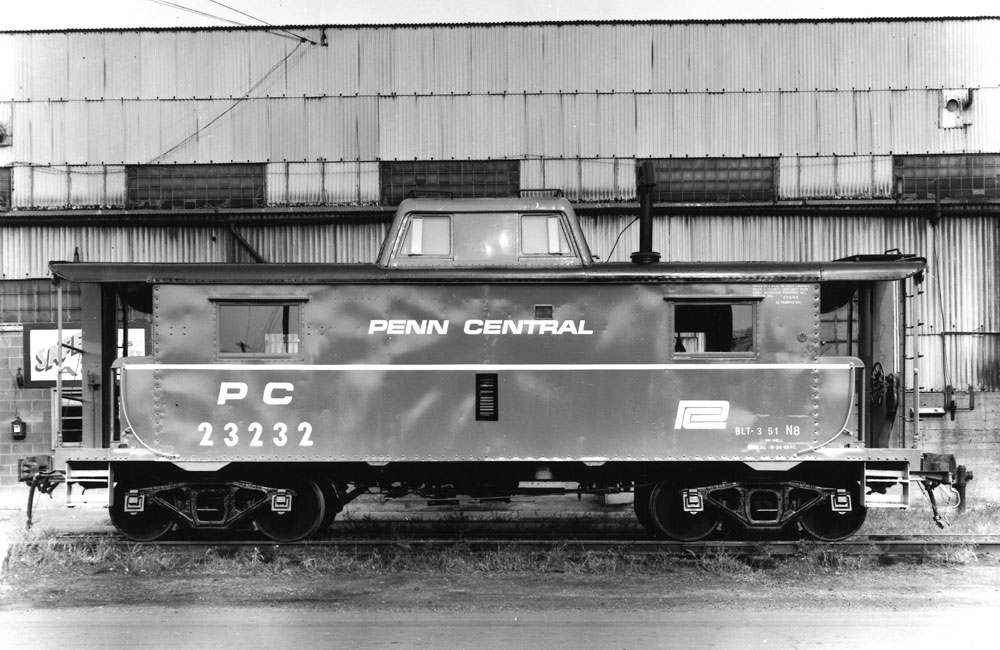 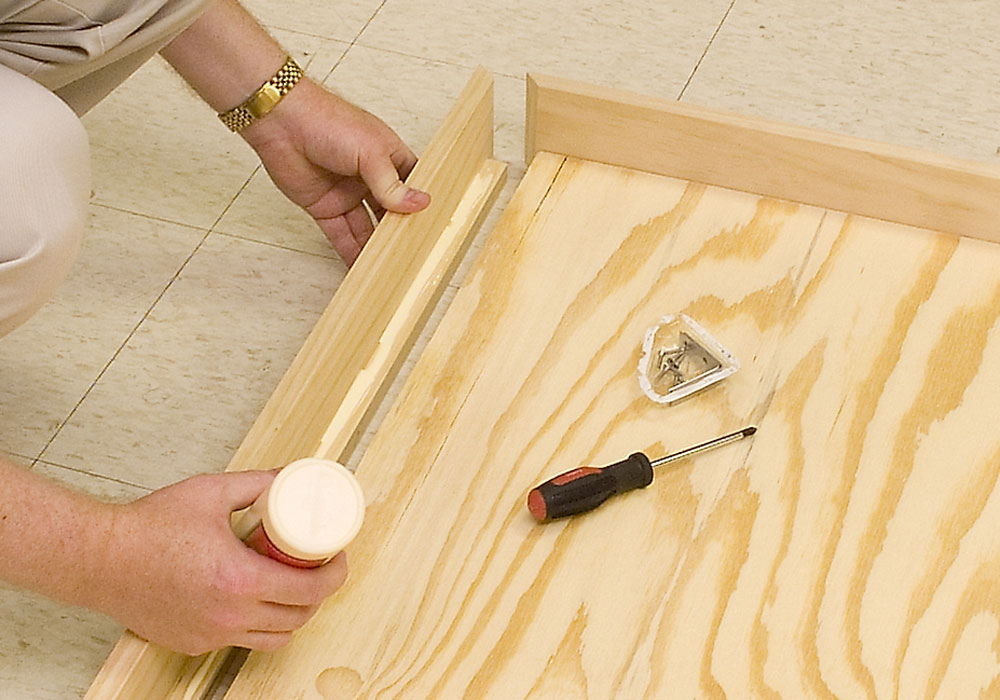