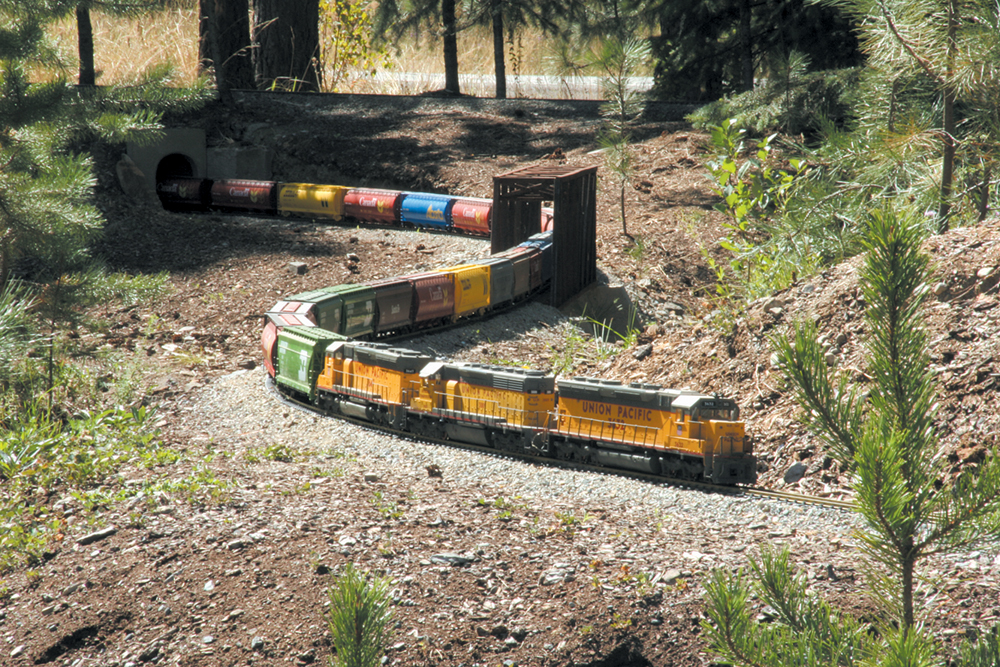 A USA Trains Hudson takes a long string of Aristo-Craft heavyweight cars across the high steel trestle, seen here at its highest point, perhaps 12 feet tall. The scratch-built bridge has been in place for many years. The 56-foot-long structure was created based on a single photo. Photo by Marc Horovitz

The passenger trains crosses the Crooked River Bridge. This structure is modeled after one in Oregon. Supports are cast concrete. Douglas fir and ponderosa pine trees, collected as seedlings, will eventually create a small forest along the banks of the river. Photo by Marc Horovitz

Two freights meet near the north end of the line. Locomotives are a mix of scratch-built (by Grant Minor), USA Trains, and Aristo-Craft. Photo by Marc Horovitz

Grant Minor, a friend of and collaborator with the author, heavily rebuilt these Lionel GP20s. The pilots and almost all of the roof details were scratch-built. Photo by Marc Horovitz

USA Trains and Aristo-Craft diesels cross a model of the old Spokane high steel trestle. The third engine, a U30C, was built by Grant Minor. The bridge has been in place for many years. In the background is the second loop. Photo by Marc Horovitz

The steel truss bridge spans a deep gully. It was assembled entirely with screws and nuts on a purpose-built table. Photo by Marc Horovitz

My garden railroad, the Snake River Railroad, is named after my interest in the Union Pacific. This has been my favorite railroad ever since I saw the Big Boy.

The 200 by 300-foot railroad is shaped like a mirror image of Idaho, because of large Ponderosa pines in the backyard. There are two separate loops. The first, around 550-feet long, was operational first. The second750 feet were added about 12 years later. It is now connected to the first loop. There are approximately 300-feet of storage tracks.

Trains on the Snake River Railroad are mostly Aristo-Craft and USA Trains, with additional scratch-built rolling stock. Engines are primarily USA Trains GP-38s fitted with Northwest Short Line’s replacement wheels. I have three Aristo-Craft SD-45s that I’ve fitted with USA Trains motor blocks. I also run a USA Trains’ Hudson, which I liked the instant I saw it. It pulled 77 cars up a steep grade (a section of track that no longer exists). The Hudson is the most impressive and dependable engine I’ve ever had.

Trains are powered by a pair of Crest power supplies with 10-amp controllers that provide 24 volts. If you keep the needle of the ammeter away from the 10-amp mark, everything works fine. I feed power to the track every 30 feet or so using 1,500 feet of 12-2 outdoor lighting wire.

I use prototypically wide, sweeping curves, which are necessary for running long trains with body-mounted Kadee #820 couplers, closely coupled in a prototypical manner. Over time, I discovered that truck-mounted couplers will not work. With trains of 50 to 60 cars, if the locomotives hiccup just once, there will be a derailment. Cars with body-mounted couplers won’t derail as easily. For the most part, trains run without problems, but problems do mysteriously happen when I’m not looking.

Now that the railroad is nearly complete, the only real problem is maintenance, ballasting, constant track cleaning, weeding, and more ballasting. With the exception of time, frost heave is the greatest force working against the railroad. But that’s railroading!