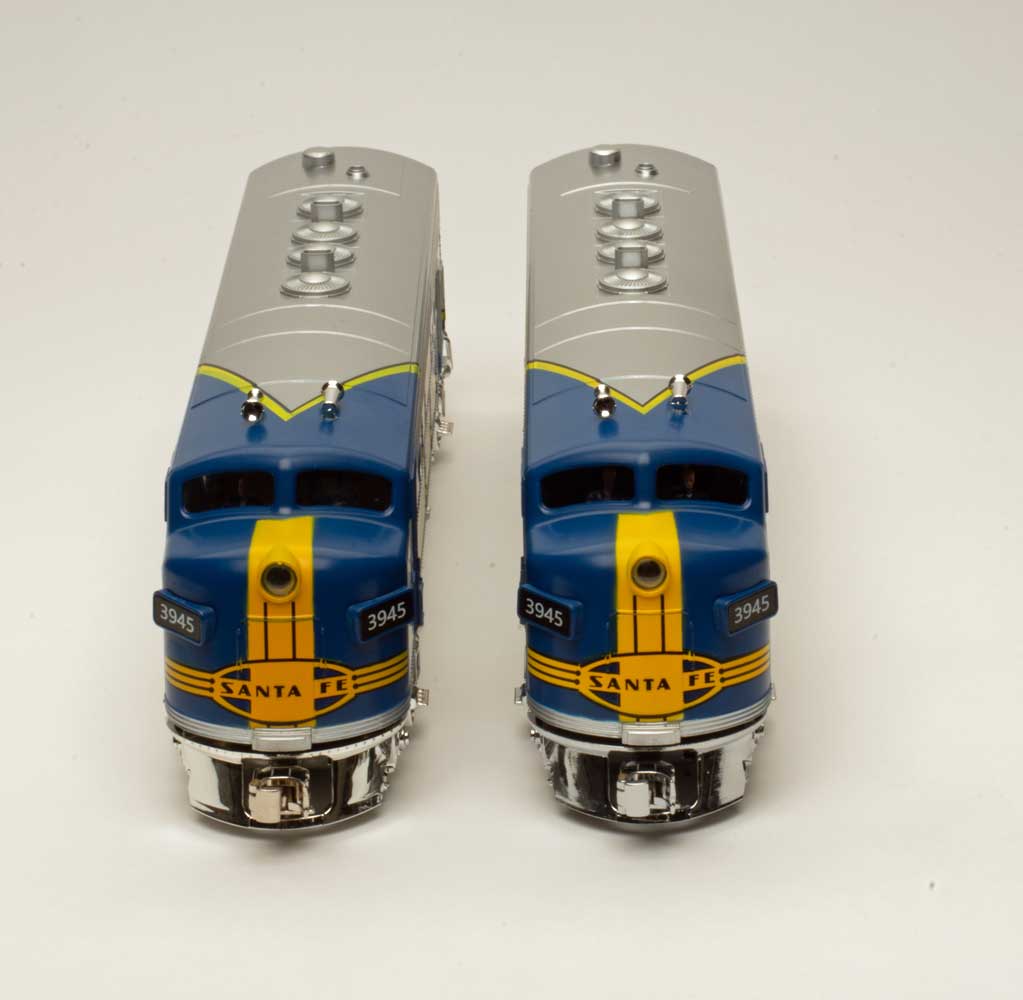 Menards Santa Fe diesel program launched a little more than a year ago with its first beta test. The company has released several more iterations of its F units, which it markets as “Santa Fe Diesel Locomotive,” soliciting customer feedback. The latest iteration, beta 4.0, is an A-A set in Santa Fe’s “bluebonnet” paint scheme from the early 1970s.

The pair consists of one powered and one unpowered unit. Both feature figures in the cab, operating headlights, lighted numberboards, diesel sounds, horn, bell, and crew talk.

The last three items are activated by the handheld radio-frequency remote that is included to control the engines. Not included are three AAA batteries for the remote.

A disclaimer: This is not a review. We are treating this model as a test shot with the assumption Menards is soliciting feedback to improve it for a future production run.

You can get the information on how the units are operated from the original release. As the company wants feedback I found the email I sent to Menards about the first version. I’ll go through it point by point to give an update on what’s been changed.

After running the beta 4.0 locomotives, I had just a few nits left to pick. From what I discovered on the internet, one of them afflicted at least some of the unpowered units of this test run. Upon power-up, I heard a “pop” then saw smoke coming from under its shell. It sounded like a capacitor giving up the ghost.

I took off the shell and sure enough, the electrolytic capacitor for the lights had let go. Expecting to find it miswired (as I have done myself in the past to similar effect), it was not. The negative lead was indeed connected to ground and the positive to track power. It’s possible the run of capacitors was mis-marked; that’s not unheard of in the electronics world.

At any rate, the bad capacitor wasn’t fatal. I determined it’s only there to keep the lights on in case of dirty or poorly conducting track. I was still able to run the unpowered unit with lights.

I have not tried to replace to capacitor but if I do I’ll update this article. It’s an easy fix if you have the part and can solder. I’d recommend replacing it with a polarized electrolytic of the same value; it’s function is to basically act as a battery or reservoir for power. A non-electrolytic capacitor will not do that.

The only other issue I had with the unpowered unit was the inner axles produced an audible intermittent squeaking. A plastic-compatible lubricant would likely help.

The other things I passed along to Menards were:

The dual-motor powered unit functioned flawlessly and pulled a 7-car train with no issues. As mentioned earlier, it stopped and started smoothly and I suspect could have handled several more cars as it’s equipped with traction tires.

Another little improvement was the painting of the figures. They were much more neatly done than in the first version.

The price for the set was $224.71. Menards also recently released as a beta test an unpowered A unit in the standard Santa Fe red warbonnet scheme.

Menards has come a long way with its locomotives, and kudos to them for listening to customers to make improvements. Me, and a lot of other people hope to see these in regular production real soon.