Get the details on these models from Chris's Trains and Things 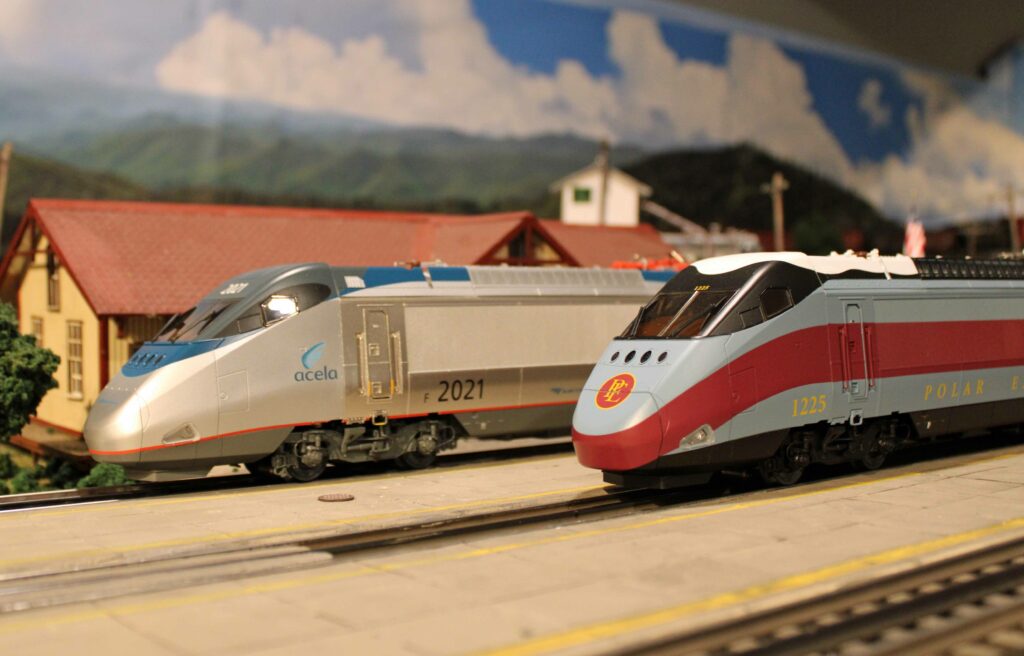 This review of the Lionel Legacy Acela High Speed Train Set is by Chris Montagna of the popular Chris’s Trains and Things channel on YouTube.

One of the more highly-anticipated models from Lionel in its 2021 Volume 1 catalog was the re-release of the Acela High-Speed Train Set. We’ve come to expect Lionel to re-release popular models every 5 to 8 years. However, the Acela hasn’t been in a catalog in more than 15.

The set was originally released in 2005 with a plethora of what would now be Visionline features. Included were operating pantographs, a powered tilt system for the coaches, and automatic door opening and closing. Saying this set was ahead of its time is certainly an understatement. With all these revolutionary features came an equal number of issues for Lionel and service technicians to try to remedy, unfortunately.

The 2021 release dispenses with some of those 2005 features in favor of reliability and service. It has the electronics we’ve come to expect from modern Lionel: Bluetooth, Legacy control, and a better sound set. Gone are the automatic tilt and self-opening doors. Lionel also re-engineered the truck design, which Lionel’s Dave Olsen described during one of his “Demos with Dave” YouTube live streams. The upgrade allows users to change traction tires without having to disassemble the truck, a design flaw of the 2005 model.

Another expectation with new Lionel models is fantasy paint options. Eight schemes were offered in the catalog including a prototypical Amtrak scheme, and concept that never made it onto the national carrier’s locomotives. There were also New Haven, Milwaukee Road, Union Pacific, Pennsylvania, Santa Fe warbonnet, and of course Polar Express liveries. Lack of demand killed all but the two Amtrak paint jobs, Santa Fe, and Polar Express.

Just like the 2005 release, Lionel offers a main set which includes powered locomotives for the head end and the rear of the train, with three coaches. It also offers a three  coach add-on pack which includes a Station Sounds bistro car. The latest release features all LED lighting on the powered units, flicker-free LED lighting in the coaches, manually opening and closing doors, passenger figures, and Kinematic drawbars for close coupling on straights.

Love the Acela? How about a pin?

The trucks have an unbelievable number of add-on parts that seem to perform better than the complicated assembly on the 2005 release. The sound set of the Lionel Legacy Acela sets is also something to highlight – the Amtrak model has a female engineer and dynamic engine sounds. The Polar Express version comes with sounds from the movie including character voices highlighted by Tom Hanks as the conductor. When you add the three-car bonus set you get an even higher level of audio detail including station sounds, passenger announcements, and ambient rail sounds.

The two powered units can be paired as one so you do not need to use the train option to run these correctly. The pantographs function automatically and are in sync. The catenary wire sounds add another layer of realism, even if you don’t have wire strung above your track. The pantographs are also low enough to fit through tunnel portals on my layout without catching. Be sure to carefully measure this before running this set on your layout, though!

As far as paint goes, these models do not disappoint. The prototypical scheme has a metallic finish to it which closely resembles the prototype itself. The lines are crisp and uniform. The Polar Express version is no different. The blues are consistent and the red stripe matches up well with the coaches. The snow detail on the roof of the coaches is a nice touch as well. The signage on the locomotive is incredibly small but legible with a magnifying glass. All of these details make this train look like it’s moving 150 mph while it’s standing still.

Rumor has it this is the last time the Lionel Legacy Acela sets and associated fantasy schemes will be released. At the writing of this article many online retailers are sold out of the Polar Express version and there are a handful of Amtrak and warbonnet sets left. If these appreciate in price similar to the TMCC versions they will be a solid investment for any collector. Hats off to Lionel for delivering on a much-anticipated model.