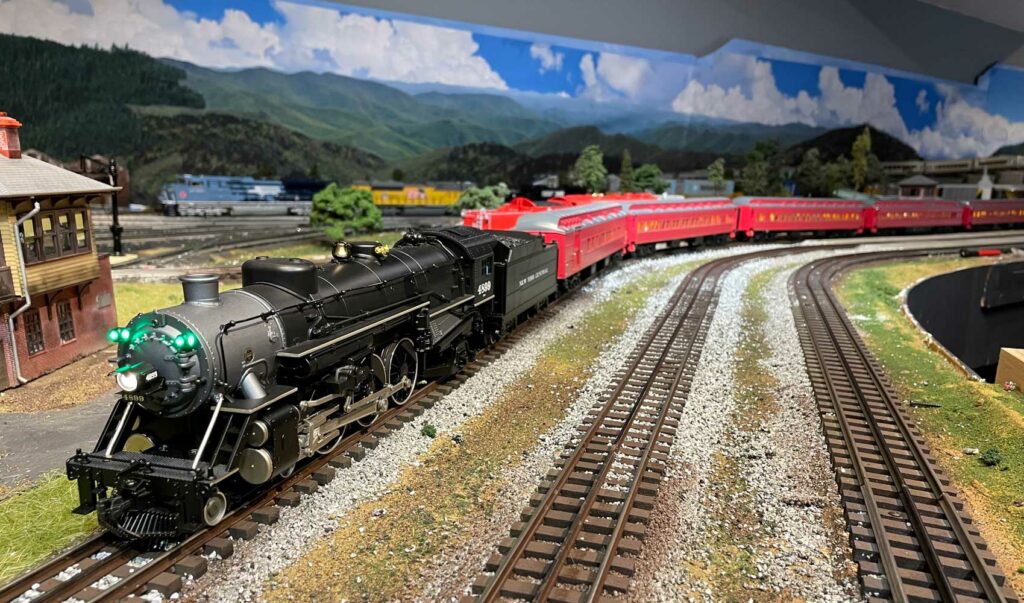 Lionel’s 1926 Cardinals Train Set was kind of hidden in the pages of the 2021 Lionel Volume I “Big Book” behind the re-release of the 2-10-10-2; the Mohawks and Camelbacks; the Acela sets; and the Asa Packer, New Hope & Ivyland consists. It’s a high-end Legacy outfit that features a newly cataloged 4-6-2 Pacific steam locomotive, a combination car, two Pullman coaches, and an observation car. The base set gives you an 98-inch passenger train requiring O-54 curves.

This set represents a prototype. In 1926, the 28th International Eucharistic Congress was set to meet in Chicago, the first time it would be held in the United States. With the Pope’s personal representative from Italy in attendance, it was imperative the Archdiocese of Chicago pull out all the stops.

To get Papal Legate Cardinal Bonzano from New York to Chicago, the New York Central partnered with Pullman to decorate seven cars in cardinal red and gold. This train would pull the religious dignitaries on their 24-hour ride to Chicago.

Shortly after the trip the cars were repainted and put back into regular service. This could account for why this piece of history isn’t all that well known.

I picked my set up from Henning’s Trains in Lansdale, Pa., As far the high-end sets go, this was one that I had not seen any videos or press about. Most of the pomp and circumstance from this catalog was reserved for the Acela.

Upon opening the box, the first thing I noticed was how nicely the cars were decorated. The cardinal red with gray roof and gold trim was nothing short of stunning. With Pullman cars being the bread-and-butter of any steam-era passenger train, the cardinal red really makes these stand out.

The interior of the cars features LED lighting, structural details, and figures. They have adjustable diaphragms and die-cast sprung three-axle trucks. The Station Sounds Diner features car-specific sounds for the name of the diner itself, track clickety-clack, and a variety of announcements and voices.

The locomotive can be operated with Legacy and TMCC control, Bluetooth, and conventionally. It features Legacy Railsounds, stack steam and whistle steam, bi-color marker lights, five different whistle sounds, and all the other features we’ve come to expect from a Lionel Legacy steam engine.

This new Legacy Pacific adds a separate smoke-fluid hole under the steam dome. The front coupler is a scale dummy coupler; an O-gauge solid coupler is in the box for those who want to double-head with another locomotive. The tender rear has a the Electrocoupler feature that we’ve come to know.

The engine tracks very well and its white trim makes it stand out in front of the cardinal red coaches it pulls. The large drivers on the Pacific run smoothly and from what I’ve seen prefer very level track.

This set retailed for $2099.99 with the Station Sounds car coming in at $369. The add-on two pack was $399.99. If you can find this set in a store, it may be one to grab. The limited number I’ve seen available indicate this set might become collectible in the years to come.

Chris Montagna has the Chris’s Trains and Things channel on YouTube.