Review of a colorful caboose 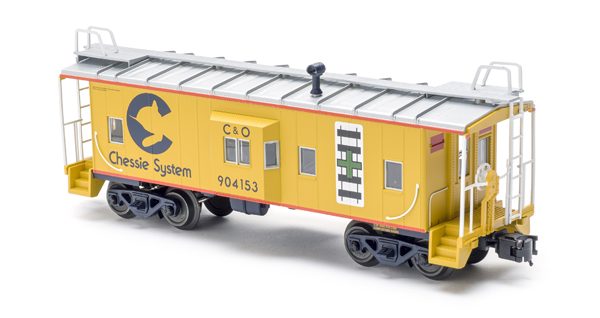 According to Atlas O sales literature, its Trainman-series model is based upon features of the Southern Pacific’s C-30-6 class of bay-window cabooses. The prototype cabooses, numbered 1320 through 1369, were built by the Southern Pacific Equipment Co. between March and June of 1951. The cars came with Standard Car Truck Co. solid-bearing caboose trucks, a Standard Ry. Equipment Co. diagonal-panel roof, and riveted sides and ends.

Our sample is decorated as Chessie System (Chesapeake & Ohio [C&O]) no. 904153, part of the railroad’s C-27A class numbered 904094 through 904159. The full-size cabooses were built by Fruit Growers Express in 1980. The cars had roller-bearing caboose trucks, an X-panel roof, and welded sides and ends. The prototype cabooses didn’t have end ladders or running boards. The C-27A class was the last group of cabooses ordered by the C&O. They were also the only bay-window cars owned by that railroad, a longtime user of cupola-style cabooses.

A closer look
The Atlas O model boasts a one-piece plastic body with a diagonal-panel roof and riveted sides and ends, matching SP practice. The bottom of the bay window is a separate piece. The end cages are separate castings, attached to the body with two pins at the top and tabs that fit into slots on the outer edge of the stepwells.

Tabs along the bottom of each end lock into slots in the plastic underframe. The body is further secured to the underframe with two screws. To reach the screws, you must remove the trucks, which are held in place with a washer head screw. The trucks have wires tethered to a printed-circuit (PC) board. Support the trucks as you remove them from the model to avoid damaging the wires.

Inside is a 2 1//6 x 5 13/32-inch metal weight, which accounts for much of the model’s 14¼ ounces. Attached to the top of the weight is a PC board with four light-emitting diodes (LEDs). Underneath is the on/off switch for the interior lighting. On our sample, the wires from one truck were soldered to the wrong “L” and “R” pads on the PC board, causing the lights not to work. We fixed this by unsoldering the wires and attaching them to the opposite pads.

The paint on our sample was smooth and evenly applied – not an easy task with yellow. The color separation lines were crisp, and all the printing was legible. Lettering placement matched prototype photos in Randall K. Fields’ Chessie System Color Guide to Freight Equipment (Morning Sun Books Inc., 2003). The Green Cross for Safety logo was accurately rendered to the right of the bay window. I appreciated that almost all the molded grab irons were painted white.

The caboose performed without incident while being pushed and pulled through Lionel FasTrack O-36 and O-60 turnouts and curves. The rotating bearing caps were a nice touch.

It’s been 12 years since the Atlas O Trainman-series bay-window caboose made its debut, but the model is just as good as ever. Though the O-31 caboose is based on a Southern Pacific prototype, the Chessie System paint scheme looks right at home on the model.