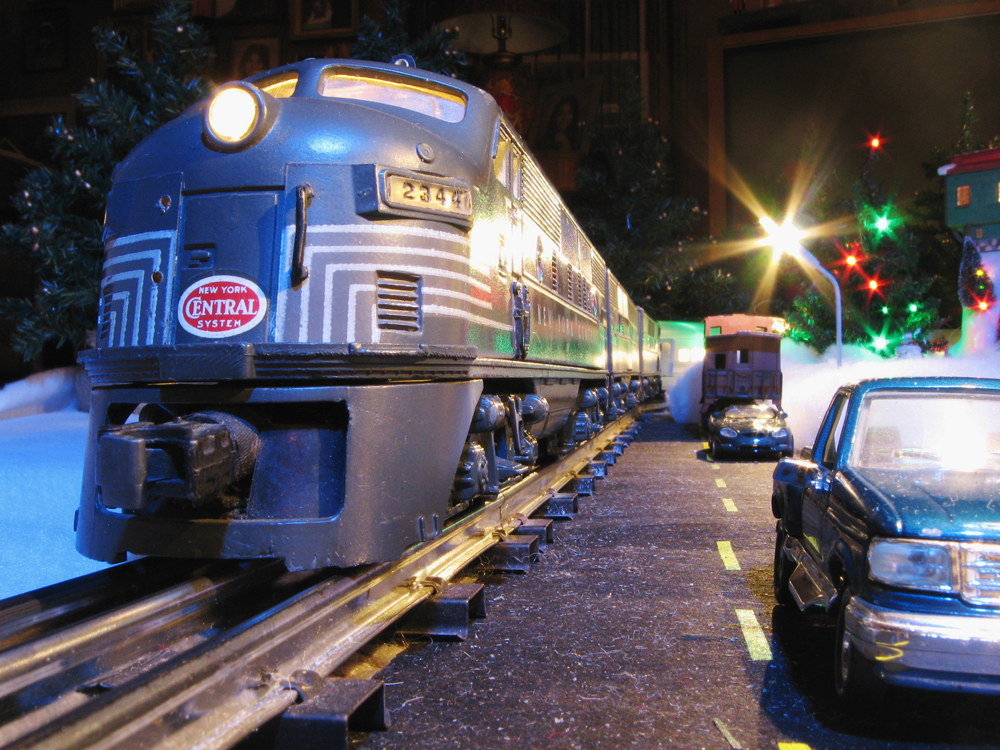 A 2022 holiday toy train photo gallery is just the thing to get you in the Christmas spirit. Please enjoy this selection of holiday-themed photos of toy trains from Lionel and American Flyer in O gauge, S gauge, and Standard gauge (with some bonus N and large scale trains).
If you have a photo you’d like considered for a future gallery, contact editor@classictoytrains.com

Dave Sanders’ O gauge layout
There is a surreal quality to the scene Dave Sanders photographed on his layout in San Diego, Calif. Amid the backdrop blending with the snow-covered mountains and fir trees, Dave has inserted an exceedingly diverse group of figures associated with Christmas, including Santa Claus, the Magi from the New Testament, and Frosty the Snowman. Interrupting their reverie is the MTH Chicago & North Western 4-6-4 Hudson steamer and tender.

Glenn Fresch’s O gauge layout
Let David Fresch get together with his dad, Glenn, and the results are guaranteed to be spectacular. The elder Fresch has assembled an impressive roster of Lionel trains from the late prewar and postwar eras at his home in Cranston, R.I. His son brings wonderful talents with a camera and the perfect touch for creating memorable scenes with trains and details. We end up with a delightful photo that carries us back more than half a century.

Wayne Staley’s O gauge layout
You can take the kid out of Philadelphia, Wayne Staley might tell his friends in the toy train hobby, but you can’t take the Philly out of him. What would he mean? Even though this native of the City of Brotherly Love resides in the desert community of Lancaster, Calif., he exhibits loyalty to the Pennsylvania RR on the temporary layout he sets up every year during the holiday season. Wayne runs a Philadelphia & Reading RR 4-6-0 and passenger cars from MTH on the main level. A Pennsylvania RR K4 Pacific 4-6-2 (also from MTH) rules the elevated roost. The steamer and its passenger train have just arrived at Victoria Station.

Mike Matejka’s O gauge holiday display
During the very early years of our magazine, Mike Matejka was a familiar presence. This resident of Normal, Ill., wrote frequently about Lee Price and the other salesmen who had worked in the office Lionel had once maintained in Chicago. We look forward to getting photographs of O gauge trains from the modern era that he shoots in December. Getting the star treatment this year as it rocks around the Christmas tree at his home is a No. 1663 Amtrak Lake Shore Limited outfit, which Lionel cataloged in 1976 and ’77.

Wayne Nolasco Sr.'s S gauge layout
The short letter that Wayne Nolasco Sr. sent with this evocative photo of his S gauge layout in Cape Coral, Fla., put it simply and yet so effectively. “These American Flyer trains were something my dad started when I was a kid back in the 1950s. We had a Christmas layout every year when I was growing up, and the love of these trains has never left me.” The Santa Fe Alco PA-PB-PA combination he snapped leading streamlined passenger cars on one of his main lines stands out among the powerful steam engines on his roster.

Philip VanDevelde’s O gauge layout
One good look at this picture snapped by Philip VanDevelde of his compact O gauge model railroad in Essington, Pa., and you understand just why he called it “Happy Holiday Village.” The Merry Christmas trolley from MTH Electric Trains is passing through a rural settlement from long ago a day or two after enough snow has fallen for children to make snowmen. Now, with temperatures plunging fast, boys and girls are lacing up their ice skates by the frozen pond. They know only too well tomorrow is Christmas.

Leonard Feltus II’s O gauge layout
The fallen snow covering a busy yard laid out in the foothills of the Sierra Nevada Mountains on Leonard Feltus II’s O gauge layout make the assignments and chores of local rail workers a lot harder and more uncomfortable. So the crew of this mighty Western Pacific 4-8-4 steam engine is glad they’re inside the warm cab. The white striping on the Lionel model (No. 38080) looks very sharp against the snowy ground, with tall bushes flecked with white stuff behind. It almost makes Leonard welcome the arrival of winter at his hometown of Elk Grove, Calif.

Richard and Bonnie Rasmussen’s multi-gauge layout
The centerpiece of the train room designed by Richard and Bonnie Rasmussen, who make their home in Choctaw, Okla., is this multi-gauge layout reminiscent of a store display from decades past. The talented couple refuses to pick their favorite gauge or manufacturer. Instead, they have built a snow-covered, tree-filled mountain nearly 8 feet high, and added loops of track handling everything from Large scale to N scale trains. When pressed, the Rasmussens confess to a deep-seated love of sets from the old Lionel O gauge and American Flyer S gauge lines.

Caryl Pettijohn’s Standard gauge layout
Favorable responses to the article in the October 2013 issue of Classic Toy Trains about the Hollyberry Farm Train Barn, which houses the huge Standard gauge layout belonging to Caryl Pettijohn, inspired us to search for additional pictures taken by Dennis Brennan. He recalled posing an American Flyer passenger set as it circled by a village filled with Department 56 structures.