The crew figure gives this O gauge model its life 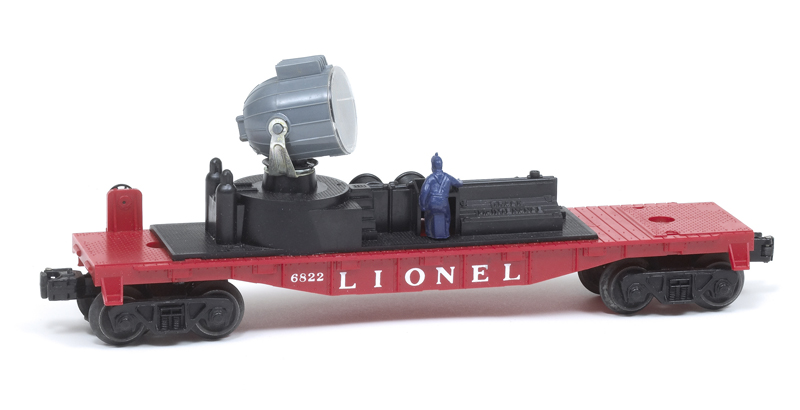 Improving a basic model: 1949-56
Lionel did not immediately fill its postwar line with a true searchlight car – just a work caboose equipped with a floodlight (no. 2420). The presence of a searchlight car in the rival American Flyer catalog, beginning in 1946, makes this omission more glaring.

In 1949, Lionel brought out the 6520, distinguished by an injection-molded replica of a General Motors diesel generator. Remote-control operation of the stationary light depended on a special track section.

Three years later, Lionel heralded the improved no. 3520. It looked the same, but now the light rotated.

Operation remained dependent on remote control until 1954. A further improvement led to the no. 3620, whose floodlight turned automatically as the die-cast metal car was pulled around a loop of track.

Adding more play value: 1956-61
For 1956, designers developed the no. 3650 searchlight extension car. Although its floodlight did not rotate when the model traveled, it could be removed from the base to illuminate activities along the right-of-way. The long spool of wire meant it could be located far from the tracks.

Clever also was the no. 3535 security car with rotating searchlight, which Lionel brought out in 1960 after discontinuing the 3650. This model used the body shell of a no. 520 boxcab electric, the anti-aircraft guns from a Pyro military vehicle mounted on a Lionel flatcar, and the familiar rotating floodlight.

Time for a crew figure
Lionel kept the 3535 in its line for a second year, but the odd look of this car probably doomed it. To their credit, company designers devised yet another model equipped with a searchlight. Its unique appearance met with approval.

The 6822 departed from the 6520 and its kin in having a red plastic flatcar (shades of the polystyrene varied). On the base were a polystyrene maintenance structure and a nylon searchlight. Lionel paired the black structure with a gray light in 1961-62. From 1963 on, the structure was gray and the light was black.

Most importantly, this final searchlight car broke new ground by having a vinylite figure with painted face and hands added to the base. Someone at Lionel realized that putting a small railroad laborer on the car would heighten its appeal.

The trick of installing a figure, used so frequently on American Flyer S gauge rolling stock, gave life to the 6822, which was otherwise a sterile car. Ironically, its light didn’t revolve; in operation, therefore, the night crew searchlight car carried Lionel back to the limits of its various prewar models.

One thought on “Lionel no. 6822 night crew searchlight car”