Knowledgeable hobbyists will likely tell you the line Lionel cataloged for 1954 represented the pinnacle of post-World War II production. In their opinion, the roster of steam and diesel locomotives, freight and passenger cars, and operating accessories was unsurpassed in terms of design, creativity, appearance, and operation.

The No. 2219W five-car freight train headed by a brand-new No. 2321 Lackawanna Train Master road diesel grabs our attention, not least because this “Thunderbird” train set features a gondola and hopper that wear different paint schemes from those they had worn in previous years. 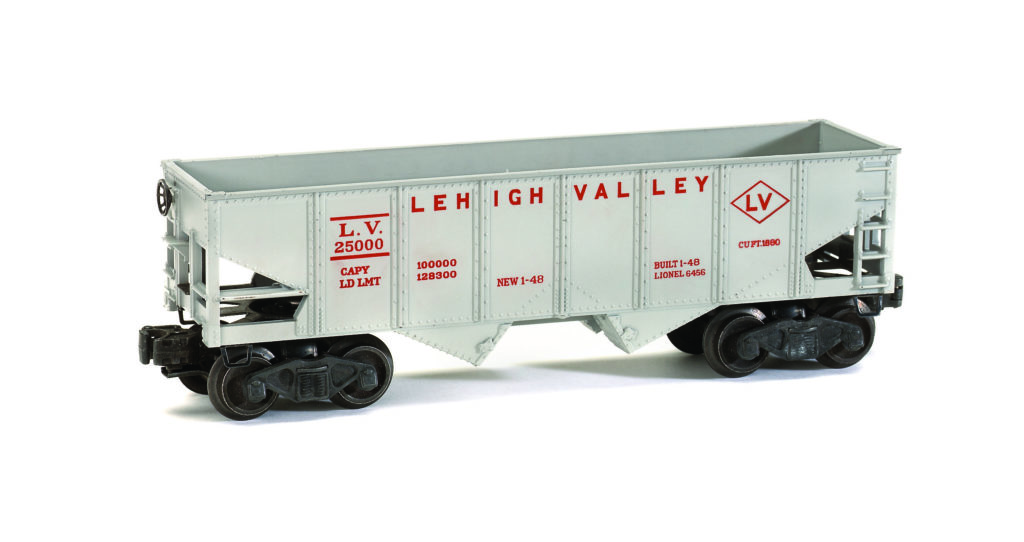 First up was the no. 6456-25 Lehigh Valley hopper. The 9¼”-long car had made its debut back in 1948 as the no. 2456 in black. The same year, Lionel had updated the rugged little model by equipping it with newly developed magnetic trucks and couplers. That noteworthy change had justified renumbering it as 6456.

During its first few years in the cataloged roster, the 6456 hopper had been available in either black or maroon with white heat-stamped graphics. In spite of being prototypically correct and realistic, the schemes were decidedly drab.

The 6456-25 came painted gray with maroon markings. The scheme had an elegance about it, especially because it matched the colors used to decorated the Lackawanna Train Master used to pull the five-car freight train in set 2219W.

Next was the no. 6462-25 New York Central gondola. Lionel offered it as a separate-sale item also priced at $4.75 as well as a part of two O-27 outfits (the nos. 1503WS and 1517W) and the O gauge 2219W Thunderbird. The catalog illustration of the latter train had the gondola trailing far behind the engine and next to the no. 6417 Pennsylvania RR N5c porthole caboose with illumination.

The 6462-25 measured 10 3/8” long and came packed with six stained wood barrels. It was a familiar sight to Lionel modelers as the company had been cataloging near-scale gondolas since introducing an all-black version equipped with metal steps and brake wheels in 1949. Red versions, some lacking those notable details, first appeared a year later.

To make good on its promise to inject color into the line cataloged for 1954, Lionel added this green-painted gondola. The 6462-25 was highlighted in the consumer catalog as “a masterpiece of precision-scaling.” It looked just right, even when paired with the big Train Master, as though it could handle every job.

Collectors should be aware that two variations of the green gondola have been reported. The first had the “N” of New York Central printed in the second panel from the left side. Two lines of car data were included in the decoration. The second variation had the “N” in the third panel as well as three lines of data.  Sticking around

Executives must have been pleased with the two newcomers – or had a lot of unsold inventory to unload – because they cataloged the gray hopper for one more year and the green gondola for three more years. Perhaps the pair seemed more toy-like and less realistic than Lionel modelers preferred by the mid-1950s. Or the short hopper paled beside the near-scale covered hopper added in 1955.

Lionel’s O gauge set no. 2219W, named The Thunderbird in the consumer catalog for 1954, featured the nos. 6456-25 gray Lehigh Valley hopper and 6462-25 green New York Central gondola among its five pieces of rolling stock, all pulled by the brand-new no. 2321 Fairbanks-Morse Train Master decorated as the Lackawanna.