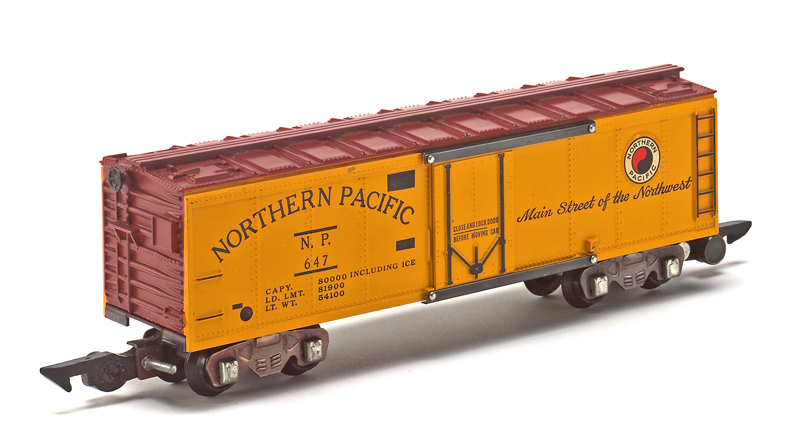 Glancing at the catalogs put out by the A.C. Gilbert Co. and the Lionel Corp. from 1952 or ’55 or ’58, you notice how similar the product lines were. Both Gilbert, which developed the American Flyer line of S gauge trains, and its rival marketed train sets at various price points to entice households with small or big budgets. Both firms produced a broad array of steam engines with whistles, smoke units, and other features. And huge lists of accessories, from streetlights and bumpers to stations and loader!

Then subtle differences between the two lines of trains reveal themselves.

The American Flyer roster of passenger trains sure outdistanced the one in Lionelville. With freight cars, Lionel got plenty of mileage from putting various loads on its flatcars, a trend that hardly touched its rival. Gilbert, in turn, introduced an array of colorful and interesting tank cars and more road names for its covered hoppers.

Starting small in 1951
Refrigerator cars reflected the same discrepancy. The American Flyer roster contained a rainbow of models with realistic graphics, whereas Lionel seemed satisfied to catalog one or two cars at a time, with basic decoration.

Interestingly, Lionel was first after World War II to offer what was considered a refrigerator car, and that occurred in 1950. It brought out the plain no. 6472, which was little more than a non-operating version of the 3462 milk car.

A year later, Gilbert jumped in with an uncataloged model, the no. 639, as simple a refrigerator car as could be imagined. Then two additional cars, both uncataloged, were reported in 1952, the nos. 633 Baltimore & Ohio (painted red or Tuscan Red) and 642 American Flyer, along with the 639 once again.

Flexing some muscle in 1952
What gave Gilbert the edge when it came to refrigerator cars? Easy – the no. 647 that distinguished the cataloged Flyer line in 1952. It sure appealed to your visual senses, and the realistic graphics and scale details met the expectations of the most finicky S gauge model railroader. This was a classic!

The 647 remained in the line through 1953. It featured a plastic body shell secured to a sheet-metal frame. The sides of the shell were painted orange, with the ends and roof painted in Tuscan Red. The doors slid open and also were done in orange, with a black-painted locking mechanism on each door.

The Northern Pacific’s name and slogan, plus its famed monad emblem added in a black, red, and white decal, looked absolutely terrific when set against the orange shell. Additional details included black-painted ladders and grab irons.

In 1952, the 647 refrigerator car was shown in the annual catalog as only a separate-sale item (no price was specified that year; in 1953, the catalog assigned this model a price of $3.95). Gilbert released an all-but-identical car in 1953 that came equipped with the firm’s brand-new knuckle couplers. Given the number 947, it could be purchased by itself for $5; it was a component of three top-notch freight sets.

Drive for realistic freight cars
The 647 Northern Pacific refrigerator car reflected the commitment by those in charge of the American Flyer line to develop realistic models of the principal types of rolling stock. And to put on those cars prototypical decoration that was sure to capture the interest of dedicated scale modelers.

One thought on “American Flyer’s no. 647 Northern Pacific refrigerator car”