Home / How To / How to update your LionChief Universal Remote

New firmware might help with connection issues – and give you a bonus! 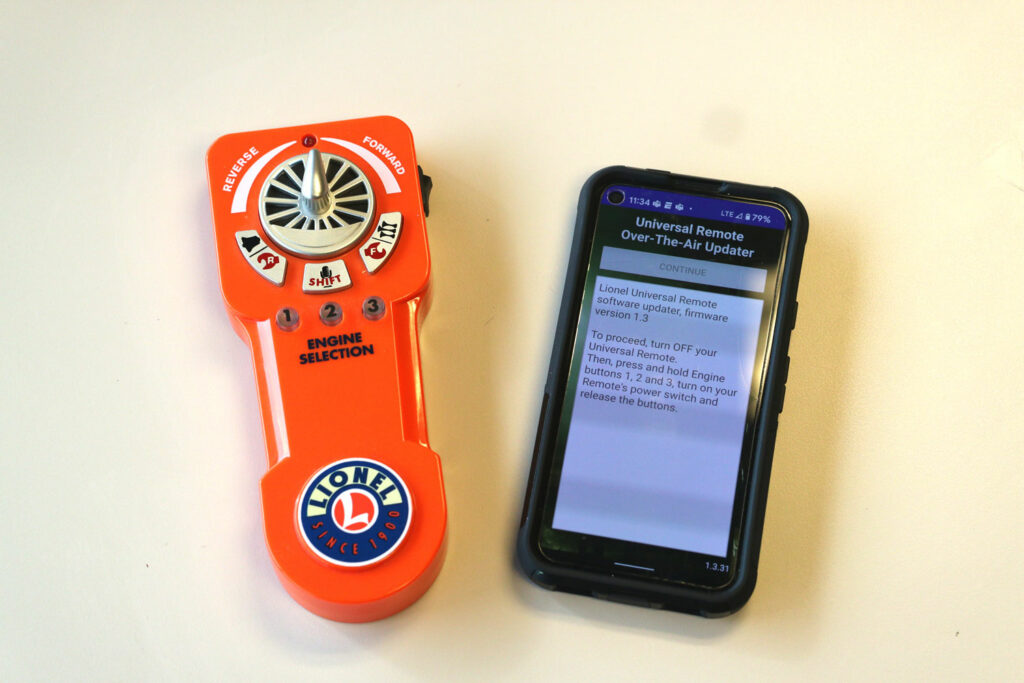 Can’t get your new LionChief Universal Remote to pair with a locomotive? If the batteries are good, the device’s firmware might be the problem – it could be old and incompatible with your equipment, or just have bugs. Upgrading it might help establish a connection and get your trains rolling.

The hand-held units have been around since 2016. Even if you bought a new yesterday, it might have the original firmware in it. It’s easy to upgrade to the latest, which is version 1.3 as of December 2021.

Finding out the hard way

A co-worker needed a train for a holiday related video project. “No problem,” I told him. I knew we had a Lionel LionChief Polar Express set stashed in one of the cabinets; it would be great for the task.

The good news: I found the locomotive and cars. The bad news: The hand-held remote that controlled it had disappeared, and as it was LionChief and not LionChief Plus, I couldn’t just use my smartphone and Bluetooth to make it go.

I rummaged through our cart of control systems that pretty much includes one (and sometimes two) of everything. I found LionChief remotes to several engines we’d reviewed over the last few years, except, of course, the one for the no. 1225 Polar Express Berkshire.

Aha! I found a Universal Remote. Christmas is saved!

It even had good batteries in it. I placed the locomotive and tender on the track and applied power. There was sound – so far so good. Then I turned on the remote, pressed and held the “1” button to clear any other connections, and then pressed it again to find the 1225. The 1 light just kept blinking, and the locomotive sat and simmered.

After a frustrating hour of trying different sequences to pair the locomotive and remote, I looked to the Internet and downloaded a copy of the most recent manual for the product, seeing the instructions for updating the firmware.

As it turns out, my remote, which had been with Classic Toy Trains since it was released, had version 1.

To update you need an Apple or Android smartphone or tablet with Bluetooth, and a connection to the Internet. This link to the manual details the process.

Once you download the Lionel Universal Remote Updater app from Google Play Store or Apple App Store, and open it, it prompts you through the procedure.

The short version is your phone or tablet transfers the update to the remote via Bluetooth in about 5 minutes with an Apple device and about 30 minutes for Android. A slider bar tracks progress.

It’s best to just walk away and let it do its thing. With an Android phone it really does take a half-hour. Don’t turn it off or you’ll have to start over.

When it’s done, all three number lights should shine steadily. Just cycle the remote off and back on and you’re ready to go.

Success! Plus a bonus

Sure enough, I applied track power to the locomotive, turned on the updated remote, pressed the 1 button, and it paired up with the 1225. Just to make sure all was well – and to have a little fun – I had the train tick off a few laps, blowing the whistle and letting the bell clang. Everything worked as advertised.

I think the neatest thing the v1.3 update adds is a “hotspot mode.” It allows you to operate the locomotive from your smartphone or tablet through the hand-held remote. The previous link has instructions on how to activate the feature. It’s great if you enjoy running trains this way but have non-Bluetooth equipped engines.

So if you should happen to buy a LionChief Universal Remote and it doesn’t work, it might not be a problem with you. It’s the firmware. The good news is the fix is just as close as your smartphone or tablet.