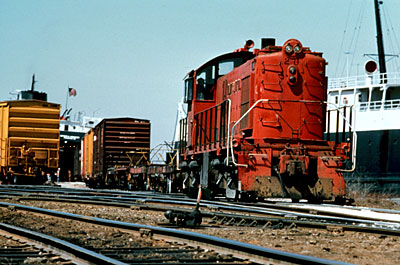 For over 100 years, trains and ships were partners in serving the eastern and western shores of Lake Michigan.

This unique form of transportation began November 27, 1892, when Ann Arbor No. 1 sailed from Kewaunee, Wis., to Frankfort, Mich., (then called Elberta) with 22 freight cars.

Prior to the launch of the Ann Arbor No. 1, which had rails embedded in its deck, goods were unloaded from freight cars onto lakeboats, then reloaded onto trains at the other shore. Thus, a new type of transportation was introduced – a rail ferry that let freight cars, and the commodities they handled, cross a large body of water seamlessly.

Transporting freight cars across Lake Michigan grew out of the need to bypass the congested rail yards in Chicago. Between time spent in interchange, classification yards, and transfer runs, it often took a week or more to get a freight car through Chicago. To reduce transit times of goods traveling cross-country, some Midwest railroads experimented with sending rolling stock across Lake Michigan in large boats, thereby avoiding the time-consuming Chicago transfer. 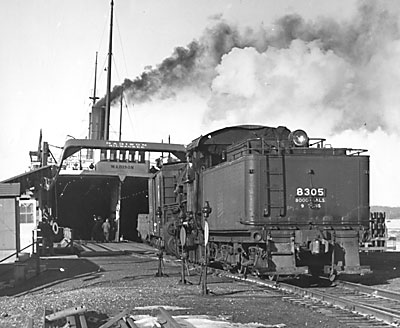 At their peak, carferries sailed across Lake Michigan on up to 15 different ferry routes, although after World War 2, cross-lake rail service was concentrated on seven routes, operated by three different railroads: Ann Arbor, Grand Trunk Western, and Pere Marquette, which became part of Chesapeake & Ohio in 1947.

Ann Arbor was the pioneer in Lake Michigan carferry service, operating three routes from a hub in Frankfort, Mich., to Sturgeon Bay, Kewaunee, and Milwaukee. After the company’s bankruptcy in 1973, successor Michigan Interstate continued providing rail and carferry service until 1982, when it lost its operating subsidy from the state of Michigan.

The Grand Trunk Milwaukee Ferry Company, a subsidiary of Grand Trunk Western, was the smallest carferry operator on Lake Michigan, with a single route from Muskegon, Mich., to Milwaukee, which lasted until 1978. 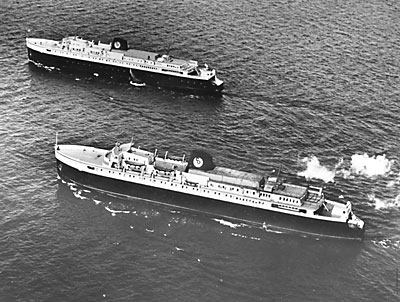 Like locomotives, the earliest vessels of the Ann Arbor and Pere Marquette were numbered, rather than named like ocean ships. Grand Trunk later switched and started naming its boats as early as 1903. Pere Marquette and Ann Arbor soon followed, using both names and numbers.

The carferries were originally designed to haul only railroad cars, but when Pere Marquette launched the City of Saginaw 31 and City of Flint 32, all of that changed. They were large, modern boats, built to accommodate the early 1930s tourist trade with comfortable, Pullman-style staterooms, large dining rooms with lake views, and facilities for loading and transporting private automobiles.

Manitowoc Shipbuilding was a leader in carferry construction and reached its zenith prior to the Great Depression. The last boat it assembled was the $2 million City of Midland 41 for Pere Marquette in 1941.

Another Wisconsin company, Christy Corporation of Sturgeon Bay built the final two Lake Michigan carferries in 1952, the Badger and Spartan, honoring the University of Wisconsin and Michigan State University football team mascots. The contemporary boats hearkened back to the streamlined era of carferry building, with clean lines, curved smokestacks, and art deco styling. They cost $5 million each and were capable of running at speeds of up to 18 mph. 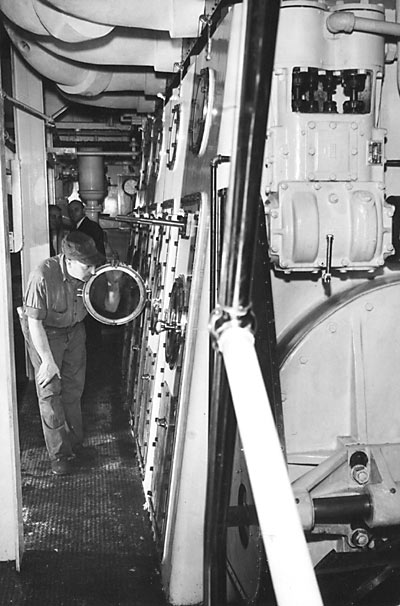 One of two unaflow engines aboard C&O’s carferry City of Midland. Windows allowed the engineers to observe operation of the engine parts.
Chesapeake & Ohio Railroad

The big boats were powered by dual, Skinner Marine Unaflow, coal-fired steam engines, and were the last coal-burning, passenger-carrying boats built in America. The powerful Skinner engines responded very quickly when reversing direction, an extremely important capability since the boats docked without the aid of tugboats.

The Unaflow engines were also helpful to the boats in their continual battle against ice. The boats traveled Lake Michigan year-round, and ice was their number one enemy. Ice could surround a boat and render her immobile, drive her aground, or cause damage and sink her.

On October 22, 1929, one of the big boats did sink. Grand Trunk’s Milwaukee, departed from her namesake city with 25 freight cars bound for Grand Haven. Lake Michigan storm warnings had been posted, with strong northeast gales of 34-37 mph recorded, but Captain Robert McKay chose to sail anyway. The boat was sighted heading directly into the storm and was said to be pitching and rolling heavily.

A Coast Guard patrolman near South Haven, Mich., found the boat’s message case with a handwritten note: The ship is taking water fast. We have turned around and headed for Milwaukee. Pumps are working but sea gate is bent and can’t keep the water out. Seas are tremendous. Things look bad…. signed A.R. Sadon, Purser. 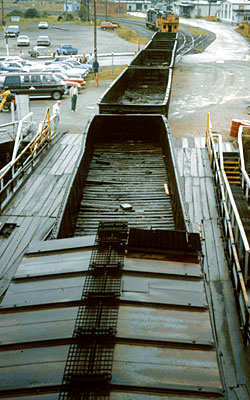 Loading railroad cars onto the full-size boats was a fascinating process.

Train crews placed “idler flats” or spacer cars between the switch engine and freight cars. This method of loading and unloading ensured that the heavy locomotive never entered the ship’s deck, which could sink or capsize the vessel.

The lower deck contained four level holding tracks that could accommodate between 24 and 34 railroad cars, depending on the ship’s size.

Ann Arbor developed a unique system to secure freight cars that became universal on Great Lakes carferries. A pair of rails, called jacking rails, were laid 25 inches outside the railroad tracks embedded in the ship’s deck. Screw jacks were used to lift the railroad cars off their trucks. The cars were then secured to the jacking rails with chains. This prevented the car’s independent motion when the ship pitched and rolled on heavy waves.

A Lake Michigan crossing averaged 60 miles and took between 4 and 7 hours, depending on the weather, the payload, and speed of the boat. Average crew size on a boat ranged between 55 and 60 men, who loaded and secured approximately 24 railroad cars, fueled the engines, piloted the boat across the lake in all types of weather, and unloaded the cars.

Compared to the typical 1970s five-man railroad crew, which could handle a 125-car freight train, the boats were clearly costly and labor intensive. Fuel alone consumed an average of 70 tons of coal daily. 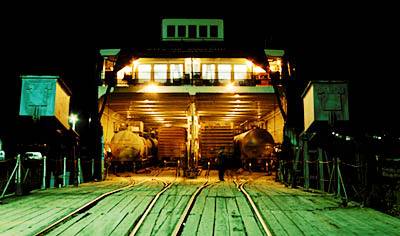 The lower deck and loading apron of Chessie’s carferry City of Midland can be clearly seen in this view at Kewaunee, Wis., taken at 1 a.m. in October 1976.
Lou Geraro

On March 18, 1975, Chesapeake & Ohio petitioned the Interstate Commerce Commission to discontinue all ferry service, claiming losses of $4 million a year. After four years of deliberation and hearings, the ICC authorized a compromise agreement called the “Kewaunee Package.” This permitted the suspension of service to Milwaukee immediately in 1979, Manitowoc in 1980, and Kewaunee in 1983. However, the ICC did request that Chesapeake & Ohio keep existing freight rates fixed to help protect the small Green Bay & Western.

GB&W operated a 254-mile railroad from Kewaunee to interchanges with the Milwaukee Road and Chicago & North Western at Winona, Minn., plus a principal connection with the Burlington at East Winona, forming the western link of a bridge route around Chicago. GB&W relied heavily on its rail-water connections from Chesapeake & Ohio and the Ann Arbor.

Deregulation in 1980 dealt a further blow, as Chessie System and Burlington Northern began routing more traffic on their own lines into Chicago, rather than hand off cars to GB&W for the shorter trip across Lake Michigan. Virtually all bridge route carferry business disappeared, and GB&W lost nearly one third of its traffic base. 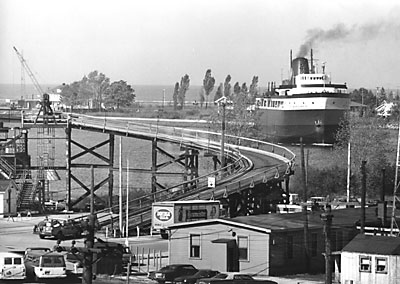 Chessie’s carferry City of Midland arrives in Ludington, Mich., on October 15, 1979. The ship will make a 180-degree turn before backing up to the pier. The ramp in the center of the photo was used by automobiles to enter and leave the ship.
John Uckley

Shortly before Chessie’s carferries were scheduled to end service on July 1, 1983, a group of businessmen in Ludington, Mich., formed the Michigan-Wisconsin Transportation Company. MWT leased three boats and port facilities from Chesapeake & Ohio for six years.

During that period, MWT struggled financially. In 1989, only 2500 freight cars crossed the lake – less than 10 cars each trip – and all for paper companies in Wisconsin, rather than bridge traffic.

Unable to make a profit, and advised by its insurance company to end service to Kewaunee after the Badger began scraping the lake bottom in the town’s harbor, MWT operated the last railroad carferry from Kewaunee to Ludington on Friday, November 16, 1990. For GB&W, the embargo of rail traffic meant a loss of $1 million in revenue. 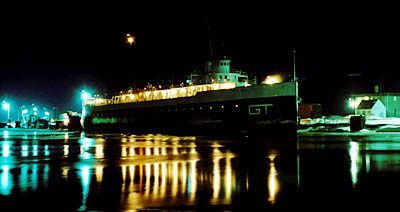 Of the once proud fleet of Lake Michigan carferries, only one remains in service today. C&O’s S.S. Badger, now operated by Lake Michigan Carferry Service, still carries passengers and automobiles – but not railroad cars – between Ludington, Mich., and Manitowoc, Wis., during the summer months.