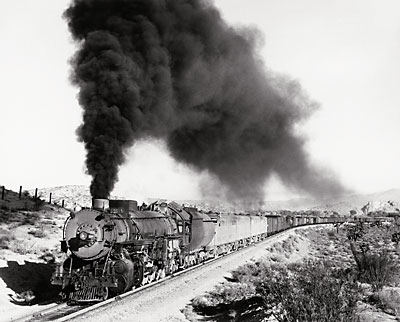 A Union Pacific 2-10-2 helps a four-unit Alco FA diesel roll a westbound freight up Cajon Pass near Victorville, Calif., in October 1950.
Stan Kistler
Stan Kistler is a well-known professional photographer and photofinisher in Grass Valley, Calif. Kistler began photographing trains in the early 1940s when he was growing up in Pasadena, documenting the Southern California railroad scene with roll-film and Speed Graphic cameras, supported only by public transportation and the limited income of a teenager.

Kistler’s passion became a profession, and he later spent 13 years at Caltech before joining the Grass Valley Group and establishing his own photo business. His book Santa Fe Steel Rails through California was published in 1963. Kistler received the Railway & Locomotive Historical Society’s award for photography in 1996.

“It was an exciting period to be trackside,” Kistler wrote in the Spring 2000 issue of Classic Trains magazine, commenting on the photographs he made in the 1940s and ’50s. “I was privileged to be a railfan and a spectator to this era of Southern California rail history.”