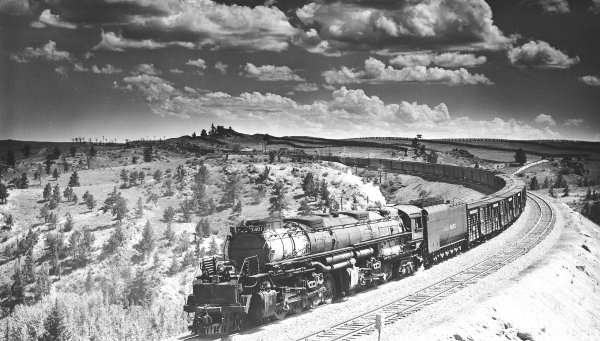 Big Boy 4012 starts down the west side of Sherman Hill in June 1949. Cars of livestock are coupled right behind the tender.
Richard H. Kindig
Richard H. Kindig is best known for his magnificent views of steam locomotives laboring in the mountain passes of the West in the 1930s and 1940s. With his trademark postcard Graflex camera, Kindig photographed the main-line Rocky Mountain action of the Union Pacific, Denver & Rio Grande Western, and Santa Fe, as well as vanishing narrow-gauge pikes such as the Rio Grande Southern and Colorado & Southern.

Kindig received the Railway & Locomotive Historical Society’s award for photography in 1984, and has the distinction of having a photo published in the first issue of TRAINS magazine, November 1940.

“Photography was a totally different approach to the railroads,” Kindig told Classic Trains magazine in a Summer 2000 interview. “That’s why I preferred it.”