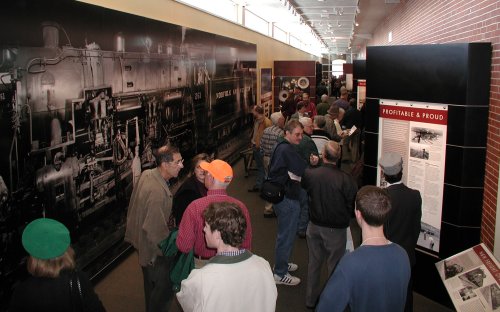 Visitors gather in the main gallery of the new O. Winston Link Museum during its grand opening ceremony on January 10, 2004.
Robert S. McGonigal
In Roanoke, Va., an estimated 1000 people attended grand opening ceremonies for the O. Winston Link Museum on Saturday, January 10, 2004. The museum, located in the former Norfolk & Western Railway passenger station in downtown Roanoke, is devoted to the life and work of the late O. Winston Link. The New York-based industrial photographer chronicled the last years of N&W steam locomotives between 1955 and 1960. Link’s most famous photographs are night compositions made possible by elaborate lighting set-ups. 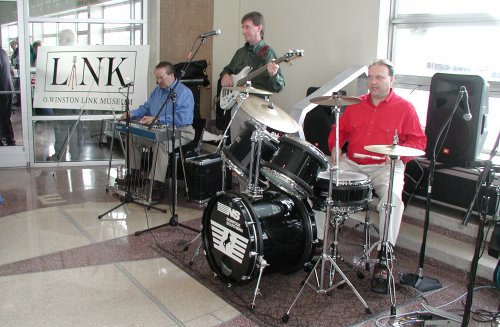 The “NS Lawmen,” a band formed of local Norfolk Southern employees, provided entertainment during the festivities.
Robert S. McGonigal
The opening ceremony began at 10:00 a.m. Museum officials, U.S. Rep. Bob Goodlatte, and Roanoke Mayor Ralph Smith, made remarks, then Norfolk Southern Corp. Chairman David Goode opened the museum’s front door, and visitors began filing in to see the exhibits. Music was provided by the “NS Lawmen,” a band formed of local employees; NS freights supplied other accompaniment as they rumbled by just outside the depot’s windows. 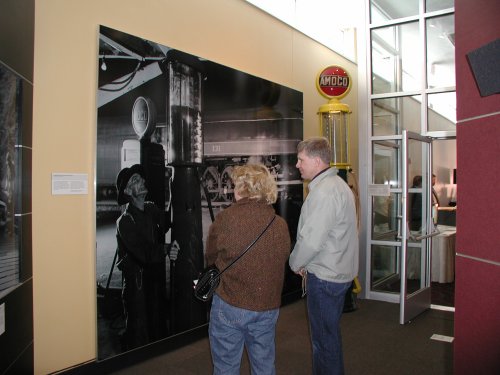 Patrons view one of the exhibits at the O. Winston Link Museum.
Robert S. McGonigal
While some visitors enjoyed the exhibits, others attended presentations in the museum’s theater. Organizing Curator and onetime Link assistant Thomas H. Garver spoke about what it was like to work with the brilliant, somewhat eccentric photographer. In another talk, Garver addressed the question of why Link took on his massive N&W project-paid for with his own funds (some $125,000 in today’s dollars) at a time when there was no proven demand for such pictures.

Another presentation, “The Trouble with Conchita,” dealt with the criminal activities of Link’s ex-wife, convicted in 1996 for stealing $2 million worth of his photographs and recently rearrested on related charges. J. Edward Meyer, Link’s attorney, and Ken Citarella, assistant district attorney in Westchester County, N.Y., spoke entertainingly on this sad episode, which they and others helped bring to a largely happy ending. 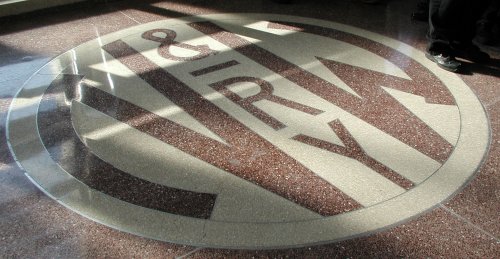 The Norfolk & Western Railway logo still adorns the floor of the former Roanoke passenger station that now houses the O. Winston Link Museum.
Robert S. McGonigal
The Link Museum cost more than $6 million to create, and occupies some 15,000 square feet. It is the largest collection of Link’s photos, and is thought to be the only museum in the U.S. devoted to the work of a single photographer. To learn more, go to www.linkmuseum.org.
You must login to submit a comment
Related Articles