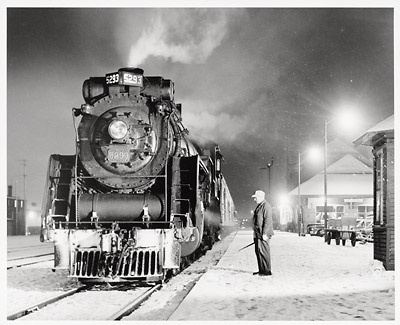 On a cold night in Sherbrooke, Que., in February 1957, the engineer of Canadian National 4-6-2 No. 5293 admires his steed.
Jim Shaughnessy photo; TRAINS collection.
By day and by night, in color and black-and-white, and on railroads big and small, Jim Shaughnessy has produced a vivid record of the railroad and its environment.

Though perhaps best known for early night photography, shots of people in roundhouses and shops, and books on the Delaware & Hudson and Rutland railroads, Shaughnessy remains an active railroad photographer today. He began taking photographs in the late 1940s, capturing the end of steam in the northeast U.S., Canada, and Mexico, and continued photographing the first and second-generation diesels that followed in New England and throughout the U.S.

A civil engineer by trade, Shaughnessy has helped people with dozens of books, starting with Lucius Beebe, setting the pace for the field as we know it today. He was honored for his work by the Railway & Locomotive Historical Society, which in 1987 presented him with its lifetime achievement award in photography.

“I like pictures with people in them or something, not contrived, that capture a moment in time,” Shaughnessy tells Classic Trains magazine in its Fall 2001 issue. “There is more to it than just the locomotive. The station scenes, the countryside, umpteen million possibilities.”