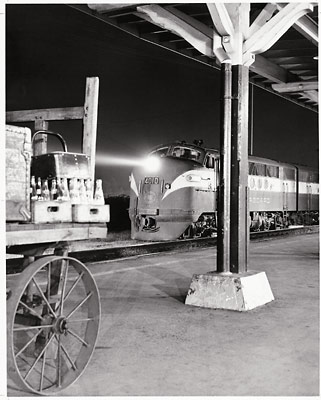 It’s quiet at the depot in Raleigh, N.C., as a pair of FT diesels does some switching on an evening in October 1962.
J. Parker Lamb
Equally adept at both color and black-and-white, J. Parker Lamb has been taking photos since the fall of 1949 when he was in the eleventh grade.

A native of Alabama, Lamb photographed railroads throughout the Deep South in the early 1950s – from New Orleans to Memphis to Atlanta to Mobile – at a time when steam was giving way to diesel. As an Air Force officer assigned to Dayton, Ohio, in the mid-1950s, Lamb caught the steam-diesel transition on the New York Central, Pennsylvania, and Baltimore & Ohio, and documented the early diesel era in Illinois, while doing graduate work, and in North Carolina.

Lamb continued photographing and writing about railroads during his 38-year tenure with the University of Texas-Austin’s school of engineering, with bylines in a variety of railroad publications and as the author of three books, one showcasing his photography (Steel Wheels Rolling). The Railway & Locomotive Historical Society honored Lamb in 1991 with its lifetime achievement award in photography.

Lamb’s goal is to make technical subjects into artistic objects, notes Classic Trains magazine in an interview with Lamb in its Winter 2000 issue, and “display railroad machinery within scenic compositions that cause people to respond with a comment such as, ‘Now, that photograph makes the train look beautiful!'”