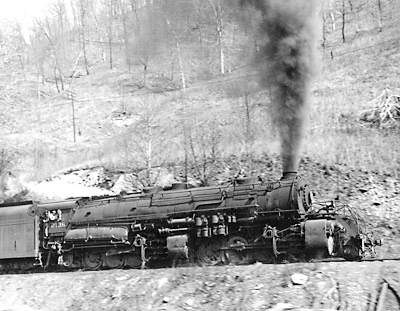 Norfolk & Western Y6-Class 2-8-8-2 No. 2136 thunders east near Delbarton, W.Va., with a coal train on March 25, 1959.
Bruce R. Meyer
Bruce Meyer has been on a search for steam since he started taking railroad photographs in the early 1950s. Meyer made a dramatic record of steam’s final years in the Midwest and eastern U.S., and recalls countless visits to the Illinois Central, Pennsylvania Railroad, Norfolk & Western, Baltimore & Ohio, Nickel Plate, Canadian National, and Canadian Pacific.

As the fires of main-line steam locomotives were dropped, Meyer turned his attention to U.S. fan trips and steam operations overseas in locales such as China, Eastern Europe, and India.

Equally dramatic are Meyer’s close-up views of locomotives. He made about half his photos for modeling purposes and the other half for his own enjoyment.

“We just started taking pictures from any angle, doing what we thought was interesting and what might be required to build better models,” Meyer told Classic Trains magazine in its Spring 2003 issue. “I take a lot of detail pictures because railroad erection drawings do not show all the details.”

An electrical engineer who enjoyed a 40-year career at GM’s Electro-Motive Division, Meyer doesn’t see anything incongruous about working a new diesel-electrical units but taking photographs of steam.

“I have never regretted taking a picture.”