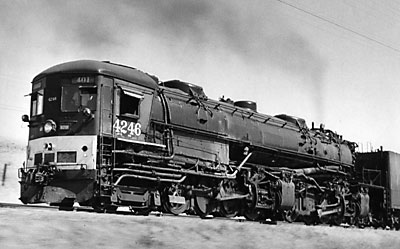 In 1928, the Northern Pacific went shopping for a locomotive that could eliminate doubleheading on the eastern end of its Yellowstone Division between Mandan, N.Dak., and Glendive, Mont. NP’s line through the Badlands had a series of long grades in both directions that made helpers impracticable and had long been one of the railroad’s operational headaches.

Together with Alco, NP set about designing a large simple articulated. The starting point was the 2-8-8-2, which quickly grew into a 2-8-8-4.

The NP burned coal from lineside mines in Montana, although it had only two-thirds the heat content of the bituminous coal used on other railroads. As a result, greater volumes of the low-quality coal had to be burned in order to generate the same amount of power. This, in turn, required a mammoth firebox, which needed the support of a four-wheel trailing truck, thereby creating the 2-8-8-4.

Initially, NP took delivery of one engine from Alco in 1928. A giant locomotive, its 715,000-pound weight made it the heaviest in the world until C&O’s Alleghenies and Union Pacific’s Big Boys burst on the scene.

After two years of testing, NP ordered eleven more in 1930 – but this time from Baldwin. The name Yellowstone was bestowed on the wheel arrangement in recognition of the railroad division over which the locomotive first operated.

While NP was testing its new locomotive, Southern Pacific was assessing the motive power situation on its 139-mile Sacramento Division between Reno, Nev., and Roseville, Calif. This was a heavy-duty mountain railroad with grades exceeding 2 percent that crested Donner Pass in the Sierra Nevadas at an elevation of 7,017 feet.

SP had been using oil-burning cab-forward 2-8-8-2 Mallets on the line since 1909. By the 1920s, however, it was clear that more modern power was needed. SP had started using 2-10-2s and 4-10-2s, which outperformed the Mallets, but the operating costs were high because of the need to double- and triplehead trains. Ten-coupled power did the job on Donner; it was just expensive.

Southern Pacific cab-forward 4-8-8-2 No. 4246, a 1942 Baldwin, races through western Nevada.
Robert Hale
Together with Baldwin, SP designed a simple articulated in the form of a 4-8-8-2 cab-forward – which placed the cab at the front of the locomotive in order to improve crew visibility and ventilation in the line’s multiple tunnels and snowsheds.

The locomotive, delivered in 1928, proved very successful, and SP bought a total of 195 engines over the next sixteen years. One locomotive could power a train across the Sacramento Division in sixteen hours, then the maximum on-duty crew time permitted under Hours of Service regulations.

Eventually, 4-8-8-2s could be found on all of the railroad’s main lines, from Oregon to West Texas. In addition to the oil-burning cab-forwards, SP also acquired twelve coal-burning 2-8-8-4s from Lima for use on its lines in New Mexico. 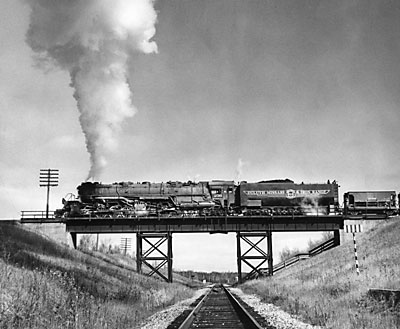 Duluth, Missabe & Iron Range 2-8-8-4 No. 236 hauls an empty ore train north out of Two Harbors, Minn. DM&IR’s Yellowstones were equipped with all-weather cabs and centipede tenders.
Franklin A. King
Two other railroads owned Yellowstones. Arguably the very best of the type were those of the Duluth, Missabe & Iron Range. This iron-ore hauler had been home to 2-8-8-2s and 2-10-2s, which were having trouble keeping the line fluid as World War II heated up.

In 1941, the railroad took delivery of eight massive Baldwin 2-8-8-4s to help cope with its traffic needs. These handsome engines, with all-weather cabs and centipede tenders, allowed the railroad to double its train sizes.

The smallest Yellowstones built went to the Baltimore & Ohio. During World War II, the railroad needed new power to ease the load on its lines west of Cumberland, Md., through the Allegheny Mountains.

B&O’s first choice would have been diesels, but War Production Board restrictions dictated otherwise. Consequently, the B&O turned to Baldwin for thirty new 2-8-8-4s, delivered in 1944 and 1945.

The B&O had a restricted loading gauge because of some tunnel clearances and, as a result, all prior 2-8-8-4s would have been too big. So Baldwin built the engines to an entirely new design.

B&O put its 2-8-8-4s to work on the Cumberland Division, then in the 1950s when diesels replaced steam in the mountains, reassigned the Yellowstones to Ohio where they hauled coal and ore trains to the Lake Erie ports of Lorain and Fairport Harbor.

Classified EM-1s, they were considered by many to be the B&O’s finest steam power.