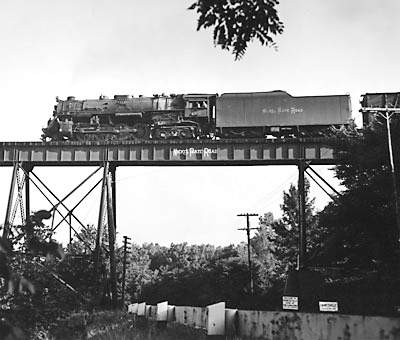 One of Nickel Plate’s handsome Berkshires leads a westward freight across the Grand River bridge in Painesville, Ohio. No. 802 was originally built for the Wheeling & Lake Erie in 1937, then went to work for the Nickel Plate Road in 1949 when the NKP leased the W&LE.
John A. Rehor
During the 1920s, America’s railroads began to face capacity constraints. A boom in traffic was causing main lines to choke.

The power of a steam locomotive is directly related to the ability of the boiler to evaporate water – the more the better. Evaporating large volumes of water requires a big firebox and grate. To generate more power, Lima envisioned a firebox so large it could not be supported by the two-wheel trailing truck of a 2-8-2, the favored freight engine of the time. The answer was to employ a four-wheel trailing truck. Lima did so, and created the first 2-8-4.

In February 1925, the new 2-8-4 completed a series of very successful trials on the Boston & Albany in the Berkshire Hills of western Massachusetts. It dramatically outperformed a two-year-old heavy 2-8-2. The B&A subsequently ordered 55 copies and the 2-8-4 got a name – Berkshire.

The prototype locomotive then successfully demonstrated on several more railroads, and Lima got orders from Boston & Maine, Illinois Central, and Missouri Pacific.

Early 2-8-4s had 63-inch driving wheels and, while they were powerful locomotives, they could not really be called fast freight engines. The first step toward increasing the Berkshire’s speed potential was taken by the Erie between 1927 and 1929, when it purchased 105 2-8-4s with 70-inch drivers and a larger boiler.

However, the most important milestone in the development of the 2-8-4 occurred in 1934 with the introduction of the first Nickel Plate Berkshire.

Both the Nickel Plate and Erie were owned by Cleveland’s Van Sweringen brothers, along with the Chesapeake & Ohio and Pere Marquette. All four railroads had a common design bureau known as the Advisory Mechanical Committee. It was the AMC that designed the Nickel Plate’s new Berkshires (and would later go on to design C&O’s 4-8-4s and 2-6-6-6s).

The AMC 2-8-4 was an extremely well balanced engine with a powerful boiler and ample cylinders, all mounted on a frame sporting 69-inch drivers. The resulting engine, with its 64,100 lbs. of tractive force, was a fast freighter, but one that could also get on its knees and lug.

After Alco delivered Nickel Plate’s first 2-8-4 in 1934, almost all new Berkshires were built to the AMC design. The Pere Marquette, C&O, Richmond, Fredericksburg & Potomac, Wheeling & Lake, and Virginian all bought AMC 2-8-4s, and L&N’s Berkshires were strongly influenced by the design. C&O, which would come to own the largest U.S. fleet of 2-8-4s, nicknamed them Kanawhas.

The Berkshire was in its element in high-speed freight service, and nowhere was this better demonstrated than on Nickel Plate’s main line between Buffalo and Chicago. As late as 1957 main-line freight on the NKP was 100 percent steam-powered, and it seemed as though the Berkshires would hold the diesel at bay forever.

Elsewhere however, the 2-8-4 was an easier prey – particularly the earlier engines with 63-inch drivers, all of which disappeared in the early 1950s. In the coal fields, Berkshires on the C&O, L&N, and Virginian quickly fell to the diesel. By the end of 1956, steam had been vanquished on all three roads.

The longest-lived engines were five lightweight “pocket” Berkshires built for the old Norfolk Southern Railroad in 1940. They were sold to the National Railways of Mexico in 1951 and several remained in service until 1963.