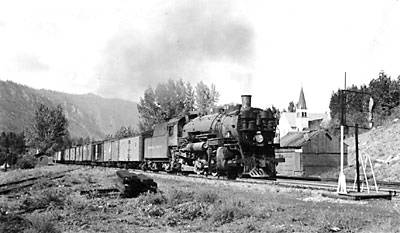 Northern Pacific had been using 2-6-2s on its main line in level terrain, and sought a locomotive that could handle the same-sized train in hilly territory without doubleheading.

Furthermore, NP’s mechanical department wanted an engine with the same adhesion as a heavy 2-8-0, but with more power. This required a bigger firebox than was possible with a Consolidation. Thus, a new eight-coupled engine was designed, boasting a large firebox that sat behind the rear driving wheels. The firebox was supported by a two-wheel trailing truck, thereby creating the 2-8-2 wheel arrangement.

Upon arrival, the new engines were put to work on the eastern end of NP’s Yellowstone Division, between Mandan, N.Dak., and Glendive, Mont., where they quickly showed their mettle. This 216-mile segment of Northern Pacific’s main line had a series of long 1.1 percent grades in both directions, and frequently served as the proving ground for new NP power. Indeed, the 4-8-4 and 2-8-8-4 locomotives were initially designed to work this piece of railroad, two decades after the 2-8-2s first steamed across the Badlands of North Dakota.

Northern Pacific eventually took delivery of 386 2-8-2s. The locomotives acquired the name Mikado because the first large-scale, main-line 2-8-2s were built by Baldwin in 1897 for use in Japan.

The Mikado was a very successful locomotive, and eventually more than 14,000 engines were built.

By 1920 it had become the standard freight engine in America, and it was continuously updated with new technology and modern appliances, including mechanical stokers, superheaters, combustion chambers, thermic syphons, feedwater heaters, modern outside radial valve gear, and more.

Baltimore & Ohio light Mikado No. 4500 was the first USRA locomotive built – emerging from Baldwin’s Eddystone, Pa., plant in July 1918.
Ralph G. Dunn collection
A key milestone in the evolution of the Mikado was the introduction of light and heavy versions of the 2-8-2, designed by the United States Railroad Administration during World War I. The locomotives were allocated to railroads in need of extra power to move wartime traffic.

More than 850 USRA 2-8-2s were built (625 light, 233 heavy), substantially more than any other USRA model, and their excellent design was replicated in locomotives built for years after railroads regained control of their systems in 1920.

The 2-8-2 remained a popular engine throughout the 1920s. During the decade, however, there was a general speed-up in freight schedules, and many railroads found they needed a faster and more powerful locomotive than the Mikado. The Mike had sufficient adhesion; it just couldn’t move a heavy train fast enough.

Previously, this fast freight role had been filled by the 4-8-2. But in the 1920s, an entirely new steam concept known as “Super-Power” was evolving, and the 2-8-4 and 4-8-4 soon began to displace the Mikado as the premier freight engine on many railroads.

The last Mikados were built in 1949, six narrow-gauge models delivered to Canada’s Newfoundland Railway. (Canadian Pacific received the last standard-gauge models a year earlier.) Many 2-8-2s soldiered on right to the end of steam. The last steam-powered run on the New York Central was handled by a 2-8-2 in May of 1957 – appropriate enough, since the Central rostered North America’s largest fleet of Mikados.