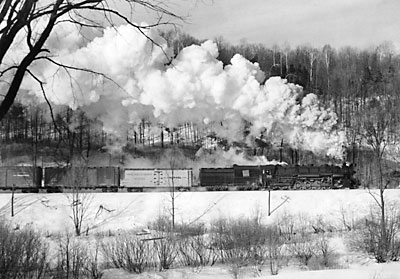 Central Vermont 2-10-4 No. 703 puts on quite a show rolling through Sudbury, Vt., with a northward freight in 1955.
Paul A. Reynolds
In 1925, just four months after demonstrating its new 2-8-4 on the Boston & Albany, Lima received an order from the Texas & Pacific for the first 2-10-4s. The ten engines ordered were essentially elongated versions of the 2-8-4 with an extra set of driving wheels.

The 2-10-4s were put to work on T&P’s roller coaster main line in west Texas, and thus became known as Texas types. The locomotives could haul 40 percent more tonnage, while using less fuel, than the 2-10-2s they replaced. T&P went back to Lima four more times, ordering an additional sixty locomotives from 1927 to 1929. 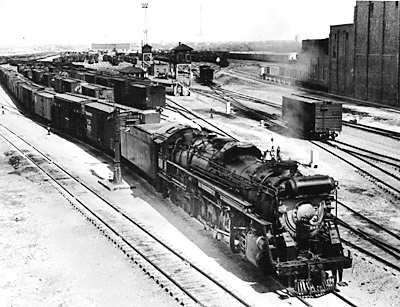 Texas & Pacific 2-10-4 No. 645 eases a freight out of Fort Worth’s Lancaster Yard in 1945.
Tom Stamey collection
The 2-10-4 had a more powerful boiler than the 2-10-2. Its four-wheel trailing truck could support a huge firebox with more than enough furnace volume to support very high rates of combustion.

However, with the exception of Central Vermont’s 60-inch drivers, all 2-10-4s built at that time rode on 63-inch driving wheels, and as a consequence, they suffered from the same balance problems as the 2-10-2. The Texans, like the Santa Fes, were limited to drag freight speeds.

Lima solved this problem in 1930 with forty new 2-10-4s built for the Chesapeake & Ohio. Their 69-inch driving wheels were big enough to hold the necessary counterweight so that the heavy reciprocating masses of the pistons and main rods could be properly balanced.

As a result, unlike other ten-coupled power, they were not speed-limited. C&O put its 2-10-4s to work hurrying 10,000-ton coal trains across the flat terrain of Ohio, from Russell, Ky., to Columbus, replacing the low-speed 2-8-8-2s used previously.

The engines performed extremely well on the C&O. So well, in fact, that during World War II, the Pennsylvania Railroad copied the design and built 125 locomotives of its own. Pennsy’s J1-class engines were the largest 2-10-4s ever built.

The locomotive’s next evolutionary milestone came in 1938. Previously, in 1930, the Santa Fe had ordered a single Texas with 69-inch drivers and a 300 psi boiler. The Great Depression stifled further orders, but an upturn in business near the end of the decade prompted the railroad to order ten new engines from Baldwin built to a novel design.

With a 310 psi boiler and 74-inch driving wheels, Santa Fe’s 2-10-4s were the most powerful two-cylinder steam locomotives ever built. Intended for high-speed heavy freight service, the engines represented the high point of 2-10-4 design.

Santa Fe received an additional twenty-five Texas types from Baldwin in 1944, giving the railroad a total of thirty-six. The engines settled in the territory east of Belen, N.M., and became the standard power on both freight and troop trains during World War II. With their 74-inch drivers, they could do a very credible job handling a heavy passenger train in New Mexico’s hilly terrain.

The last 2-10-4s built were six streamlined engines from Montreal Locomotive Works, delivered to the Canadian Pacific in 1949 for passenger service in the Canadian Rockies. They were also the last steam locomotives built for use in Canada.

By then, a total of 429 Texans had been delivered.

The arrival of the diesel locomotive spelled big trouble for the 2-10-4, as diesels were much better suited to handle the jobs in which Texas types were employed. By the mid-1950s most 2-10-4s had been retired.

The last of Santa Fe’s Texans worked as helpers out of Belen on a seasonal basis until 1957. Bessemer & Lake Erie sold several of its 2-10-4s to the Duluth Missabe & Iron Range, which ran them ran into the first half of 1959, the last Texas types to run.