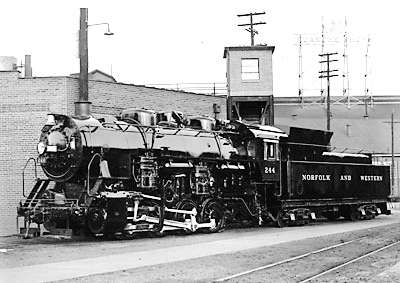 Norfolk & Western 0-8-0 switcher No. 244 holds the distinction of being the last U.S. reciprocating steam locomotive built for an American Class 1 railroad. It was the final steam engine to emerge from N&W’s Roanoke Shops, delivered to the railroad in December 1953.
Norfolk & Western
The first 0-8-0 was built in 1844 by Ross Winans for the Baltimore & Ohio. Winans subsequently built more than 200 such engines in his Baltimore shop, including 119 for the B&O alone. Perhaps the most famous of Winans’ engines was the Camel – likely the first camelback locomotive.

Having all the weight on its drivers, the 0-8-0 possessed the needed power that the 4-4-0 lacked. The 0-8-0 became the standard freight engine on the B&O for trains working the Allegheny Mountain grades.

Nevertheless, the 0-8-0 was strictly a low-speed road engine, for the same reasons as the 0-4-0 and 0-6-0 before it. The 0-8-0 worked best hauling freight in mountainous territory. It was unseated in the 1860s when the 2-8-0 appeared, which could move a train at a faster pace.

However, like the 0-4-0 and 0-6-0, the 0-8-0 later emerged as a switch engine. With the increased use of steel cars and the need to run longer trains, freight train weights in the first two decades of the 20th century grew beyond the capabilities of the 0-6-0, the standard yard engine of 1900. The 0-8-0, reincarnated as a switcher, provided the needed horsepower. 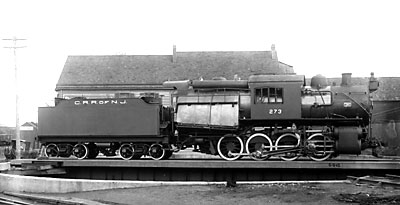 Central Railroad of New Jersey operated camelback 0-8-0 switchers – a locomotive configuration that placed the cab in the middle of the engine, next to the boiler and in front of the extra-wide firebox.
C. W. Witbeck
Since tractive effort at low speeds is mostly a function of axle loading, the 0-8-0 could exert as much heft in the yards as any eight-coupled road engine, and proved itself a stable riding engine. Its design was continually improved upon, inheriting many of the new design features and accessories accorded other modern steam power.

An important milestone in the engine’s development was the introduction of the United States Railroad Administration 0-8-0 in 1918, one of twelve standardized locomotive types built during World War I when railroads were under the control of the federal government. As with several other USRA locomotives, the 0-8-0 set new standards for design and performance, and a great majority of 0-8-0s built afterwards owed something to the USRA design.

Another important evolutionary step occurred with the introduction of 65 Chesapeake & Ohio 0-8-0s built by Alco in 1930. C&O’s design bureau created a bigger 0-8-0 than the USRA’s, with greater tractive effort, a higher boiler pressure, a better superheater, firebox siphons, and other improvements. C&O ordered 125 of the switchers for itself and subsidiary Pere Marquette. The Nickel Plate, which was also served by Chessie’s design bureau, ordered five from Lima in 1934.

Thirty of the newest C&O switchers, delivered in 1948, were sold to the Norfolk & Western in 1950. N&W made even more improvements to the engine, and built another 45 in its Roanoke Shops. Indeed, the very last steam locomotive built for service on a major American railroad was N&W 0-8-0 No. 244, delivered in December 1953.

A handful of railroads ordered three-cylinder 0-8-0s for heavy transfer service, while several railroads converted some of their older steam power into 0-8-0s. Delaware, Lackawanna & Western built sixty 0-8-0 switchers between 1929 and 1935 at its Scranton (Pa.) Shops (now the home of Steamtown), using the boilers and other parts from 38 Pacifics and 22 Mikados. Southern Pacific did likewise in 1930, building nineteen engines using the boilers of 4-4-2s and 2-6-6-2s.

The 0-8-0 never became as popular as the 0-6-0. By the time the 0-8-0 was resurrected as a switch engine, railroads had the option of using older road power such as the 2-8-0 in yard service, a practice adopted by many western roads.