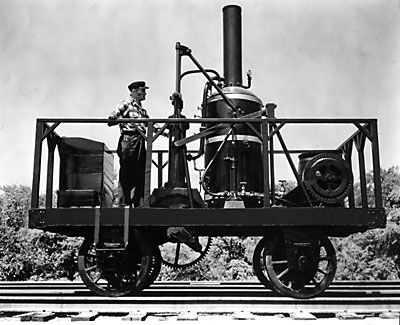 Baltimore & Ohio constructed this replica of the 0-4-0 Tom Thumb, its first steam locomotive. The original Tom Thumb was built in New York by inventor Peter Cooper, and made a successful first trip on August 25, 1830, when it pushed an open car hauling 18 passengers from Baltimore to Ellicott’s Mills. Early four-coupled locomotives with vertical boilers, such as the Tom Thumb’s, were known as Grasshoppers.
Baltimore & Ohio
The first locomotive in America came from England in 1829, an 0-4-0 built by Foster, Rastrick & Co. of Stourbridge, and named the Stourbridge Lion. Built for the Delaware & Hudson Canal Co., its intended use was to haul coal wagons on D&H’s gravity railroad between Carbondale and Honesdale, Pa. However, after only two trial runs, it became painfully evident that the seven-ton engine was too heavy for D&H’s track, and it was set aside. (An earlier experimental 0-4-0 steam locomotive had been built by Col. John Stevens in 1825, and run on a circular track in Hoboken, N.J.)

Lighter 0-4-0s that could manage the rickety track of America’s earliest railroads were quickly built for the D&H and other new lines. At first the engines came from England, but within a few short years America developed its own locomotive industry. Thereafter, domestic companies became the dominant suppliers to U.S. railroads.

These early engines were built with both vertical and horizontal boilers. Many of them, with names such as Tom Thumb, DeWitt Clinton, and Best Friend of Charleston became synonymous with American railroad history. 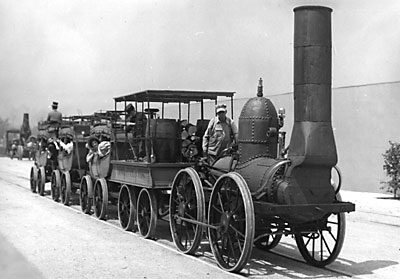 Mohawk & Hudson Railroad’s 0-4-0 DeWitt Clinton had a horizontal boiler, 54-inch cast-iron driving wheels, and weighed 3.5 tons. Built in 1831 by the West Point Foundry at a cost of $3,200, it was the first steam locomotive to haul passengers in New York state (Albany to Schenectady in August 1831). In 1948, owner New York Central brought it to the Railroad Fair pageant in Chicago.
Charles A. Brown
At first, almost any locomotive that could stay on the track and pull a few cars found work. But once trains started rolling on a regular basis, the railroads began to analyze their operations and quickly recognized the benefits of running trains at more than a snail’s pace.

This was a problem for the 0-4-0. It was an engine that needed good track – and good track was something in short supply.

The 0-4-0 had an unequalized suspension system that could not transfer weight from one wheel to another as the undulating track dipped or rose. Four pedestals attached to the locomotive frame independently supported the ends of each axle. On wobbly track, this was akin to placing a four-legged stool on uneven ground – it was unstable. Locomotive speeds had to be restricted to avoid derailments.

To overcome this drawback, the 4-2-0 and then 4-4-0, were developed. These locomotives employed a better suspension system that could handle the poor track at higher speeds. With their introduction in the late 1830s, the 0-4-0 was phased out as a road engine.

However, around 1870 the 0-4-0 reappeared, this time as a switch engine. These engines were newly designed locomotives, with horizontal boilers and an improved suspension system capable of handling irregular track. They readily found a home in railroad yards.

At the height of their popularity over 1,200 were in service.

As trains grew heavier, the 0-4-0 again lost favor to another engine with more power, the 0-6-0, which by the turn of the century had become the standard yard engine. While it could not compete with the 0-6-0 in tractive effort, the 0-4-0 was still very flexible and could accommodate tight curves and clearances. 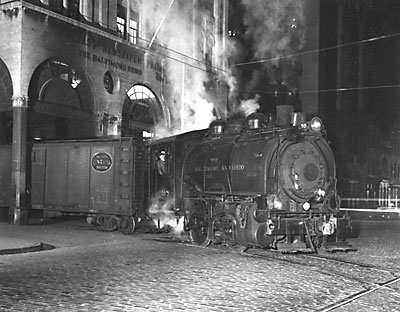 Fast-forward more than 100 years after the Tom Thumb first turned its wheels to B&O’s C16-class 0-4-0T No. 98, a tank engine built by Baldwin in 1912. This squat switcher worked the industries and docks of Baltimore until its retirement in December 1950.
Baltimore & Ohio
It was the ideal engine for switching cars on industrial spurs and waterfront docks. Throughout the 1940s, the Pennsylvania Railroad switched the harbor areas in Philadelphia with 0-4-0s. Reading’s camelback 0-4-0s also worked the Philadelphia waterfront. (One of the Reading engines still exists today on the Strasburg Railroad in Pennsylvania.) Baltimore & Ohio’s oil-burning 0-4-0T saddle-tankers patrolled Pratt Street and the docks in Baltimore.

Smaller locomotive builders such as Porter and Davenport built many 0-4-0 tank engines for short lines and for private industrial applications. Several of these locomotives lasted late into the diesel era.