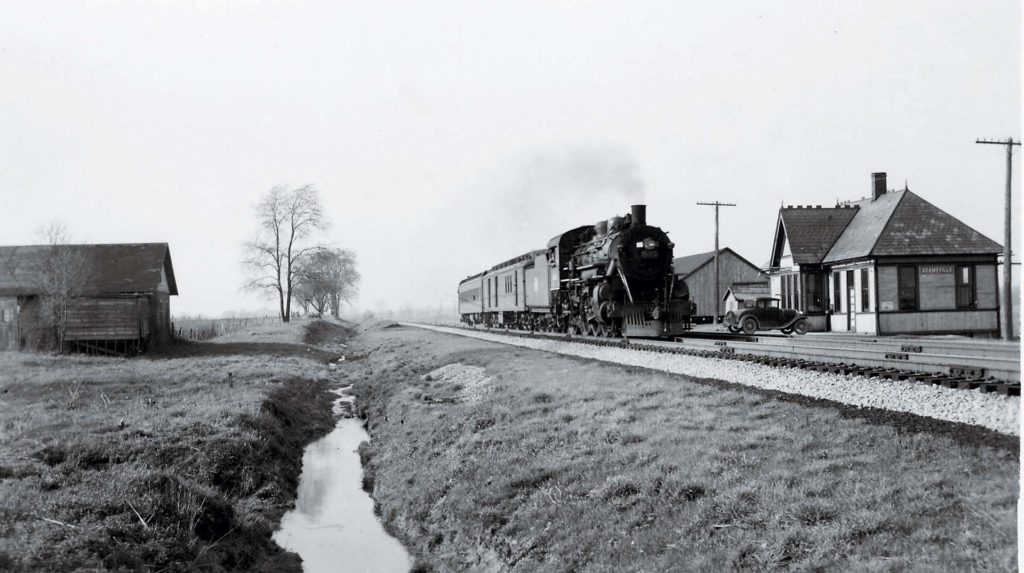 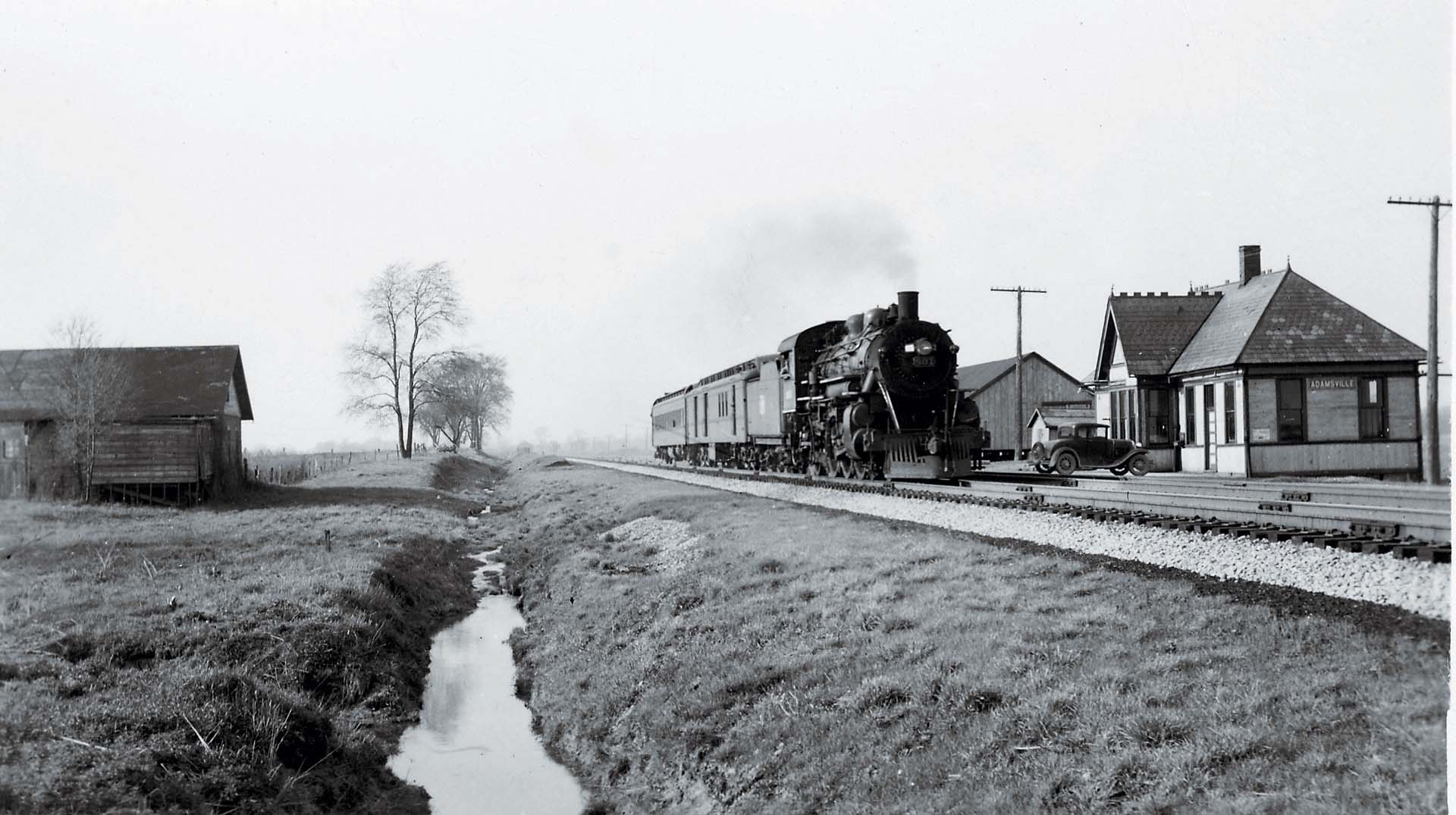 A B&LE Pacific with train 13 makes a stop at Adamsville, Pa., 9 miles from the end of its run at Greenville. Fred N. Houser photo
Several years ago, in 2001, Norfolk Southern completed a $26 million line change through Erie, Pa., ending 120 years of mainline operation down the center of 19th Street that had long involved a 15-mph speed limit. Back when this was the Nickel Plate Road, its high-speed freight trains, hauled by the legendary 2-8-4 Berkshires, were allowed a 60-mph top speed over much of the CTC-equipped, single-track route between Buffalo and Chicago. NKP’s four daily passenger trains, powered by Hudsons and later by Alco PA’s, could do 70. But all of them crawled along 19th Street at the same low speed.

West of the 19th Street running, NKP’s single-track main line, although on private right of way, was shared for 12.2 miles with tenant Bessemer & Lake Erie to Wallace Junction. This had been true since “the Bessemer” was first extended to Erie in 1891.

At its peak, B&LE had three daily passenger trains in and out of Erie, but by the 1930’s there remained but a single daily-except-Sunday local (trains 12 and 13) from Greenville, Pa., and a nightly freight. The B&LE also kept a switcher at Erie. Beginning in 1936 it was a 550 h.p. steeple-cab diesel built by Westinghouse, and later it was an Alco S4.

As NKP expanded its fleet of Berkshires between 1934 and ’49, it placed increasing emphasis on the fast freight service that their performance made possible. A special niche for NKP was meat traffic, most of which was interchanged with the Lackawanna at Buffalo. Not only was the speed limit for such trains a mile a minute, but management wanted them to be operated that way.

On the Bessemer, speed was a whole other story. Its double-track main line was the domain of some of the heaviest iron-ore and coal trains in the world. Grossing up to 16,000 tons, these monsters were limited to a top speed of 40 mph. B&LE also still had its pair of local passenger trains, powered by P-1 Pacifics built by Schenectady in 1913.

Employee timetables specified that these light 4-6-2’s be operated no faster than 55 mph. When new, they hauled scheduled weekend expresses between Pittsburgh and Conneaut Lake Park, Ohio, and also other excursion trains, but by the late 1940’s virtually all their assignments were on the locals. The 55-mph limit was adequate to assure on-time performance.

A problem developed as B&LE enginemen also observed the same 55-mph limit while on the Nickel Plate trackage, further complicated by a scheduled passenger stop at Fairview, 3 miles east of Wallace Junction. B&LE train 12 arrived at the junction at a very busy time for NKP’s main line.

Eastbound fast freight 52 was scheduled out of Conneaut (Ohio) yard, 14 miles west of Wallace Junction, at 8:35 a.m., followed 20 minutes later by fast freight 98 and then at 9:15 by NKP 6, the morning passenger train to Buffalo. This meant that eastbounds hit Wallace Junction at about 9 a.m. (NKP 52), 9:10 (B&LE 12), 9:20 (NKP 98), and 9:30 (NKP 6). Although NKP had two controlled intermediate sidings between those at Wallace Junction and Cascade, with this traffic density it had to be pretty much a one-speed railroad.

Nickel Plate dispatchers and crews became fed up with running on B&LE 12’s yellow blocks, so about 1950, the NKP operating department approached B&LE with a request that it look into raising the speed limit of its 4-6-2’s to 70 mph. Bessemer’s mechanical department soon approved the new limit (applicable only on NKP), and Nickel Plate became much more of a one-speed railroad in northwestern Pennsylvania. NKP’s Hudsons, PA’s, and Berkshires would no longer be slowed by B&LE’s little Pacifics.