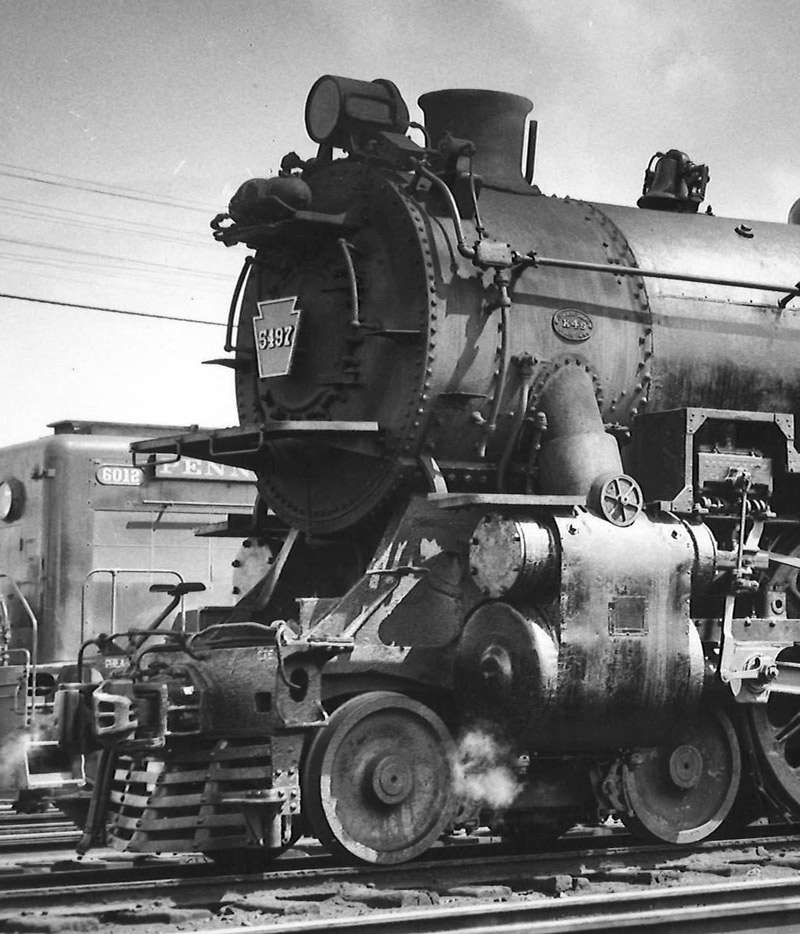 By the early 1920s, two features that would come to be seen as distinctly Pennsy — a visorless electric headlight mounted on a bracket projecting from the top of the smokebox, and a pilot formed of horizontal steel bars — had become standard. Both passenger and freight power carried round numberplates in this era. For a brief time, engines with bar pilots and oil headlights converted to electricity were common.

By the early 1920s, the relative autonomy that the system’s Lines West of Pittsburgh had long enjoyed had largely come to an end. Nevertheless, the Lines West penchant for headlights centered on the smokebox front — a placement favored by many roads but pointedly avoided on PRR — could be seen on K4’s into the mid-’20s, as in this September 26, 1925, view of No. 7288 at Newark, Ohio.

Engine 3681 exhibits the appearance many regard as the apex of K4 aesthetics: Bracket-mounted high headlight, keystone numberplate, and bar pilot. For good measure there’s a cab-signal box on the pilot deck — engines lacking that detail tend to look a bit naked there.

PRR jumped on the steam streamlining bandwagon in 1936 by engaging Raymond Loewy, who’d styled the GG1 electric the previous year, to give the K4 a modern look. The sheet-metal shrouding he devised carried the Belpaire firebox’s square top corners forward to house classification lights. Only one K4 — 1920-built No. 3768 — got this treatment, but the experimental S1 6-4-4-6 of 1939 wore an elongated version.

Loewy’s firm added to its PRR portfolio in 1940 with a design applied to four existing K4’s which were planned for use on three new streamliners: the South Wind, Trail Blazer, and Jeffersonian. Not quite the full cowling given to No. 3768, the treatment included a prominent drop-coupler pilot.

Retractable couplers served two functions: they enhanced the sleek appearance of streamlined locomotives, and their smooth contours helped deflect objects that the locomotive might strike. Several roads adopted them, some using designs in which the coupler swung upward when not in use. Beginning in 1939, PRR applied drop couplers to all new steam locomotives, streamlined and otherwise, and retrofitted them to hundreds of M1 4-8-2s and K4’s. Whatever their merits, aesthetically, they were an incongruous element on a traditional steam engine.

The late 1940s saw the final alternation to the K4’s front end: the reversal of the positions of the headlight and turbogenerator, in concert with a platform for workers to stand on while attending to those items. This arrangement emphasized functionality over appearance. Some K4’s, including those like No. 5497 with one-piece cast frames, got the facial treatment but retained their bar pilots.

Most K4’s in service during the final few years of PRR steam carried the full late ’40s “beauty treatment.” This includes the two selected for preservation: No. 3750 (now at the Railroad Museum of Pennsylvania) and Altoona’s No. 1361 (pictured at Bay Head, N.J., in 1955). As such, they convey the image of a company — the Pennsylvania Railroad — and a technology — steam locomotion — that were past their prime.

The recent announcement of a fresh start in the long effort to restore the Altoona Railroaders Memorial Museum’s class K4s steam locomotive No. 1361 is great news for Pennsylvania Railroad fans. More than any other locomotive, the K4 was the face of the steam-era PRR. For 40 years, the Pacific types could be found on locals and limiteds from one end of the vast system to the other. The class’s long service life is a testament to the inherent soundness of the K4 design.

Nevertheless, the 4-6-2s underwent modifications over the years. Nowhere was this more apparent than in the engines’ front ends. The first K4 of 1914 bore traces of the elegance characteristic of 19th century locomotives. By the time the class was retired in 1957, the appearance of the few survivors owed nothing to aesthetic considerations.