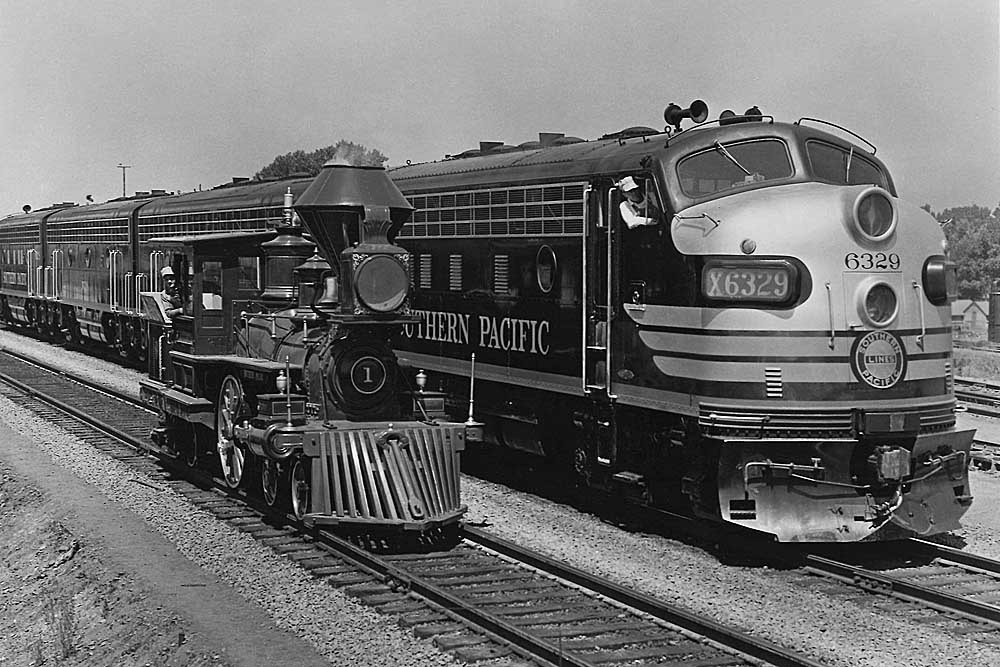 The Southern Pacific resorted to a most unique design to save its engine crews from asphyxiation in long tunnels: articulated steam locomotives with the cabs at the front. The railroad would roster 195 of the basic 4-8-8-2 design in the AC-4 through AC-8 and AC-10 through AC-12 classes. No. 4211, an AC-10 class locomotive, is shown in its builder’s photo. Sister AC-12 No. 4294 is preserved at the California State Railroad Museum in Sacramento. Southern Pacific photo

GS-4 No. 4451 rests at Los Angeles after a run from San Francisco in the 1940s. Painted orange, red, and black, locomotives came to symbolize the Southern Pacific on the California coast. H.D. Bonham photo

EMD SD9 No. 5402 shows off a special light package applied to Southern Pacific locomotives. They contained a conventional headlight, gyroscopic headlight, and red light that turned on during an emergency brake application. It was built in March 1950. Al Kamm photo

The original EMD DD35 double diesel was a cabless model intended to mate with the GP35. They were equipped with four-axle trucks and 567D3A prime movers. Southern Pacific locomotives included three, built as Nos. 8400-8402 in 1964. Union Pacific also had 27, along with 15 cab-equipped DD35A units. Classic Trains collection

SW1200 No. 2287 at Eugene, Ore., in September 1979 shows how the light package was applied to Southern Pacific switchers.

Classic Trains editors are celebrating the history, heritage, and style of the Southern Pacific Lines all through February 2022. So, please enjoy this photo gallery of Southern Pacific locomotives selected from the archives of Kalmbach Media’s David P. Morgan Library.

Southern Pacific locomotives were among the most distinctive in North America. The SP was one of the only large railroads that did not acquire steam locomotives of USRA design. It also applied a trademark light package to its diesels, making them stand out on the secondhand market to this day.