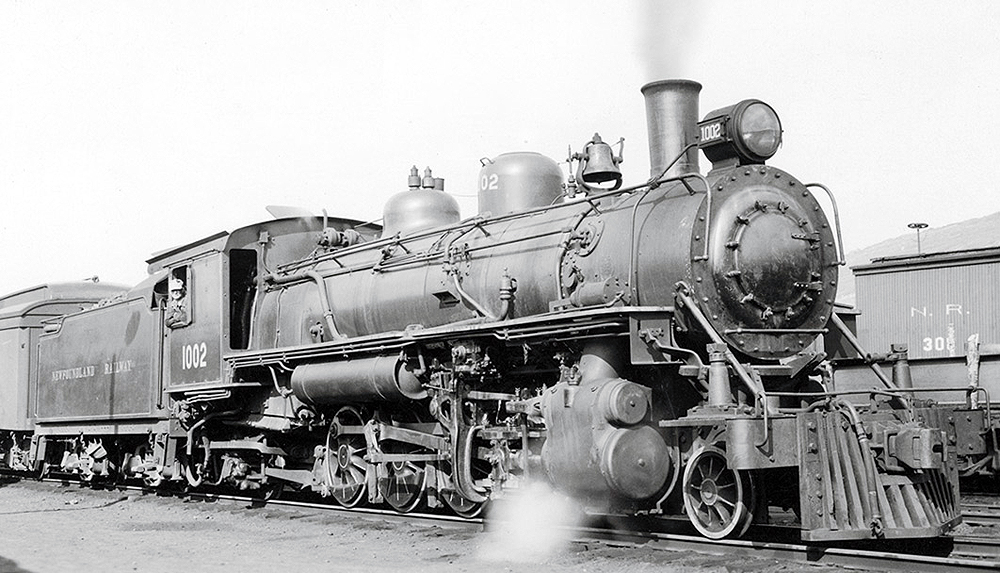 History of the Newfoundland Railway

When Canadian National closed its rail operations on the island of Newfoundland — the former Newfoundland Railway — in October 1988, it marked the end of common-carrier narrow-gauge railroading in North America. Although other properties have survived or been resurrected as operating museums or tourist lines — think East Broad Top, White Pass & Yukon and, of course, two in Colorado — none labored as long into the 20th century doing the day-to-day work envisioned by its builders.

How did CN’s far-flung system come to include an island narrow-gauge? The answer, like the line itself across Newfoundland, is long and full of curves.

Rails come slowly to the island

Most Newfoundlanders lived by the coast, and until the late 19th century virtually all their transport needs were met by marine vessels. Nothing came of an 1840s proposal for a railway along the island’s south shore, intended to speed the North American end of the emerging transatlantic steamship trade. Four decades passed before the first rails were laid, ultimately forsaking the shore for an indirect route linking St. John’s and Port aux Basques — 350 miles apart as the gull flies — with 547 miles of meandering 42-inch-gauge track.

Since Newfoundland’s commerce and politics were concentrated in the capital of St. John’s, it was designated the eastern terminus of the railway, which was chartered in 1881. By 1882, 30 miles of track were in place west to Holyrood, the choice of gauge reflecting British Colonial tradition.

Financial problems dogged the builders, and the railway came under government control in 1884, when operations began on the Avalon Peninsula. By the time the cross-island main line was finished by contractor Robert Gillespie Reid in 1897 — his 1890 arrival having brought much-improved methods and standards — a patchwork of companies had been united as the Newfoundland Railway, the name on the 1881 charter. Reid’s efforts earned his firm, in 1893, a 10-year contract to operate and manage the line. This was expanded to 50 years in 1898; following contract amendments in 1901, the Newfoundland Railway was reconstituted as part of the Reid-Newfoundland Co., controlled after Reid’s death in 1908 by his three sons.

On June 30, 1898, Port aux Basques welcomed the first official train to cross the island, inaugurating rail and connecting steamship operations to mainland Nova Scotia that would evolve for nine decades. Having profited from the line’s completion, and despite their contractual near-monopoly in island transport, the Reids were unable to turn a profit on their railway and steamship operations. The firm’s ensuing appetite for financial concessions led to mutual termination of the 50-year pact in 1923. After operating briefly as Newfoundland Government Railway, it became Newfoundland Railway again in 1926.

A flurry of branchline construction during 1909–15 gave the railway almost 1,000 route-miles; this dropped to 700 in the 1930s, most reductions occurring on the Avalon Peninsula. Branches to Carbonear, Placentia/Argentia, Bonavista, and Lewisporte remained.

Newfoundland played a pivotal role in World War II during the Battle of the Atlantic and as a staging point for ship convoys and aircraft movements. Construction of Allied bases and the associated movement of personnel resulted in a railway traffic surge. A British and Canadian airfield grew near the main line at Gander, and the United States also exploited Newfoundland’s relative proximity to Europe. The two largest American installations were a naval base at Argentia — site of the 1941 shipboard meeting between President Roosevelt and Prime Minister Churchill — and Harmon Field, an Air Force base on the west coast at Stephenville. Rail traffic was a barometer of wartime pressures; between 1941 and 1943, NR’s passenger count rose from 223,000 to 500,000; freight tonnage also doubled. So important was the line to American military interests that the U.S. government allocated $2 million of “lend-lease” funds for locomotive and car construction.

Although the war brought profits and a revitalized equipment roster, the railway was not immune from the conflict’s brutality. On October 14, 1942, the Port aux Basques–North Sydney (N.S.) ferry Caribou was torpedoed and sunk by a German submarine. Of 237 passengers and crew on board, 136 perished.

Newfoundland’s 1949 entry into Canada saw responsibility for much of the transport infrastructure assumed by the Canadian government, whose Canadian National Railways was charged with the management and operation of the railway, as well as coastal steamship services and the ferry link to Nova Scotia. The federal government agreed to subsidize the operations. Despite wartime profits and some postwar rebounds, though, the railway had been and would continue to be a chronic money-loser.

Newfoundland Railway was exclusively steam-powered for all but the final seven months of its pre-Confederation existence, as GE 47-ton center-cab diesels 5000–5002 arrived in August 1948. The last new NR locomotives were class R-2-d Mikados 324–329, built by Montreal and delivered just weeks before Confederation. They became the youngest steam locomotives, by five years, on the entire CNR. In all, four 4-6-0s, a 2-8-0, 10 4-6-2s, and 30 2-8-2s were conveyed to CN.

Well into the 1960s, the railway provided the only land link spanning Newfoundland. When the first road across the island opened as part of the Trans-Canada Highway in late 1965, it triggered an irreversible shift of traffic off the railway. In the highway’s first 15 years, the percentage of island freight handled by train dropped by more than half. More than 24 hours — double the road time — was required for the St. John’s–Port aux Basques rail trip, and that was if the trains ran on time, a spotty prospect especially in winter.

Passengers benefitted from CN’s continued investment in rolling stock, although the non-air-conditioned fleet couldn’t provide mainland comfort levels. The principal pre-Confederation passenger train was the overnight Overland Limited. CN renamed it Caribou in 1950, a fitting tribute to the ferry lost in 1942. To most folks, though, the train was known from the war onward as the “Newfie Bullet,” a wry reference to its leisurely schedule (daily in summer, triweekly the rest of the year). Although CN buses replaced the “Bullet” in July 1969, mixed trains kept serving isolated mainline points and the Carbonear, Bonavista, and Argentia branches.

From the time of NR’s completion, moving freight to the island entailed unloading mainland cars at North Sydney, N.S., “break-bulk” forwarding 100 miles by ship across the Cabot Strait, and reloading into narrow-gauge cars at Port aux Basques. In 1967, CN introduced a carferry operation which, with new standard- and dual-gauge trackage at Port aux Basques, permitted more efficient transfer. Thereafter, a standard-gauge CN switcher was assigned to Port aux Basques. By 1969, this had evolved to the temporary re-trucking of CN mainland cars (and the occasional off-line car), which were jacked up and fitted with 42-inch-gauge trucks; cars were reunited with their original trucks back in Port aux Basques. Some CN freight cars from the mainland were permanently re-trucked for captive service.

In late 1979, underscoring a new emphasis on intermodal traffic, Canadian National recast its Newfoundland operation as Terra Transport (TT). Derived from the province’s Latin name, Terra Nova, the new brand included a twin-arrow logo and bright green paint on containers and road vehicles. Diesels and rolling stock blended their post-1961 CN colors with the TT logo, but the new image couldn’t mask the findings of a 1979 federal inquiry document forecasting the railway’s extinction. A Newfoundland Transportation Initiative in 1988, backed by almost $1 billion in government money over 15 years, sacrificed the railway in favor of intermodal traffic using enhanced port and highway facilities.

By September 1988, Terra Transport had all but quit its rail operations, ready to follow its two 42-inch-gauge shortline connections — the Buchans Railway and Grand Falls Central — into oblivion. Most of the railway’s traffic was already in containers, and in mid-summer these were diverted to trucks or carried by ship directly from the mainland to St. John’s, Corner Brook, and smaller ports. The final TT revenue train arrived Bishops Falls from Corner Brook on October 1, 1988, and removal of the main line commenced on October 12.

Although more than 70 pieces of narrow-gauge stock (a 4-6-2, diesels, cabooses, coaches) are preserved in 20 locations, most operable items on hand at closure migrated to Latin America. The Trinity Loop, an engineering feat on the Bonavista branch, also was preserved. During the 1950s, CNR made no secret that only it “Served All Ten Provinces.” But no more. Railroading, and a way of life, had ended on the island of Newfoundland.