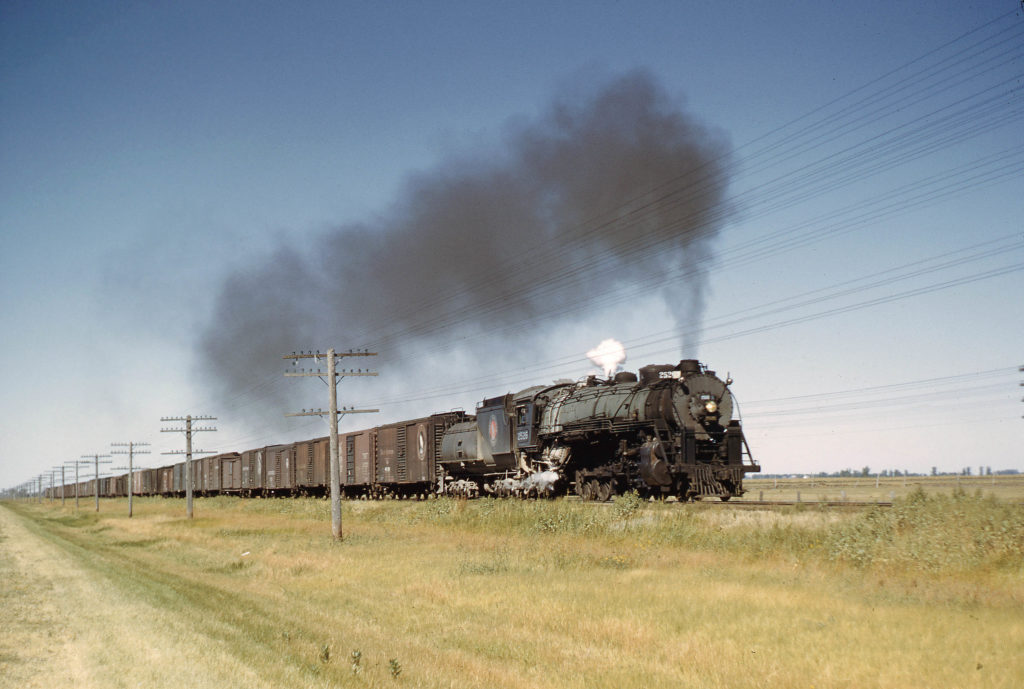 Great Northern 4-8-2 No. 2526, with white extra flags posted, rolls a long string of red boxcars across the Minnesota prairie around 1950. The class P-2 locomotive was built by Baldwin in 1923.

When Great Northern re-equipped its Empire Builder in 1951, only four years after the first sets of the train’s green-and-orange streamlined equipment entered service, the 1947 equipment became the Western Star, which is shown in Glacier National Park.

A new General Electric U33C in the Big Sky Blue scheme GN adopted in 1967 is paired with a couple of F units as it leads a freight through Index, Washington, in June 1969.

Great Northern spanned from Lake Superior to Puget Sound. The many branches off the main line in North Dakota were for gathering grain shipments.

For financial reasons the railroads were reorganized as the First Division of the St. Paul & Pacific. Both StP&P companies were soon in receivership, and Northern Pacific, with which the StP&P was allied, went bankrupt in the Panic of 1873.

In 1878 James J. Hill and an associate, George Stephen, acquired the two St. Paul & Pacific companies and reorganized them as the St. Paul, Minneapolis & Manitoba Railway (“the Manitoba”). By 1885 the company had 1,470 miles of railroad and extended west to Devils Lake, North Dakota. In 1886 Hill organized the Montana Central Railway to build from Great Falls, Montana, through Helena to Butte, and in 1888 the line was opened, creating in conjunction with the StPM&M a railroad from St. Paul to Butte.

In 1881 Hill took over the 1856 charter of the Minneapolis & St. Cloud Railroad. He first used its franchises to build the Eastern Railway of Minnesota from Hinckley, Minnesota, to Superior, Wisconsin, and Duluth. Its charter was liberal enough that he chose it as the vehicle for his line to the Pacific. He renamed the road the Great Northern Railway; it then leased the Manitoba and assumed its operation.

Over the mountains to Puget Sound

Hill decided to extend his railroad from Havre, Montana, west to the Pacific, specifically to Puget Sound at Seattle. He had briefly considered building to Portland, but it was already served by the Oregon-Washington Railroad & Navigation Co. and the Northern Pacific.

Hill’s surveyors found an easy route through the Rockies over Marias Pass. Later there was considerable advocacy for creating a national park in the Rockies of northern Montana, and GN — in particular, Louis W. Hill, son of James J. and president of GN 1907–12 and 1914–19 — joined the forces urging the establishment of Glacier National Park. Great Northern developed the park, and for many years furnished the only transportation to it. The park, in turn, drew passengers to the railroad-owned hotels and provided GN with a herald, a Rocky Mountain goat (actually a species of antelope). GN sold its Glacier Park hotel properties in 1960.

The Cascade Range in the state of Washington was a far more formidable barrier. The Northern Pacific had originally detoured to the south, using Oregon-Washington rails along the Columbia River. Hill, however, saw the vast stands of timber on the slopes of the mountains as a resource, and his engineer, John Stevens, found a pass (it now bears his name) that could afford a route from the interior of Washington to the tidewater of Puget Sound.

The Great Northern was opened through to Seattle in 1893 using a temporary line over Stevens Pass. In 1900 the first Cascade Tunnel, 2.63 miles long, provided relief from the switchbacks and the 4 percent grades of the temporary line and lowered the summit of the line from 4,068 feet to 3,383 feet.

The tunnel was electrified with a two-wire, three-phase system in 1909. The electrification was replaced with a more conventional system in 1927 as a prelude to the opening of the 7.79-mile second Cascade Tunnel in 1929. The new tunnel, the longest in the Western Hemisphere, lowered the maximum elevation of the line to 2,881 feet and eliminated 8 miles of snowsheds and more than five complete circles of curvature. The tunnel project included other line relocations in the area and the extension of the electrified portion of the line east to Wenatchee and west to Skykomish.

Even before completion of the route from St. Paul, the Great Northern opened a line along the shore of Puget Sound between Seattle and Vancouver, British Columbia, in 1891. In the years that followed, Hill pushed a number of lines north across the international boundary into the mining area of southern British Columbia in a running battle with Canadian Pacific. In 1912 GN traded its line along the Fraser River east of Vancouver to Canadian Northern for trackage rights into Winnipeg.

In 1907 the Great Northern purchased the properties and assets of the St. Paul, Minneapolis & Manitoba and of a number of its proprietary companies, such as the Eastern Railway of Minnesota and the Montana Central. In 1928 there was another spate of such activity. The result was that GN was a large railroad with very few subsidiaries, unlike, for example, the Southern Railway.

Among the major branches and lines added to the system were the Surrey Cutoff between Fargo and Minot, North Dakota (opened in 1912), which shortened the route between St. Paul and Seattle by about 50 miles.

Another acquisition was an interurban system, the Spokane, Coeur d’Alene & Palouse, which ran east and south from Spokane. This line was absorbed by GN in 1943.

Another addition was an extension of the Oregon Trunk from Bend, Oregon, south to a connection with the Western Pacific at Bieber, California, completed in 1931 (from Chemult to Klamath Falls, Oregon, on Southern Pacific rails).

GN changed little in the modern era — from the 1920s through the 1960s — apart from the industry-wide change from steam to diesel. A ventilating system allowed dieselization of the Cascade Tunnel in 1956 and eliminated the electrification. In November 1970 the Cascade Tunnel acquired a rival, the Flathead Tunnel, shorter by only 70 yards, as part of a line relocation necessitated by construction of a dam at Libby, Montana. Most of the construction was done by GN; only the last portion and the actual opening of the tunnel were done by Burlington Northern.

On July 1, 1901, the Great Northern and the Northern Pacific jointly purchased more than 97 percent of the stock of the Chicago, Burlington & Quincy to ensure a connection between St. Paul and Chicago. GN and NP backed construction of the Spokane, Portland & Seattle Railway from Spokane, Washington, to Portland, Oregon. SP&S, in turn, sponsored the construction of the Oregon Trunk Railway from Wishram, Wash., on the Columbia River, south to Bend, Ore. GN got another route to Portland by acquiring trackage rights on Northern Pacific from Seattle.

Hill soon acquired control of Northern Pacific with the intent of merging GN, NP, Burlington, and SP&S into a single railroad. As a start, he formed Northern Securities as a holding company, but the Interstate Commerce Commission quickly ruled against such a merger.