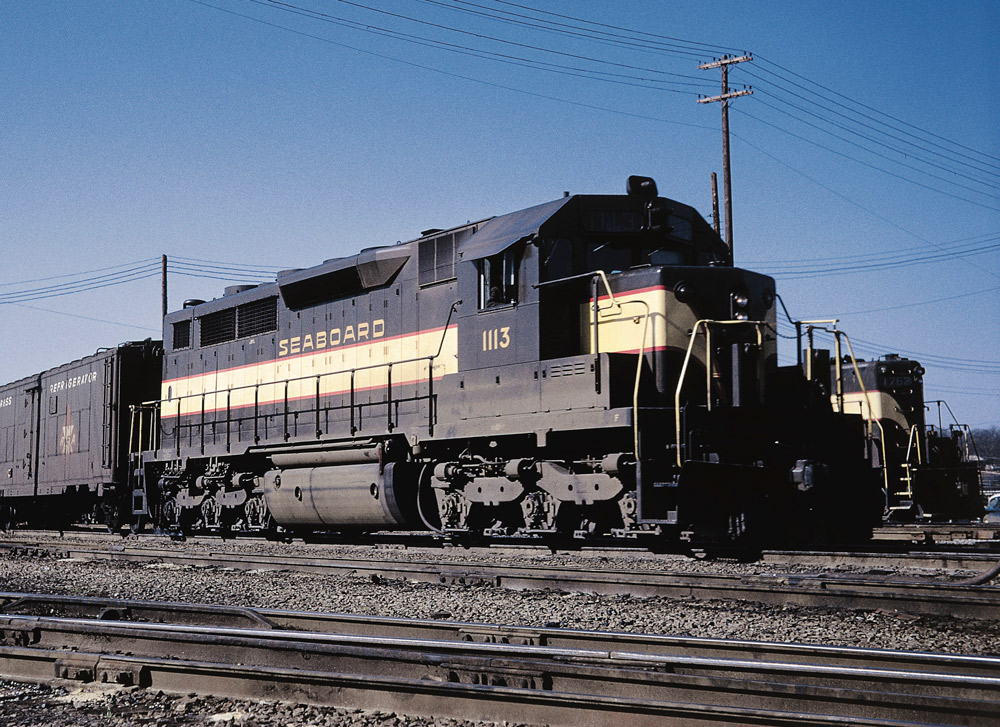 By a wide margin, Seaboard had more Q-3 Mikados than any other class of steam locomotives. The road acquired 117 from Alco and Baldwin beginning in 1923. With characteristic pumps on the smokebox front, No. 439 stands at Portsmouth, Virginia, on November 22, 1941.

The first of the Seaboard’s 70 Pacifics, the 20 members of class P, arrived during 1911–13. In 1940 the road streamlined two, Nos 865 and 868, for use on the Wildwood–Tampa/St. Petersburg section of the Silver Meteor. They wore the striking “citrus” scheme introduced two years earlier by the E4 diesels.

In the mid-1960s, Seaboard’s still-robust passenger service led it to acquire new power for its varnish in the form of 10 SDP35 road-switchers. They were painted in SAL’s freight scheme, and enjoyed long careers hauling tonnage after 1971. No. 1113 is at Raleigh in March 1966.

Seaboard “Russian Decapod” 549 stands at Durham, North Carolina, with mixed train 212 for Henderson on May 4, 1950. It’s one of 200 light 2-10-0s built for service on the Russian state railways but stranded stateside by the 1917 Communist revolution, then parceled out to various railroads by the U.S. Railroad Administration.

In 1938–39 Electro-Motive built 14 E4A and 7 E4B units for Seaboard’s top passenger trains like the Orange Blossom Special and Silver Meteor. SAL had the only E4’s, which differed from the contemporary E3, E5, and E6 in having special retractable nose doors that enabled safe passage from a rearward-facing A unit into the train coupled behind it.

The last word in Seaboard steam power was the 2-6-6-4. Baldwin built 10 of them in 1935 (class R) and 1937 (R-1) for fast freight service. Only SAL, Pittsburgh & West Virginia, and Norfolk & Western fielded this wheel arrangement.

A footnote to Seaboard locomotive history was 0-4-0T No. 1001. For six years after the road ended general steam usage in 1952, the 1936 oil-burner worked severely curved industry trackage at Columbus, Georgia, finally being retired in June 1958.