The Atchison, Topeka & Santa Fe is Classic Trains' Railroad of the Month for May 2020 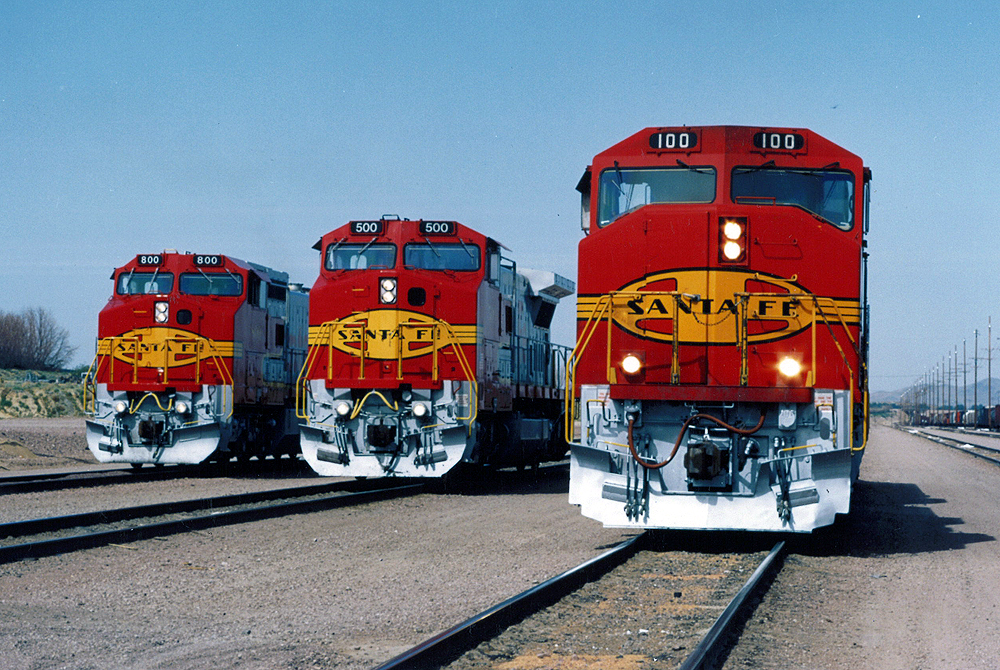 The 100% dieselized Santa Fe has spruced up Prairie-type 2-6-2 No. 1010 and sent her to San Bernardino, California, for movie and television work in connection with the 50th anniversary of the running of Death Valley Scotty's Special in 1905. No. 1010 is the only engine that pulled the original Scotty's Special that still remains on Santa Fe's rapidly declining steam roster. Note the old-style horizontal bar pilot and coal pile on tender — this is an oil burner.
Stan Kistler

Santa Fe Northern-type 4-8-4 No. 3751 pulls the San Diegan through Rose Canyon in California in 1953. The locomotive, now owned and operated by the San Bernardino Railroad Historical Society, was retired in August 1953.
Bill Plunkett collection

Santa Fe F units lead eastbound train 18 through Fort Madison, Iowa, in this undated photo. In the park next to the main line is 4-8-4 Northern-type No. 2913, built by Baldwin Locomotive Works in the early 1940s. Lead locomotive Electro-Motive Division F3 No. 36C was delivered in the late 1940s.
Walter A. Peters, J. David Ingles collection

This is the American Locomotive Company's new 6,000-hp diesel-electric locomotive set built for the Atchison, Topeka & Santa Fe Railway. The three-unit Alco-GE locomotive set weights 450 tons and is capable of 120 mph. Alco also said in its photo caption that the locomotive would be on display in New York City at the Waldorf-Astoria Hotel's private siding in 1943.
Jacob Lofman, PIX Inc.; ALCO publicity department

Santa Fe No. 50, an American Locomotive Company DL109, pauses at Lawrence, Kansas, in September 1950. The railroad had just two such locomotives, a A unit and a cabless B unit, delivered by Alco in 1941. An Electro-Motive Division cabless E unit is also in the train's consist.
R.P. Olmsted

This 3,600-hp Electro-Motive Corp. E1 diesel-electric passenger locomotive, built in 1938, is used in regular high-speed transcontinental passenger service between Chicago and Los Angeles on the Super Chief, Chief, or El Capitan streamliners of the Santa Fe Railway. The railroad had 11 such locomotives, eight A units and three cables B units, built by EMC in 1937-1938. They were rebuilt as E8m units by then-Electro-Motive Division in 1952-1953.
Santa Fe Railway

Santa Fe F7 no. 312L (right) leads Amtrak/Santa Fe Train No. 4 the Super Chief/El Capitan past an eastbound freight headed up by GE U36C No. 8706 at Winslow, Arizona, in 1972. The U36 was the first new locomotive to emerge in Santa Fe's new blue-and-yellow freight locomotive paint scheme.
Joe McMillan

Santa Fe U28CG No. 352 appears with two mates in August 1966 backing into Chicago's Dearborn Station for the Texas Chief. The railroad had 10 such locomotive, which later carried the 7900-7909 number series. They were built by General Electric in 1966 and later saw freight service after the railroad handed its passenger operations to Amtrak in 1971.
Burdell Bulgrin

The early members of Santa Fe's CF7 fleet of home-made road switchers were returning to the Cleburne, Texas, shops for repairs in this 1979 photo taken in Temple, Texas. The old control stands and air brake equipment were being replaced with a then-new standard design console nicknamed the "Hollywood control stand", the cab sides were to be changed to a typical GP-style sliding window version, a new taller front window was to be installed in front of the engineer, and the roof was raised to accommodate an air conditioner.
Jim Hediger

Three modern Santa Fe locomotives line up for an apparent publicity photo. Left to right are General Electric C40-8W No. 800, General Electric B40-8W No. 500, and Electro-Motive Division GP60M No. 100, all so-called "class units" – the lowest numbered locomotives for their respective models. No. 800 features a notched or "gull wing" cab design to clear New Mexico's York Canyon coal loader, a hallmark of later Santa Fe and Burlington Northern Santa Fe locomotives. The GP60s, exemplified by No. 100, ran in sets with cabless GP60B locomotives on fast intermodal trains, often mixed with the B40-8Ws. All three locomotives, delivered in the early 1990s, showcase the railroad's "Super Fleet" scheme, a throwback to its postwar passenger trains.
Classic Trains collection

Classic Trains editors are celebrating the heritage, history, and lore of famed (and infamous) railroads. In May 2020, we celebrate the Atchison, Topeka & Santa Fe Railway.

Please enjoy a collection of locomotive images located in the David P. Morgan Library archives at Kalmbach Media that include the Santa Fe’s iconic locomotives and classic scenic photos.

You might also enjoy this AT&SF history article from Classic Trains, a photo gallery of Santa Fe passenger trains, or freight trains.