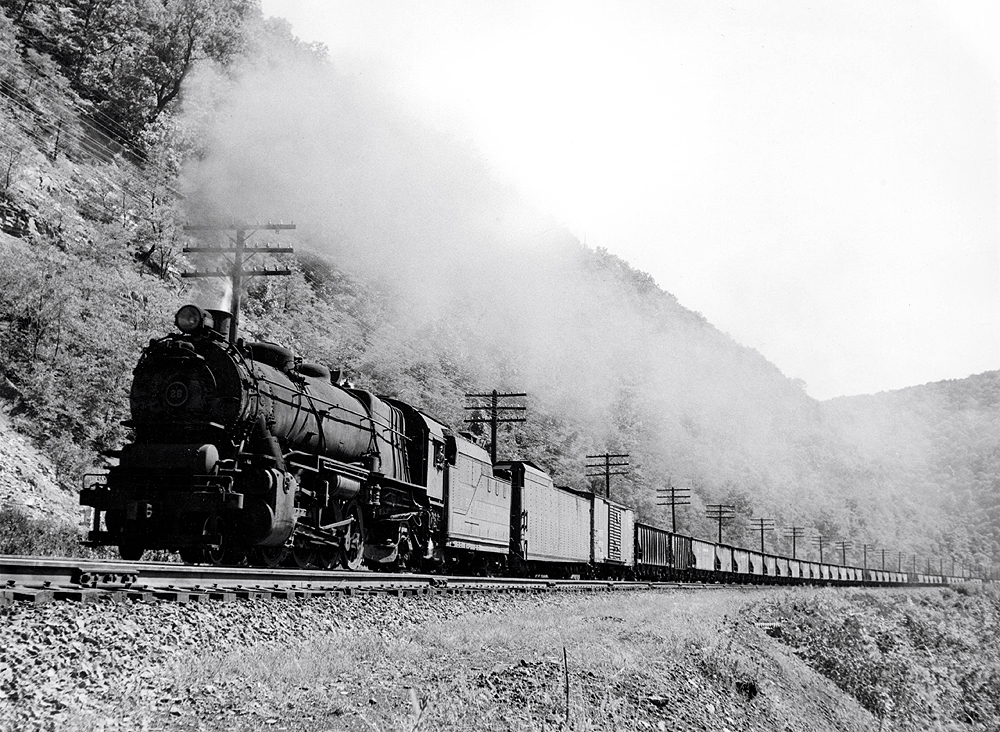 Steam on the brink of dieselization
L1s 2-8-2 Mikado No. 26 leads a train of empty coal hopper cars out of Renovo, Pennsylvania, toward Driftwood and the mines around Brady, in September 1955. Well on the way to dieselization by this time, the Pennsylvania had removed water stations from this part of the system, obliging the Mike to bring along an extra tender.
Philip R. Hastings

Duplex departing Chicago
Q2 4-4-6-4 duplex No. 6196 passes the interlocking tower and (hidden behind the train) passenger station at Englewood on the South Side of Chicago in the late 1940s. The Pennsylvania had 26 4-4-6-4 duplexes, built in 1944 and ’45 at its shops in Altoona, Pennsylvania.
Robert A. Caflisch

Under catenary in Virginia
A lone P5a box-cab electric approaches Potomac Yard in Alexandria, Virginia, with a freight from the north in June 1951. PRR’s 92 P5a motors, built in the early 1930s with a 2-C-2 wheel arrangement, came in a mix of box-cab and streamlined carbodies.
William E. Hopkins

Iron ore out of Cleveland
Three EMD F7s and a Fairbanks-Morse Erie-built assemble an iron ore train at Pennsy’s Whiskey Island dock in Cleveland, Ohio, in October 1961. Lake vessels brought the ore in for unloading by the Hulett machines in the background.
Herbert H. Harwood Jr.

TrucTrain crossing the Allegheny
In a rearward view from one of the three GP9s on the head end, TrucTrain TT-1 crosses the Allegheny River at Freeport, Pennsylvania, in September 1956. The hotshot carried piggyback trailers between North Jersey and Chicago.
Philip R. Hastings

Top of the Pennsy
Two eastbound freight trains move past AR Tower at Gallitzin, Pennsylvania, summit of the PRR’s crossing of Allegheny Mountain, in September 1956. Both trains have pushers, three EMD F3s on one, and a two-unit set of Baldwin “Centipedes” on the other. The two tracks for westbound trains are in the background.
Philip R. Hastings

Freight on the High Line
An H8 2-8-0 Consolidation moves a freight along the West Philadelphia Elevated, a.k.a. the “High Line,” in the 1910s or early ’20s. PRR built the High Line for through freights to bypass the tangle of tracks on the west bank of the Schuylkill River in Philadelphia.
Harold M. Lambert

Horseshoe Curve
A J1 2-10-4 heaves a freight upgrade on the famous Horseshoe Curve in the Allegheny Mountains 5 miles west of Altoona, Pennsylvania, in the late 1940s or early ’50s. The speed of the ascent is indicated by the column of smoke standing straight up.
Classic Trains collection

Hippo vs. Hippo
Two ponderous class I1 2-10-0 Decapods, nicknamed “Hippos” on the PRR, meet at a rural grade crossing along the road’s Elmira Branch near Troy, Pennsylvania, in May 1957. At left is a train of empty coal hoppers; at right is a local freight.
Jim Shaughnessy

Making for the Mountain
Boxcars follow a J1 2-10-4 through Slope interlocking on the edge of Altoona in 1949. Five miles ahead is the landmark Horseshoe Curve.
Linn H. Westcott

All this month — January 2020 — Classic Trains editors are celebrating the heritage, history, and images of the Pennsylvania Railroad.

Please enjoy this photo gallery of images from the David P. Morgan Library archives at Kalmbach Media that include Pennsy diesel- and steam-powered freight trains through time.

You might also enjoy this PRR history article from Classic Trains or a photo gallery of Pennsy passenger trains!