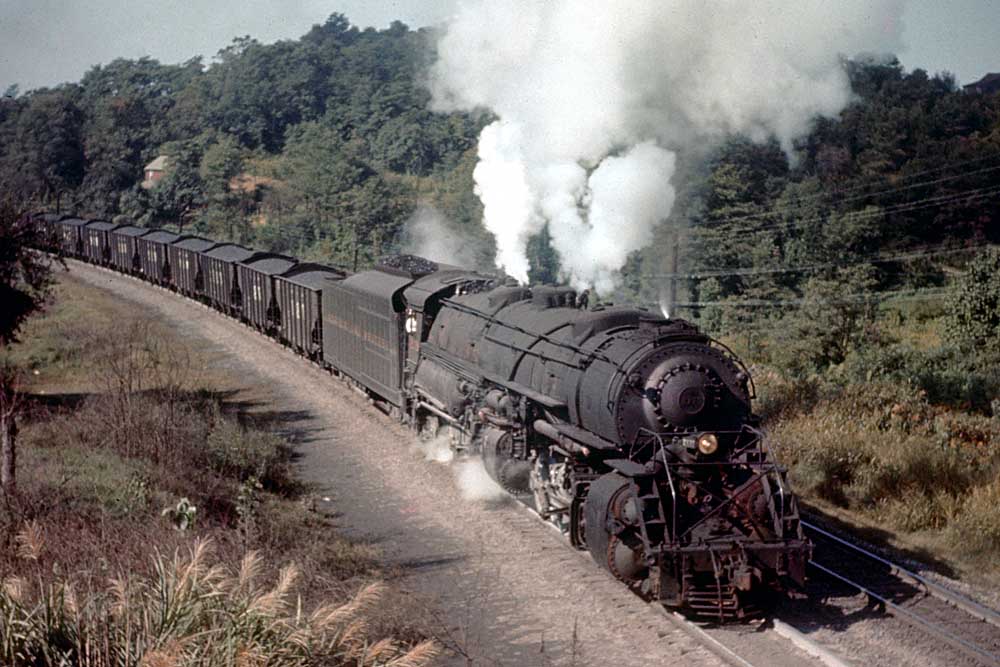 Norfolk & Western Railway history has two distinct phases. Before 1964, it was a coal hauler controlled by the Pennsylvania Railroad. It even looked like the Pennsy in places: Tuscan Red coaches, position-light signals, and a short electrified district — but no Belpaire fireboxes. In 1964, possibly as a reaction to the proposed merger of the Pennsylvania and the New York Central, N&W merged, leased, or purchased four other railroads. Suddenly, the N&W was a Midwestern railroad, with a multiplicity of routes from Buffalo to Chicago and St. Louis and terminals on the Missouri River at Kansas City and Omaha.

Norfolk & Western’s oldest ancestor was a line from Petersburg, Va., to City Point, a few miles away on the James River. In 1850, the Norfolk & Petersburg Railroad was chartered to build a railroad between the cities of its name. It reached Petersburg in 1858 after crossing part of the Dismal Swamp on a roadbed laid on a mat of trees and logs. Other N&W forebearers were the Southside Railroad, opened in 1854 from Petersburg to Lynchburg, Va., and the Virginia & Tennessee, completed in 1856 from Lynchburg to Bristol on the Virginia-Tennessee line.

Consolidation and a new name

The Norfolk & Petersburg, Southside, and Virginia & Tennessee were consolidated in 1867 but retained their identities until 1870, when they were organized as the Atlantic, Mississippi & Ohio Railroad.

The AM&O was sold in 1881 to the Clark family, who ran a banking house in Philadelphia and owned the Shenandoah Valley Railroad. The Clarks moved the headquarters of their railroads to a place called Big Lick. The place was soon renamed Roanoke, and the AM&O was renamed the Norfolk & Western Railroad.

The N&W was extended northwest into the coal fields of West Virginia, and in 1890, it began building an extension to the Ohio River. It reached the river in 1892 and bridged it to connect with the Scioto Valley & New England Railroad, which ran north to Columbus, Ohio.

Purchase of the Cincinnati, Portsmouth & Virginia Railroad put the Norfolk & Western into Cincinnati in 1901. The Norfolk-Columbus/Cincinnati main line plus branches to Hagerstown, Md., and Winston-Salem and Durham, N.C., constituted the major part of the “old” Norfolk & Western, a coal carrier operating trains between the Ohio River and tidewater.

The Pennsylvania Railroad began purchasing N&W stock in 1900, and by 1964, Pennsy owned about one-third of N&W’s stock, either directly or through a subsidiary holding company. The Pennsy treated the N&W as an investment, not a fief, despite superficial resemblances — mostly those signals and the red paint.

Between 1915 and 1924, N&W electrified 56 route-miles between Iaeger and Bluefield, W.Va., to increase the capacity of a line that included 2% grades and a 3,014-foot tunnel. A line relocation and a new tunnel in 1950 eliminated the need for the electrification, and the line reverted to steam power.

The N&W was the acme of coal railroading, and longer than any other coal road — well into the late 1950s — it burned in its locomotives what it hauled in its hopper cars. N&W built many of its steam locomotives in its Roanoke Shops, experimented with a steam turbine-electric locomotive, and explored what modern servicing facilities could do for steam locomotive operating efficiency.

The tide of the coal movement was generally westward to the Great Lakes until the mid-1950s, when there was a demand for high-grade coal in Europe. That change in the direction of the flow may have precipitated the first in a long string of mergers. Eastbound coal on N&W had to cross several summits; on the parallel Virginian Railway it had a gentle descent most of the way. N&W had applied to lease the Virginian in 1925 and was denied permission by the Interstate Commerce Commission. In 1959, the situation was different. There was surprisingly little protest, and the ICC moved quickly. Merger took place on Dec. 1, 1959.

In 1962, N&W purchased the Atlantic & Danville, a line running from Norfolk west to Danville, Va., 211 miles, and reorganized it as the Norfolk, Franklin & Danville. Much of this line has since been abandoned.

The merger plans of the Pennsylvania and the New York Central created a merger frenzy north of the Ohio River and east of the Mississippi.

Norfolk & Western moved quickly. N&W acquired the Nickel Plate, the Wabash, the Pittsburgh & West Virginia, and the Akron, Canton & Youngstown. To connect them to the N&W proper, it then acquired the Pennsylvania’s line from Columbus to Sandusky, Ohio, which crossed the AC&Y at Chatfield and the Nickel Plate at Bellevue. The merger, leases, and purchases took effect Oct. 16, 1964.

Less than a year later, on Aug. 31, 1965, N&W and Chesapeake & Ohio (plus Baltimore & Ohio and Western Maryland) announced merger plans, offering to include Reading, Central Railroad of New Jersey, Erie Lackawanna, Delaware & Hudson, and Boston & Maine. It would have created a system about the same size as Penn Central. N&W and C&O stockholders approved the merger, and by the end of 1969, there were only two opponents, Penn Central and the state of New York. N&W and C&O were confident that merger would take place within a year.

Ironically, Penn Central had its way. PC’s bankruptcy on June 21, 1970, and the ensuing bankruptcies of several other Eastern railroads changed the situation. On April 22, 1971, the boards of N&W and C&O canceled the proposed merger. A residue was the ownership of Erie Lackawanna and Delaware & Hudson by an N&W subsidiary, a holding company named Dereco. 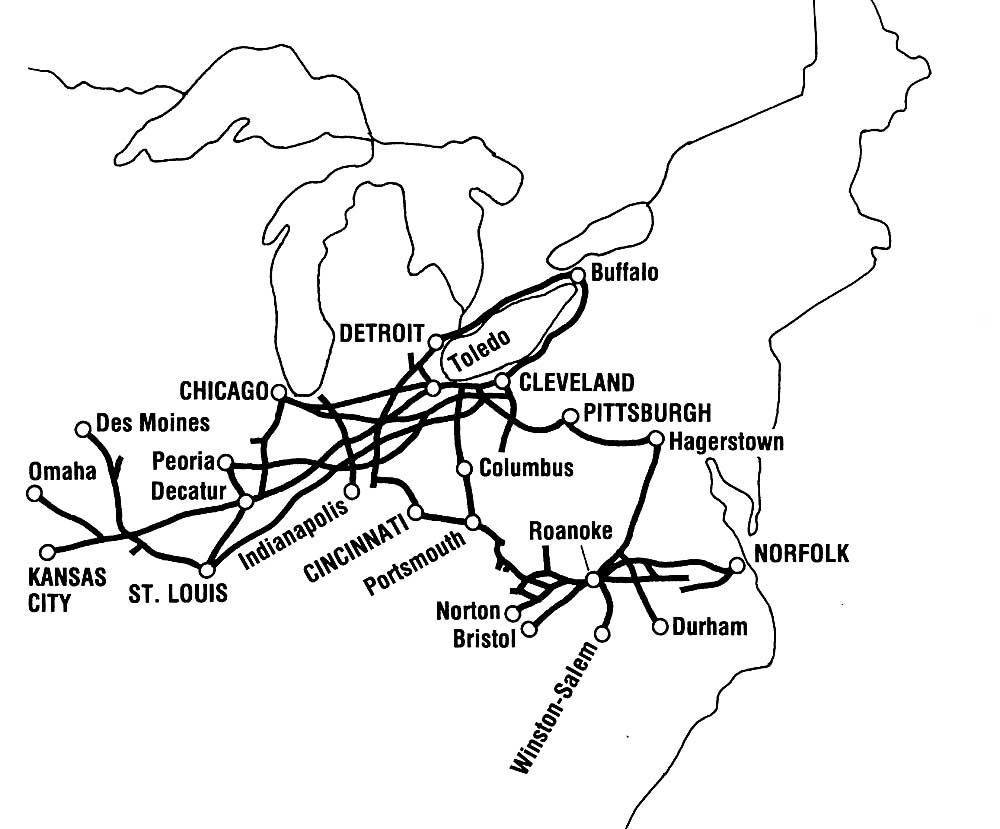 N&W purchased the Illinois Terminal on Sept. 1, 1981. Corporate existence of the IT and of the Akron, Canton & Youngstown ended in 1982.