The Milwaukee Road is Classic Trains' Railroad of the Month for November 2021. 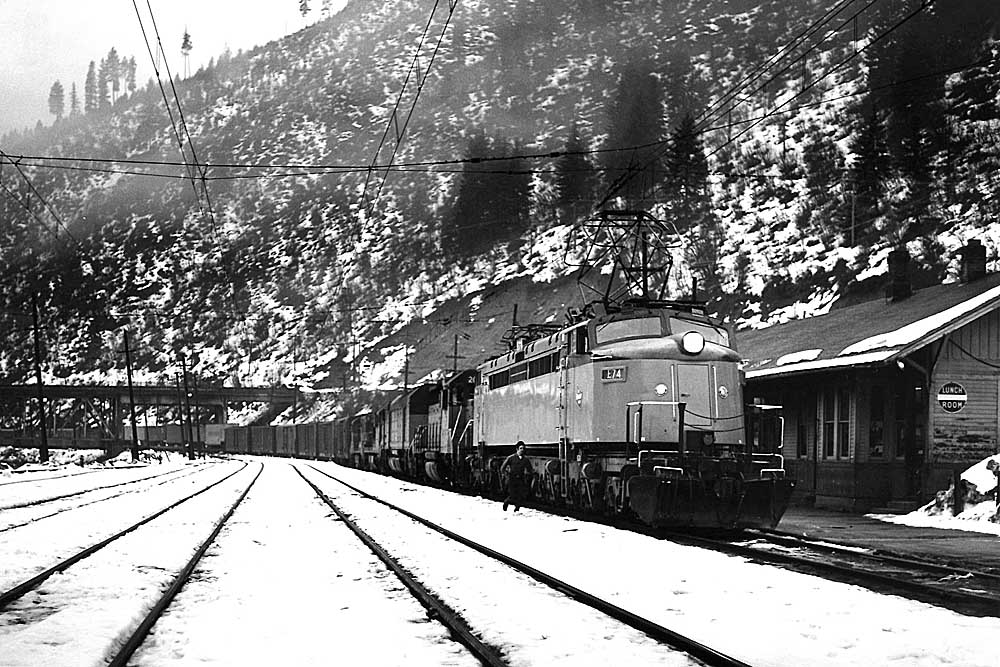 This late 1940s view of the Milwaukee Road’s new Bensenville Yard west of Chicago shows the yard still under construction. A four-unit EMD FT diesel set works in the foreground. The main line is at the top of the frame along the code line. Kaufmann & Fabry Co. photo

An eastbound Milwaukee Road freight from Savanna on the Mississippi River approaches Bensenville, Ill., in suburban Chicago in September 1945. The line was part of the Milwaukee’s link to the Union Pacific at Council Bluffs, Iowa, but also carried traffic from Kansas City, the Twin Cities, and northern Iowa. Henry J. McCord photo

A smoking steam locomotive hauls a typical branchline freight along the Milwaukee Road’s line between Monticello and Broadhead in southwest Wisconsin in the mid-1950s. Classic Trains collection

The Milwaukee Road operated a cramped yard along the St. Joe River in Avery, Idaho, where the railroad switched to and from electric power. Here, a two-unit boxcab electric moves a single Pennsylvania Railroad boxcar while an FT diesel set works in the yard. Classic Trains collection

Milwaukee Road “Little Joe” electric locomotive E74 has been added to the point of eastbound train 262 at Avery, Idaho, in February 1971. By this time the Milwaukee used electric propulsion to aid diesel-powered freights over the mountains of southern Idaho. Electrified territory extended from Avery east to Harlowton, Mont. The wires came down in 1974. Tom Brown photo

Milwaukee Road train 203, led by a Union Pacific U30C and two Milwaukee GP40s, leans into a cure and begins to drop downgrade west of Davis Junction, Ill., en route from Chicago to Council Bluffs, Iowa., in August 1976. The Milwaukee operated over a Burlington Route branch that crossed at Davis Junction to serve Rockford to the north and Rochelle, Mendota, and coal fields to the south. David Franzen photo

EMD F units bring a Milwaukee Road freight along shuttered St. Paul Union Depot in August 1975. All types of cars are visible in the train, including finished automobiles. That’s the riverboat Delta Queen at right. George A. Forero Jr. photo

Milwaukee Road U25B No. 5000 leads a log train in Washington State in the 1970s. The Milwaukee served numerous logging concerns south of Tacoma and even had its own log cars. Many were conveyed to short lines when the Milwaukee left the state in 1980. Keith E. Ardinger photo

An eastbound Milwaukee Road freight waits on the westbound main at New Lisbon, Wis., in May 1979 for the passing of a “Sprint” intermodal train. The Milwaukee operated the Sprint trains between the Twin Cities and Chicago on an expedited schedule with reduced crews. Phillip Tygum photo

In its history, the Milwaukee Road operated freight service from as far as Louisville, Ky., west to Tacoma, Wash., and Portland, Ore. It served as a vital connection to the Union Pacific at Council Bluffs, Iowa, hustling reefers east to Chicago. Much of its operations were in agricultural regions of Illinois, Wisconsin, Iowa, Minnesota, and South Dakota. It also hauled coal from Illinois and Indiana and logs and lumber from Washington.