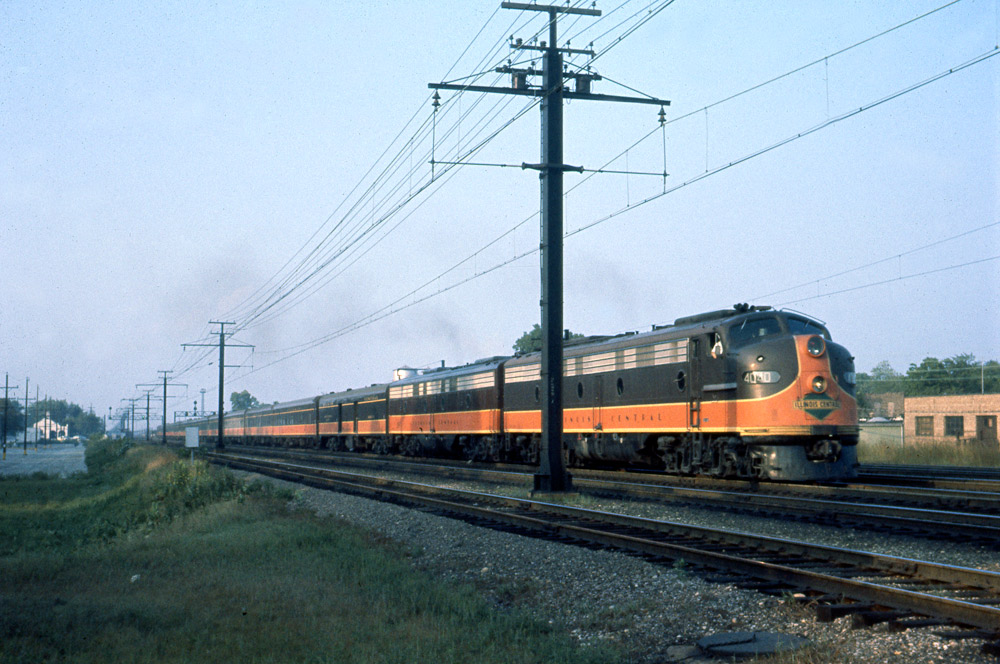 History of the Illinois Central Railroad

Illinois Central Railroad dated from 1851 when it was chartered by its home state to build a line from Cairo, at Illinois’ southern tip — the confluence of the Ohio and Mississippi rivers — to Galena, in the northwestern corner of the state and at the time a mining center. Soon added was the “Chicago Branch” from Centralia (named for the railroad) northeast to the growing city on the Lake Michigan shore. The “branch” would soon become the railroad’s principal route.

After its 19th-century growth, the IC had a stable system until its 1972 merger with the Gulf, Mobile & Ohio to form the Illinois Central Gulf.

During the 1940s, ’50s, and ’60s the IC was a conservative, traditional railroad. It used steam power for freight service into 1960. It carried great quantities of coal north from southern Illinois, and it ran fast merchandise freight trains up and down the Mississippi valley. Its passenger operations included an intense suburban service from Chicago, electrified in 1926, as well as a fleet of streamliners to St. Louis, and New Orleans, and on its Iowa Division. During the passenger-train decline of the 1960s, many observers considered IC’s Chicago–New Orleans Panama Limited to be the best train in the country.

As Illinois Central Gulf, the company bought some short lines in the 1970s, then in the mid-1980s sold off a large number of lines (including nearly all the former GM&O) to entrepreneurs who created shortline and regional railroads. IC shrank to about 40 percent of its pre-1970 size, then later bought back some of those new 1980s lines. ICG went back to being Illinois Central in 1988 and returned to black on its locomotives to replace the IC orange-and-white livery from the ’60s, which ICG minimally modified before trying, briefly, solid orange and then an unattractive gray-and-orange.

When the IC was chartered in 1851, a previous undertaking had resulted in a few miles of grading, but nothing else. The IC was aided, however, by an 1850 land-grant act. Finished in 1856, the IC was a Y-shaped railroad with its junction just north of Centralia. The IC gave Chicago an outlet to the Mississippi River for north-south traffic, and the railroad operated a steamboat line between Cairo and New Orleans.

On the southern front, IC entered into a traffic agreement with the New Orleans, Jackson & Great Northern Railroad and the Mississippi Central Railway. The former had been opened in 1858 from New Orleans north through Jackson, Miss., to Canton, Miss.; the latter was completed in 1860 from Canton north to Jackson, Tenn. IC completed its own line between Jackson, Tenn., and Cairo in 1873. (Traffic had previously used the Mobile & Ohio Rail Road between Jackson and Columbus, Ky., and a riverboat between Columbus and Cairo.) In 1874 the IC took over the NOJ&GN and MC.

In the 1870s railroads began to penetrate the fertile Yazoo Delta along the western edge of the state of Mississippi. IC’s entry was the Yazoo & Mississippi Valley Railroad, incorporated in 1882 to build west from Jackson, Miss. Meanwhile, a north-south rival, the Louisville, New Orleans & Texas, was under construction between Memphis and New Orleans via Vicksburg and Baton Rouge, west of IC’s line. That company obtained the backing of C. P. Huntington, who saw the route as a connection between his Southern Pacific at New Orleans and his Chesapeake, Ohio & Southwestern at Memphis.

Huntington’s forces completed the LNO&T in 1884, then purchased the Mississippi & Tennessee Railroad, whose line from Memphis southeast to Grenada, Miss., funneled traffic to the IC. Saber-rattling ensued, but Huntington’s empire was in financial trouble. IC purchased the LNO&T and the Mississippi & Tennessee and consolidated them with the Yazoo & Mississippi Valley. This all increased IC’s mileage by 28 percent and greatly expanded its presence in the South.

IC’s southern lines were connected by rail to the northern part of the system in 1889 with the completion of the Ohio River bridge at Cairo. In 1893 IC purchased the Chesapeake, Ohio & Southwestern (Louisville to Memphis) and in 1895 built a line into St. Louis from the southeast, near Carbondale, Ill.

IC’s original line had been extended west from Galena, Ill., to the Mississippi River, then across Iowa by leasing the Dubuque & Sioux City Railroad, which reached Sioux City in 1870. In the late 1880s under the leadership of E. H. Harriman, the road undertook a westward expansion program. The Chicago, Madison & Northern was incorporated in 1886 to build from Chicago to a connection with the Centralia–Galena line at Freeport, Ill., then north to Madison, Wisconsin’s capital, with a branch to Dodgeville, Wis., in another mining area. IC also built branches to Cedar Rapids, Iowa; Sioux Falls, S.Dak.; and Omaha, Nebr.

In 1906 the IC completed a line from Effingham, Ill., east to Indianapolis. In 1908 it assembled a route from Fulton, Ky., to Birmingham, Ala., largely on trackage rights, and in 1909 it acquired control of the Central of Georgia. In 1928 IC built a cutoff line between Edgewood, Ill., south of Effingham, and Fulton to bypass congestion at Cairo; modern engineering made this a preferred freight route over the hill-and-dale country south of Carbondale on the original route.

After World War II, IC began to simplify its corporate structure, absorbing the Yazoo & Mississippi Valley and the Gulf & Ship Island (in southeastern Mississippi), purchasing the Chicago, St. Louis & New Orleans, and acquiring control of the east-west Alabama & Vicksburg and Vicksburg, Shreveport & Pacific, which had been leased by the Y&MV.

In 1968 Illinois Central acquired the western third — Nashville to Hopkinsville, Ky. — of the Tennessee Central when that financially ailing line was split among IC, Louisville & Nashville, and Southern.

Illinois Central and parallel Gulf, Mobile & Ohio merged on August 10, 1972, to create the Illinois Central Gulf Railroad, a wholly owned subsidiary of Illinois Central Industries. GM&O was a likely merger partner for Illinois Central, as it was a north-south railroad through much the same area as IC. As part of the merger, ICG took over three Mississippi lines: Bonhomie & Hattiesburg Southern; Columbus & Greenville; and Fernwood, Columbia & Gulf.

The north-south lines of ICG’s map resembled an hourglass. Driving across Mississippi or Illinois from east to west, you could encounter as many as eight ICG lines. The former IC system converged at Fulton, Ky., and the former GM&O main line was less than 10 miles west of Fulton at Cayce.

ICG soon decided that the east-west lines did not fit with a north-south railroad. Its 515-mile Chicago–Council Bluffs route was the longest of the six post-World War II railroads connecting those cities.

The Louisville line ultimately proved more valuable for its route to Memphis from the north than for the line east to Louisville. The Mobile–Natchez route had a ferry, not a bridge, at its west end, and the connecting railroads west of the Mississippi River led mostly to junctions with the Meridian–Shreveport line. In most cases, use of one of ICG’s east-west lines as a bridge route required one of the connecting roads to short-haul itself.

ICG’s slimming down included not only routes but track and rolling stock. More than half its Chicago–New Orleans main line was double track; IC reduced it to single track with a computerized CTC system. IC scrapped its surplus freight cars and sold its excess locomotives. It turned its attention to long-haul business between Chicago and the Gulf of Mexico.

On Feb. 29, 1988, the railroad changed its name back to Illinois Central, having divested itself of nearly all the former GM&O routes it acquired in 1972, when it added “Gulf” to its name. At the end of 1988 the Whitman Corp. (formerly IC Industries) spun off the railroad, which then dropped “Gulf” from the name, and in August 1989 control of the railroad was gained by the Prospect Group, which formerly controlled spinoff MidSouth Rail.

IC managers eventually turned their eyes west, to the Chicago, Central & Pacific, which it had sold in 1985. It saw CC&P’s route as a source of grain traffic and perhaps a way to get some of the coal moving east from Wyoming. In June 1996 IC purchased the CC&P. The line remains active.

In February 1998 Canadian National Railway agreed to purchase the IC, creating a 19,000-mile railroad. CN absorbed IC in July 1999, and IC lost its own identity within the CN system.