The Delaware, Lackawanna & Western is Classic Trains' Railroad of the Month for March 2022 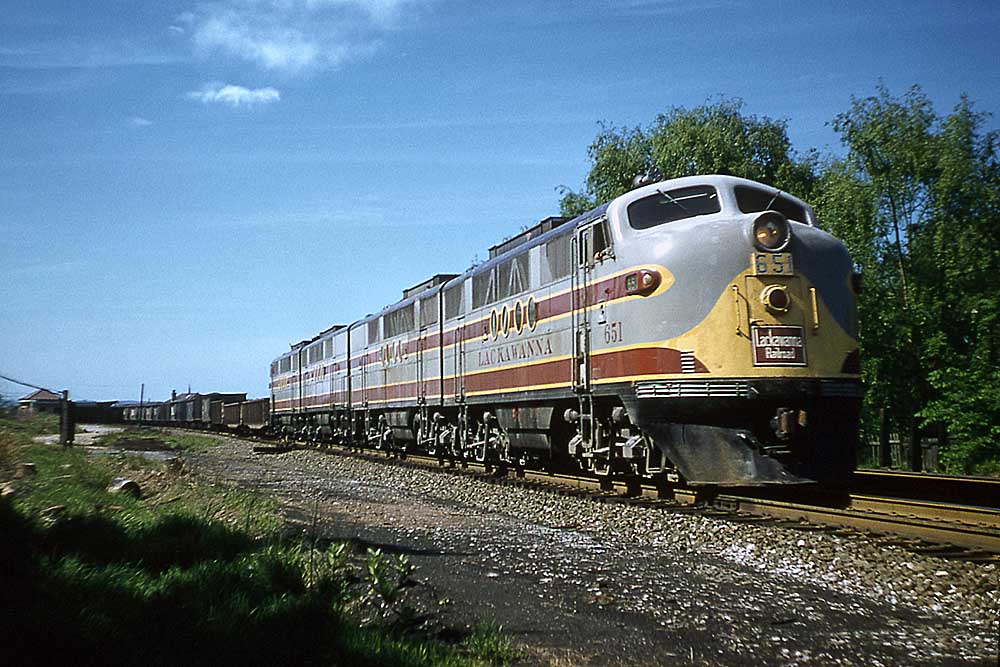 Lackawanna used three-cylinder 4-8-2s for both passenger and freight service. The freight engines, like No. 2230, shown at Wharton in 1941, were more successful and remained three-cylinder engines until they were scrapped after World War II. W. R. Hicks photo

On the last day of May 1951, a four-unit set of low-geared FTs shoved on the rear. (2 of 2) The wooden caboose is positioned behind the helper owing to the limited buffing strength of the underframe. Bill Price photo, Al Chione collection

Two of DL&W’s 18 RS3s approach West End Tower on the Boonton Branch in 1951 with empty hoppers bound for Hoboken. The Alcos were unique on the road in having sans-serif lettering. Bruce Owen Nett photo

Even though it was taken in 1970, well into the Erie Lackawanna era, this overview shows the Lackawanna’s freight (and passenger) facilities at Hoboken, N.J., well. At left are Piers 1 through 5 (2 abandoned), Pier 6 (with trestle for grain loading), Export Yard, and the former grain coal yards. Fred W. Schneider III photo

The Delaware, Lackawanna & Western’s main line extended from Hoboken, N. J., northwest through Scranton, Pa., and Binghamton and Elmira, N. Y., to Buffalo. Long branches reached north from Binghamton to Utica and to Syracuse and Oswego and southwest from Scranton along the Susquehanna River to Northumberland, Pa. The DL&W was an anthracite coal carrier, thus Lackawanna freight trains carried vast amounts of coal. The road also developed general merchandise traffic. In the early years of the 20th century, with an eye to speeding up its trains, the road undertook several line relocation projects characterized by heavy earthworks and tall concrete viaducts.