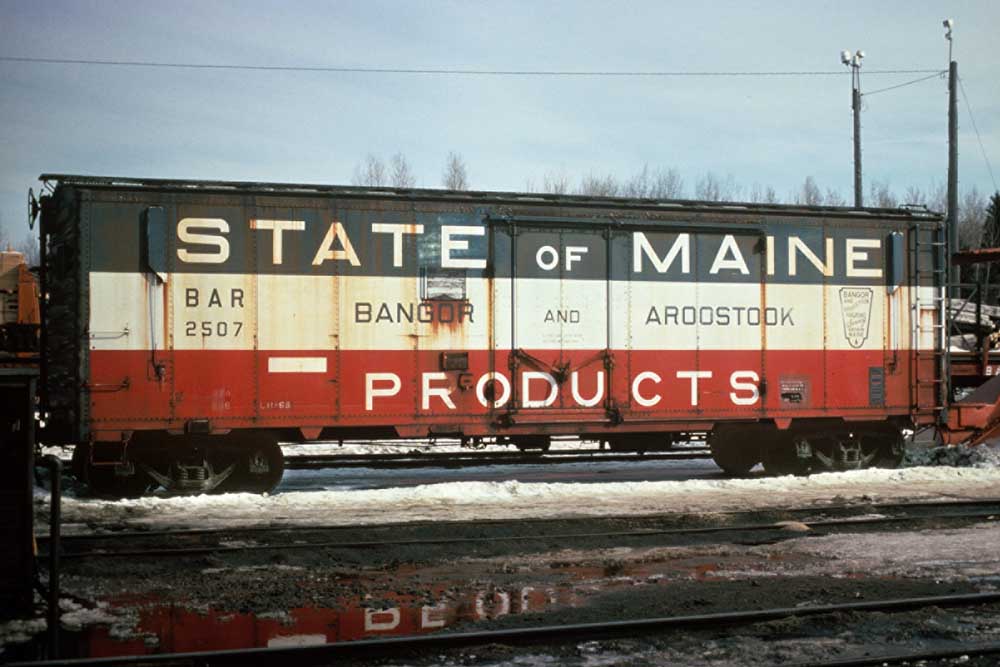 Northern Maine’s Bangor & Aroostook Railroad was a relative latecomer to the American railroad map, being organized under the General Laws of Maine on Feb. 13, 1891. There had been earlier efforts, but this one succeeded in linking northern Maine to the central Maine city of Bangor and the country’s rail network.

First was the Bangor & Piscataquis, incorporated on March 6, 1861, to build northwest into Piscataquis County toward Moosehead Lake and Greenville, seeking lumber and farming traffic. B&P also would have a western connection with what would become Canadian Pacific. B&P’s eastern connection was with the European & North American (later a part of Maine Central) in Old Town, just north of Bangor. The first train ran on 5-foot, 6-inch-gauge track the 40 miles from Old Town to Dover and Foxcroft on Dec. 14, 1869; B&P was standard-gauged in 1877 to conform with its E&NA connection.

From 1870 to 1890, potato production in Aroostook County increased 60-fold despite high freight charges and circuitous routes to major markets. A Houlton man, Albert A. Burleigh, figured that with county support, Aroostook could have its own railroad. His plan was to finance construction with money loaned on the credit of the county. The idea swept “The County” like wildfire, and the Bangor & Aroostook Railroad would be born within a year.

Some local perspective: Aroostook (Ah-ROOS-took), is a county, the largest east of the Mississippi River at 6,821 square miles. It spreads across the full breadth of northern Maine and extends 130 miles along the state’s eastern border south from Madawaska, across from Edmundston, New Brunswick. The Aroostook River sort of cuts the county in half, running east through Caribou and Fort Fairfield.

It also should be noted that those of us living in Maine always have referred to the railroad as “the B&A.” Until 1915, everyone knew the pike by that label, but down in the more populous part of New England, New York Central’s subsidiary across Massachusetts, the Boston & Albany, was gaining recognition with those initials, so in the mainstream railroad world, Maine’s B&A became “BAR,” for its reporting marks.

Under Burleigh’s plan, the new railroad would start north from a junction with the B&P in Brownville and head for Houlton, Presque Isle, and Caribou, with a branch from Dyer Brook Plantation (Oakfield) to Ashland. Bangor & Aroostook leased the B&P on April 1, 1892.

During mid-April 1893, construction forces installed the first Bangor & Aroostook Railroad switch at Aroostook Junction in Brownville, and the great undertaking was begun. In spite of dense forests, black flies, food shortages, and unpredictable weather, the first train reached Houlton, in a snowstorm, on Dec. 16, 1893.

Track-laying continued northward from Houlton in 1894 at up to a mile and a quarter a day through Mars Hill to Presque Isle. Caribou was reached on Dec. 17, 1894, and meantime the branch to Fort Fairfield was completed. The Patten-Sherman line (southwest of Island Falls) was opened in 1896, Caribou-Limestone in ’97, Caribou-Van Buren in ’99, and the Ashland Branch to Fort Kent in December 1902. A line from Fort Kent west to St. Francis was built in 1909, and the next year, the final line in far north Aroostook County, Van Buren-Fort Kent.

Further expansion included a low-grade cutoff between Squa Pan on the Ashland Branch and Stockholm (southwest of Van Buren) on the main line; a branch to Presque Isle; and — east of Brownville — a 28-mile low-grade line, known as the Medford Cutoff, between South Lagrange and West Seboois. With those, the B&A had a two-track main line almost all the way from Millinocket to the Bangor area.

Two other important lines would be built. A large paper mill, which would become known as Great Northern Paper, was developed in Millinocket, and the Bangor & Aroostook Railroad built a spur from Millinocket station to the mill in 1899. GNP soon became B&A’s most valued customer and remained so for decades. In 1904, B&A President Franklin Cram was trying to find a way to build a line to a seaport outside the area served by Maine Central so the B&A could control the freight rates and provide GNP a through route to an ice-free port. Surveyors marked a route between South Lagrange and Searsport, and the Northern Maine Seaport Railroad was incorporated December 1, 1904, to build the new line to the sea. It was leased to the B&A on June 27, 1905, and finished by that November. As part of the Searsport line, B&A established an interchange with Maine Central in the town of Hermon, 6 miles west of Bangor, called Northern Maine Junction. This would eventually lead to abandonment of the line from South Lagrange to Old Town.

Another major undertaking was to establish a system backshop, near Milo. It was such a desolate location that the railroad also built a town there, which become known as Derby. The shops remain in operation today.

The last new Bangor & Aroostook Railroad rails laid were those of the international link from Van Buren across the St. John River to St. Leonard, N.B., by the Van Buren Bridge Co., completed May 1, 1915, to link with a Canadian National predecessor. B&A could now prosper by moving paper, potatoes, and lumber products to tidewater at Searsport, to Canadian Pacific at Brownville Junction, to Maine Central at Northern Maine Junction, or into Canada at St. Leonard. 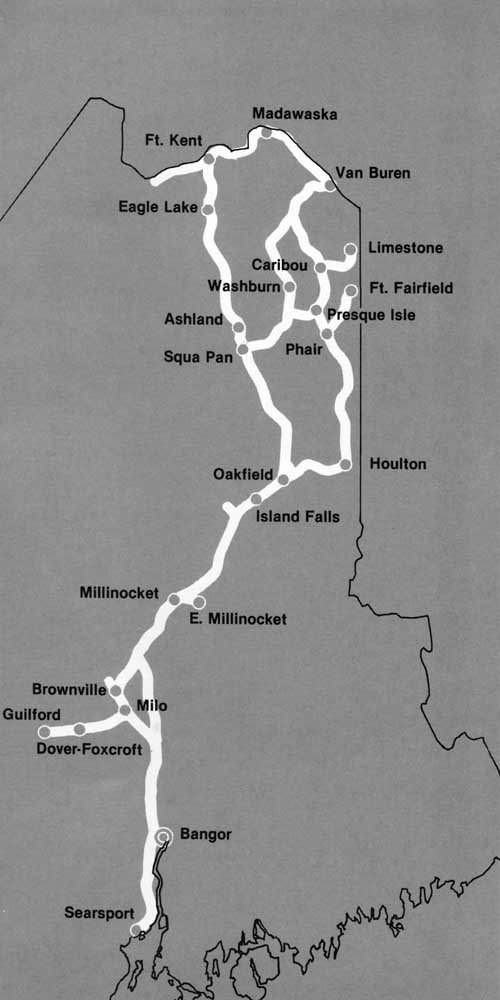 Bangor & Aroostook’s Railroad passenger service was a modest affair, although the railroad took good care of its passengers. Two through Bangor-Van Buren trains a day in each direction carried most of the business, and a daily local ran each way between Milo and Greenville (west of Brownville, also on CP).  An Oakfield-Fort Kent train connected with a local to St. Francis, which during Prohibition became known as “the Gin Train” because Fort Kent is across the St. John River from Claire, N.B.

The Bangor & Aroostook continued to make money through the Depression and into the 1950s. With new roads being built in northern Maine, however, rail freight and passenger business began to suffer, so the B&A took an unusual track. On Nov. 23, 1936, the first bus operated by the newly formed Bangor & Aroostook Transportation Co. left Limestone for Presque Isle. This was the beginning of the end of B&A’s rail passenger service, which finally went to all-bus on Sept. 4, 1961. It wasn’t that the railroad didn’t try, as it introduced three lightweight passenger coaches and two 6-section/4-double-bedroom/6-roomette sleepers in 1949. These cars were the mainstay of the Aroostook Flyer and the Potatoland Special. B&A’s bus service ended in January 1984.

Bangor & Aroostook was fully dieselized in less than four years, as the last steam ran on July 22, 1951, on the Greenville Branch, after delivery of 12 GP7s that were shared with the Pennsylvania Railroad. Five GP9s in 1954 finished B&A’s “first-generation” fleet.

Freight business thrived into the late 1950s, when the railroad — helped by toy-train-maker Lionel’s version — became famous for its red-white-and-blue refrigerated boxcars for potatoes that proudly proclaimed “State of Maine Products.” But even those colorful cars couldn’t turn the tide, as the numbers on the accounting sheets were getting closer to a break-even point each year.

In an effort to diversify, Bangor & Aroostook Railroad in 1960 became Bangor Punta Corp., acquiring a commercial finance company; a manufacturer of sea skiffs; and a large engineering, manufacturing, and foundry firm in San Francisco.

Bowing to trends, the railroad began to shrink its physical plant in 1962, abandoning the Greenville Branch, but the future seemed to brighten on Oct. 2, 1969, when F.  C. “Buck” Dumaine bought the railroad from Bangor Punta. The B&A no longer had to pay dividends to Bangor Punta, which was good, because revenue declined to a drastically low level in 1970. It took a lot of belt-tightening, as well as leasing a large number of non-mechanical refrigerator cars for fresh fruit and vegetable traffic. Regardless, the next few years saw the end of potato traffic. B&A tried to keep the business, but it was dependent on its rail connections, and a big one to the south, Penn Central, didn’t deliver loads in a timely manner, while trucks did.

Meantime, there were bright spots. In December 1976, the B&A began the annual “Turkey Train” to distribute a free turkey to every employee, a tradition that lasted until 1994. In 1983, President Walter Travis worked with the mechanical department to design a new locomotive paint scheme. After a few schemes were tried, the former dark blue with gold trim (which had succeeded the original but hard-to-see gray and off-white, then an attractive blue and off-white) began to disappear in favor of a vermilion, black, and gray livery that carried into the mid-’90s. The eight GP38s from 1966-67 got the new paint first, and then the first-generation F3s and BL2s. Owing to good care by the mechanical forces, B&A’s first-generation units made it well into the 1990s, and some even still operate in 2009. Preserved in museums or on tourist lines are two of the BL2s (54 and 557, given its original number and named American Railfan) and two of the F3s (44 and 46).

By the early ‘90s, owing to dwindling revenue and soaring operating costs, it was time for major changes. The first, in 1994, was the purchase from CP of the line from Brownville Junction west through Greenville to Sherbrooke, Quebec, after CP had received permission to abandon the Canadian portion.

Next was the sale of the railroad to Iron Road Railways Inc. in March 1995 — the beginning of the end for the Bangor & Aroostook Railroad as we in Maine knew it. Iron Road’s eventual failure was helped by a partially failed recapitalization; a 15 to 20 percent drop in revenue owing to service problems with cars destined to former Conrail points after the 1999 split of CR to NS and CSX; and the 1997 change that saw the Association of American Railroads go to an automated car-hire system. Historically, the B&A had enjoyed the use of funds collected on behalf of other carriers for interline moves for a period of 30 to 90 days, but with the change, it faced a cash drain of millions, and had to come up with up to $5 million to clear the accounts.

These were the major factors that forced Iron Road into bankruptcy on Aug. 15, 2001. After receiving several offers, the bankruptcy court in Boston approved the sale of the Bangor & Aroostook Railroad to Rail World, of Chicago, headed by former Wisconsin Central Ltd. President Ed Burkhardt. The sale closed for $55 million on Jan. 9, 2003, and after 111 years, the Bangor & Aroostook Railroad ceased to exist, as the property assumed Rail World’s new name, the Montreal, Maine & Atlantic Railway.